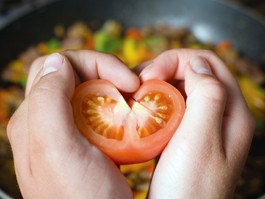 Sundays in the kitchen with Food Not Bombs, a love story

Several large plastic bags filled with French loaves, polenta rounds and garlic sourdough are stacked on my front porch most Sunday mornings. On a lucky day, a few paper grocery bags bursting with apple pies, tiramisu and boxed cookies accompany them. If the gods are smiling on me, my daughters are still asleep while I mosey around in my pajamas and geeky lavender slippers sipping tea, Tin Hat Trio on the stereo, Nag Champa wafting through the air. At some point, I set down my chipped tea mug and clean the kitchen before the Food Not Bombs cooks, due to arrive in the early afternoon, stumble into my disheveled home.

The national Food Not Bombs movement has evolved over the years and through the changing times like any grassroots organization. Founded in 1980 by antinuclear activists in Cambridge, Mass., Food Not Bombs established itself as a direct-action group with the agenda of sharing food and information with people in public spaces without permits and without hierarchical organization. The group focuses on the preparation of mostly vegan and always vegetarian food to instill a further sense of nonviolence; no animals need to be killed in order for diners to fill their bellies.

With chapters now branching out across the globe, peace-minded folks everywhere gather in private kitchens to save visually unappealing but perfectly safe and healthy produce from compost piles and dumpsters, creating meals for hungry and less fortunate community members. In a country that wastes ungodly amounts of money on preparing for and recovering from wars while hungry people walk the streets, it is absurd to Food Not Bombs groups that so much perfectly edible food would be thrown out.

The North Bay Food Not Bombs movement began with humble, short-lived efforts during the first Gulf War and was reborn in the late 1990s at the height of the local Police Accountability and Earth First! movements. Bagels with hummus, along with hearty soups and modest salads, were served on Sunday afternoons in Santa Rosa’s Courthouse Square while budding revolutionaries gathered to analyze the latest mass media news, organized actions at Headwater’s Forest in Humboldt County or recapped the highlights of recent punk and hip-hop shows. These days, as word of the wars in Iraq and Afghanistan are accompanied by the healthcare debate and immigration issues, the conversations are tinted with a sense of overwhelm, yet focus more on local, sustainable remedies for the world’s nightmarish problems.

I feel eternally indebted to Food Not Bombs, and so have offered my tiny Santa Rosa kitchen as a community cooking site on countless Sundays for over six years. After leaving an unhealthy relationship in 2002, I found myself homeless with two little girls, then ages two and six, in tow. With no nearby family and a bank account gutted by my drug-addicted ex, the only place I knew I could turn for food and support was the Food Not Bombs House, which was then located on South E Street in Santa Rosa.

This is where my daughters learned to cook and began to understand the value and importance of community. I spent Sundays tearing bread apart for stuffing, slicing onions until my eyes nearly bled and talking smack about racist cops, the pending war in Iraq and the latest gossip about which Earth First! activist was sleeping with which bass-playing punk rocker and who had sold out by dating a corporate accountant.

Now in my own home across town, I never know who or what to expect as I hear that first knock on the door each Sunday around 2pm. Some days, it’s a group of young SRJC students, grasping banjos, Foucault tucked under arms, just starving for talk of revolution. Other days, it’s a neighbor and his children who come to cook with me as we share parental anecdotes and laugh over our backyard chickens. In one sense, I have grown from a young and eager revolutionary to being a pseudo-historian, weaving my radical opinions and personal experiences into stories that are shared while slicing zucchini or opening a gazillion cans of tomato sauce for a very creative minestrone soup.

Quite often, the produce is the last element to make an appearance. This is usually a result of poor communication on the FNB listserv. Some sweet soul—whoever has a car—is enlisted to dart across town to Community Market and snatch the crates of produce they have so kindly saved for us. Upon return, the driver’s efforts are met with excitement or amusement. What exactly does one do with eight pounds of okra, 16 cucumbers and two crates of browning romaine? Or what happens when some well-meaning farmer donates 20 cases of rotting corn? The romaine is stripped to its core while the corn is picked through and the remaining, bug-infested ears are buried in the backyard.

Sure, there’s a Food Not Bombs handbook that can help guide cooks through food salvaging and preparation, but after nearly two decades of FNB volunteers whipping up and serving food to hungry mouths in Sonoma County, recipes have been passed down through the generations of activists much like elder Italian women share kitchen wisdom with grandchildren. Each time the cooking changes locations, a new seasoning is discovered. At my house, the rosemary stuffing would be accompanied by curried mashed potatoes. Across town, the potatoes are heavy with fresh garlic and the stuffing is covered with onion salt.

On a recent Sunday, the lucky hens cluck gleefully at the wilted dinosaur kale we’ve tossed to them and we roll up our sleeves and get to work. The CD has been switched over to a mix of the Coup and Animal Collective as laughter and steam intermingle in my overcrowded, tiny cooking space; mushroom stems are scattered over the table, squishy tomatoes leak juice down cutting boards and across countertops. As always, we focus on basics, lucky to have purchased an obscene amount of organic brown rice from the Redwood Empire Food Bank that will serve as a filler for the soup we’ve got boiling away on the stovetop.

A young, barefoot volunteer pulls some goji berries and kombucha from his knapsack and offers them to me, insisting that they’ll help with my fatigue while I peel potatoes into the sink. Our conversation has turned from seasoning recommendations and disappointment with Obama to a discussion of herbal remedies, Vipassana meditation retreats and the therapeutic use of psychedelics. An always chipper and hip female artist in the group suggests we watch a movie while the pots cook away in the oven, and we move from the kitchen to watch Letter to the President, a documentary about the birth of rap music. We wrap up in blankets with an almost Thanksgiving-like smell in the air and let the film unfold.

After the film ends, the other cooks help me sweep my filthy floor and load the pots, pans and serving utensils into the truck parked out front. We say our goodbyes. They are headed to serve the food in Courthouse Square, as they do every Sunday evening, and I am headed back into my pajamas to call it a night. After years of involvement, I have decided to reclaim Sundays for myself. The Santa Rosa Food Not Bombs food prep is moving on from the warm confines of my humble home and into its next incarnation with a new generation of energetic and dedicated activists.

I make some tea and sit at the table in my now-quiet kitchen. I think about how this room has been occupied by punks, hippies, school teachers, artists, parents, neighborhood kids, students, musicians, doctors, athletes, carpenters and everyone in between for years while my daughters thrived among them. I think about all that we have learned from them and the FNB movement. They may not be the feisty Italian grandmothers I might have longed for, but they are certainly my family.

Dani Burlison
Previous articleDec. 23-30: Across the Bridge
Next article“This Land Is Your Land” in ‘Up In The Air’