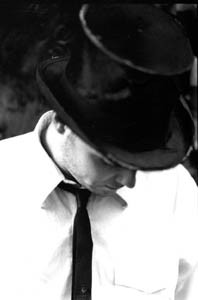 The New Face of the Accordion: Musician Mark Growden wields his accordion with the respect it deserves.

That the accordion is no longer dorky isn’t really noteworthy to Isabel Douglass or Mark Growden, although it’s good for the rest of us to know. Douglass plays the squeeze box in a romantic ensemble called Amaldecor. Growden leads three eclectic bands in similar, arm-pumping fashion. To them, the accordion is simply a means to make known the music churning through their heads.

Not everyone sees the instrument that way.

A short history of the modern attitude toward accordions would probably begin early last century, well before the electric guitar and well before anything could be called kitsch. Waltz, klezmer, Gypsy, tango–all were spoken in reeds, keys, chords, and buttons, and mostly by men wearing vests and funny pants who wielded their instruments like medicine balls. Fast forward through the decades, and the accordion falls out of favor with popular musicians though remaining a favorite of street and folk artists.

The accordion became less used mostly because popular music itself changed. Rock and jazz took over, and music made with accordions was banished to that section of the music store where most people wind up only when lost.

Its place there shouldn’t be undervalued. Anyone who has ever swung to zydeco or found themselves secretly enjoying Mexican radio while cruising through the Central Valley knows that, for some genres, the accordion never waxed or waned.

But when it comes to innovative, popular music, the accordion’s place is a little more complicated. A couple decades ago, the instrument started creeping back into popular formats, mostly as novelty or kitsch. While not exactly back-of-the-record-store stuff, it wasn’t Top 40 either. On Tom Waits’ 1987 album Frank’s Wild Years, which has Waits playing an accordion on its cover, the instrument is used on a few songs.

Some players, including Growden, don’t think Waits is the best example of accordion mainstreaming. Instead, he points to local musicians taking up accordions for real evidence of newfound popularity.

At any rate, for now we can agree that, Waits excepted, years ago only geeks and goobers played and listened to accordions. And if the rest of us were involved with the things, we did it just because it was kitschy enough to be cool. Cool in the same way that a grown woman carrying a Sesame Street lunch box is cool, or hosting B-movie pizza parties or wearing a Leave It to Beaver T-shirt.

Fast forward to 2002, and the accordion’s reputation has changed again. According to a new generation of players, the kitsch value is gone. Not just gone, but now irritating to artists who, although they don’t need to be taken too seriously themselves, at least want their music to be.

Understand? Go listen to Douglass’ and Growden’s bands. Both are playing at the 12th annual Cotati Accordion Festival, which takes place Aug. 24 and 25.

“Even people onstage can be really kitschy with [the accordion]. That just drives me crazy,” Growden says.

Growden, an energetic 32-year-old who lives in Oakland, reserves particular derision for performers who play up the cheese factor. Throwing on a mock shit-eating, crowd-pleasing grin, Growden rises in his chair to mimic a vest-wearing doofus, pumping bellows in the air in front of him. That brand of performer helps keep the accordion in the realm of the silly, where the instrument no longer belongs, he says.

Mark Growden’s band Electric Piñata, which formed about three years ago, will close the festival’s first day. He has two other backing bands, the Acoustic Piñata and the Prosthetic Piñata (it’s a cover band, get it?). Growden also performs solo.

His sound is hard to pigeonhole. Some have called him a more cabaret Tom Waits. Others have given him an “at-the-crossroads-of” label that places him in between folk, avant-garde, and who-knows-what. A typical show might have him on accordion, banjo, electric guitar, and lap steel guitar.

Growden, who also teaches music to children, is one of those rare musicians who plays a variety of instruments. “When I’m onstage and I’m performing, it’s all about the music; it has nothing to do with the instrument. The fact that I’m playing the accordion is totally irrelevant to me,” he says.

That’s why it irritates him that some still use the instrument as a prop.

Growden was introduced to music in school. For a long time, he concentrated on the saxophone and bass clarinet. He moved to the Bay Area about 10 years ago and came to the accordion after all of his other instruments were stolen.

That was about seven years ago. With nothing at home left to play, Growden found an old accordion in the basement of the elementary school where he was working.

This is Growden’s first year at the festival. It’s also the first time for Douglass’ band, Amaldecor. Don’t bother trying to figure out the name. Douglass says it’s a bastardization of a French phrase that means “heartache.” The five band members play old French and Eastern European tunes, occasionally delving into klezmer and jazz.

Douglass, whose first instrument was the piano, is 23 and has been playing accordion for seven years. She works at Boaz Accordions in Berkeley, and both she and Growden speak highly of owner Rubin Boaz, who repairs and sells accordions. Cotati Festival cofounder Clifton Buck-Kauffman gives much of the credit for the event’s ability to attract high-caliber performers to Boaz and his connections.

After picking up the instrument because she was traveling and wanted something portable, Douglass hooked up with an old Gypsy man in Romania. They played–and drank heavily–about five hours a day for a month, even though they didn’t speak the same language, Douglass says.

“I started playing music with the idea of it being something you do around the fire. It was an easy way to exchange [ideas] and meet people,” she says.

While that sentiment might itself sound kitschy, it’s surely one of the reasons why people continue to flock to Cotati’s festival. Besides modern sounds like Growden and Douglass, this year’s festival features performers playing ethnic music, such as Rahman Asadollahi, from Azerbaijan; Tameem, whose family is from Afghanistan; and Ramon Trujillo and the Mariachi Jalisco.

There are also some more folky gigs, as well as local performers, such as Petaluma’s O’Grady Family, who probably have never heard of Tom Waits and who brag about watching The Lawrence Welk Show together.

And, of course, there’s Dick Contino, who is to the accordion what Dick Dale is to surf guitar–a cheeseball virtuoso who, no matter how old he gets, still gets props for inventing a genre.

If you have trouble finding the festival, just look for the life-size bronze statue of cofounder Jim Boggio, another virtuoso who was playing in a local zydeco band when he met Buck-Kauffman, co-owner of Prairie Sun Studios.

The pair hatched the idea in a local bar. Boggio died a few years later. Buck-Kauffman likes to say that the statue is so realistic because they just dipped Boggio in bronze and mounted him in the park after he passed on.

Now the festival is a small town’s wet dream (it attracts 3,500 to 4,000 people each day; Cotati’s population is about 6,200). Not only does the multicultural event put Cotati on the map, it also raises tens of thousands of dollars each year for several community groups.

Buck-Kauffman says it works so well for a fairly simple reason: “Because the community is involved. When the [nonprofit] beneficiaries get so much money, there’s really an impetus for them to get involved. It’s just interwoven into the fabric of the community.” Among other things, those groups provide volunteers to staff the festival.

By performing there, musicians like Growden and Douglass become part of that community, expanding its boundaries, geographically and otherwise. Look for them onstage, but don’t expect them to be speaking kitsch. Instead, they’ll just be pumping away, all the while improving the reputation of the poor, misunderstood accordion and its reeds, keys, chords, and buttons.