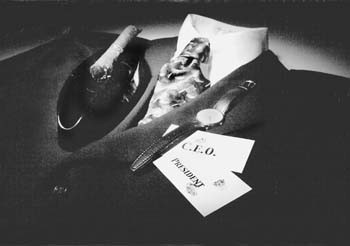 Crime in the Suites

How Armani-clad crooks are robbing U.S. taxpayers of $3.8 billion each year

THERE’S A CRIME wave under way in America, but the Powers That Be are getting sore necks from looking the other way. I’m talking about corporate crime. When it comes to robbing us blind, the Armani-clad criminals in corporate boardrooms have it all over the hoods on the street. The FBI reckons that burglary and robbery cost U.S. taxpayers $3.8 billion annually. Securities traders alone cream four times that amount from their clients in fraudulent deals every year.

And as far as white-collar crime goes, securities fraud is small potatoes. From oil spills to price-fixing to peddling defective or dangerous products, corporations are responsible for the costliest and deadliest crimes in this country.

Yet when it comes to enforcing the law and meting out punishment, corporations get treated with kid gloves so soft only their CEOs could afford them. They’re all but immune to the criminal penalties applied to regular citizens. Even when corporations get caught by their own egregiousness, committing acts so outrageous and heinous and on such a scale that the authorities grudgingly have to haul them into court, they’re usually subject to no more than civil penalties and fines. (Can you imagine some CEO getting dragged through grimy precinct hallways, fingerprinted, and thrown into a cell to wait for a frantic loved one to scrape together bail?)

Worse yet, they don’t often get caught, because corporate crimes don’t get investigated and prosecuted with thoroughness, let alone zeal. Why not? Because most politicians would rather try to sandpaper a bobcat’s butt than crack down on corporations. Why would your average politico, who was elected with corporate campaign dollars–and is looking forward to re-election with more where that came from–hound his corporate sponsors for any of their misdeeds?

How well does corporate crime pay? Fraud by healthcare corporations alone costs us between $100 billion and $400 billion a year. And the savings-and-loan debacle, which former Attorney General Dick Thornburgh called “the biggest white-collar swindle in history,” cost between $300 billion and $500 billion. Each of these rip-offs–health care and the S&Ls–cost us 10 times as much as all the burglaries and robberies in America combined!

“Hold on,” you say. At least these suits aren’t killing innocent people with handguns or stealing old ladies’ purses at knife point. Not exactly–but while 19,000 people are murdered in the United States every year (mostly by people they know), 56,000 Americans die at work! They get deadly diseases like black lung, asbestosis, or more insidious poisonings. They get crushed in accidents or killed by a badly made product.

Twenty years ago, Ralph Nader started a magazine called Multinational Monitor, and here’s what it said recently about crime in the corporate suites:

* It’s pervasive–the dirty deals are done by even the largest and most well-established companies, like Alcoa, Borden, Bristol-Myers, Squibb, Chevron, Eastman Kodak, Exxon, General Electric, Hyundai, IBM, Mitsubishi, Royal Caribbean, Tyson Foods. All these companies were among the worst of the 1990s, judging by the size of the fines the courts made them pay (and these are just the few that didn’t get away).

* Any criminal prosecutions of corporate wrongdoers are almost invariably for “intentional or reckless acts” only, meaning that they get away with all sorts of things–including murder–because they “didn’t mean to do it.”

* The penalties visited upon these multibillion-dollar entities are pocket change to them. The fact is, except in those rare cases where a corporation is caught setting up a cartel or overtly fixing prices, corporate crime pays.

* Few violations lead to criminal prosecutions. Instead, many corporate crimes are improperly treated as civil violations, and many bad acts are just called “legal”–as in “it may be wrong to put out a poorly tested toy that chokes a toddler or two, but it’s legal.”

EVERY YEAR, in pursuit of what’s really happening inside the boardrooms of global corporations, Multinational Monitor names the “Top 100 Corporate Criminals,” based on the size of the fines the courts made them pay. Last year’s top 100 can be put in 14 categories, throwing a rare spotlight on the face of corporate criminality:

But, remember, most crimes in the suites never go to a jury, partly because there are so many ways for those who own the system to beat it:

* Guilty corporations can pre-emptively offer up some low-level exec to go to prison so that the real bosses stay free. (This guy is known as the Vice President in Charge of Going to Jail.)

* Companies that poison folks with nasty pesticides don’t go to prison because their lobbyists work hard in Washington to keep such poisons legal.

* Corporations that kill workers on the job–for instance, by speeding up the production line or allowing deadly hazards on the shop floor–get the deaths recorded as “accidents” so they aren’t investigated as homicides.

* And, of course, businesses routinely hand out fat campaign contributions (what amounts to legislative bribery) to any political party or candidate looking for a fast buck, and this isn’t even considered a crime. No surprise there, since corporate lobbyists work with elected officials to write the laws in the first place.

And even if they do get caught, the big guys have all the resources they need to defend themselves.

When Royal Caribbean Cruise Lines was caught polluting the oceans, it hired two former heads of the U.S. Department of Justice’s Environmental Crimes Section, two former U.S. attorneys general, two former U.S. federal prosecutors, a handful of former government officials and law professors, and (count ’em) four retired admirals to show up in court on the company’s behalf. Then it spent a fortune painting itself green–buying ads during the Super Bowl to tell us all how good the cruise shippers are for our environment, hiring ex-EPA officials to be on its board, and writing large checks to environmental groups.

The big crimes of our times

Let’s venture into the casebooks for some recent examples of crimes in the suites–but don’t hold your breath waiting to see any of these guys on the next episode of Cops.

* We all buy vitamins from time to time. Maybe you go for vitamins in a bottle. Or perhaps you just buy vitamin-enriched breakfast cereals or some other processed foods. In any event, for the last 10 years we’ve all been paying more for these vitamins than we should have because the smart guys at the pharmaceutical company Hoffman-La Roche Ltd. organized an illegal cartel among manufacturers–including fellow pharmaceutical giant BASF–to jack up the prices and fix them at above-market rates. The feds managed to nail Hoffman-La Roche and get a $500 million fine out of them after they were convicted in a Dallas courtroom. BASF was fined $225 million.

* Archer Daniels Midland, the grain company that purrs so reassuringly in its TV commercials and NPR spots, got caught in another antitrust swindle. These guys corralled all the companies that make citric acid–you drink it in soda, eat it in food, and use it in soaps, cosmetics, and drugs–as well as another acid that’s added to cattle feed, and got everyone to fix the prices for these two items. They also got all the manufacturers to agree on divvying up the market among them, with no one underselling anyone else. Ah, the wonders of competition, the magic of the free market.

* Louisiana-Pacific Corp. is our nation’s biggest manufacturer of laminated board, which is widely used in the construction business. The company’s big mill in Montrose, Colo., has monitoring gadgets placed at various points to measure pollution levels, as required by laws to protect the environment and the factory’s neighbors. Yet pollution continued to pour out of Louisiana-Pacific’s mill. Why didn’t the monitors catch it? A year and a half ago, the company pleaded guilty to rigging the monitoring equipment with foil, pulling off protective lenses, changing the dials, and finally turning the damned things off! The company paid $37 million in fines and is on probation for five years.

* Corning Inc. runs a medical laboratory called Damon Clinical Labs. The lab did blood tests for doctors, but it told docs with Medicare patients that three tests were always done as a package, and then it’d bill state and federal healthcare programs for the unnecessary tests, raking in about $40 million in fraudulent claims. U.S. Attorney Donald Stern quipped: “What was marketed as a LabScan was actually a massive lab scam.”

Some help is on the way

WHILE AN EVER-GROWING horde of crime-busting politicians supports “Three strikes and you’re out!” for scofflaws who happen to be human beings, big companies are allowed to flout one law after another in contracts paid for with our tax dollars–and not only do they get away close to scot-free, they also get more contracts and more of our tax dollars.

The Clinton administration, having presided over fewer prosecutions of corporate crimes than even the Bush White House, has now been shamed into promoting a “responsible contractor” regulation to prevent companies with a record of “substantial noncompliance” with labor, environmental, tax, antitrust, consumer, or employment laws from getting federal contracts, which add up to about $200 billion a year.

That’s hitting these greed machines where they live–but there’s so much more we could do. How about making businesses pay fines with equity, making them hand over shares in the company, thereby diminishing the value of the company and getting the attention of the shareholders?

When companies are put on probation, judges could appoint a supervisor (a probation officer, if you will) to keep an eye on these convicted criminals so that they don’t go and hurt someone else.

And we ought to require corporations to advertise their crimes as a form of punishment (imagine the “ADM–Super-Swindler to the World” TV spot).

The critical need, though, is for us–the people–to reassert our sovereignty over these offending entities by altering or revoking their state charters.

Ultimately, corporations exist only at the pleasure of you and me. The founders of our states and nation put strict limits on the corporate structure, establishing our right to set the terms of each corporation’s existence.

The authority to revoke corporate charters is still on the books of nearly every state, and it’s time for us to reassert some of the passion of 1776 by using that authority.

The issue is basic: Are the corporations going to rule or are we? The defining battle of our era is to re- establish citizen rule over our government, our economy, our environment, and our society–and this requires the defeat of today’s corporate autocracy.

This article originally appeared in The Hightower Lowdown, a monthly newsletter co-edited by Jim Hightower, former Texas commissioner of agriculture.