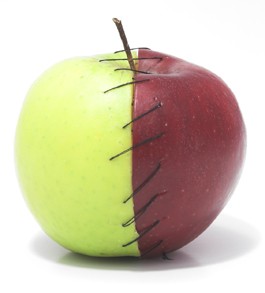 You know the rap. Eve feeds Adam the fig, the pomegranate, the apple, whatever—and all hell breaks loose. Once booted from the Garden of Eden, there’s no turning back. A cherub of death wields his bad-ass flaming sword to make damn sure of that. But it all comes down to that piece of fruit, a metaphorical stand-in for every nourishment to sustain life on this planet.

Ever since our proto-forebears’ Biblical goof, partaking of the God-only-knows-why-he-forbade-it Tree of Knowledge (Good and Evil hybrid varietal), our sad-sack species has confused, contorted and just plain misjudged most everything having to do with stewardship of anything other than our blatant self interests (and even here we’re guilty of monumental boo-boos). Then we developed recombinant DNA. After eons attempting to harness, coax, juice, ride and destroy Mother Nature, we’ve leaped beyond her all together.

In her engrossing, frightening but hope-filled and eminently readable new book, Uncertain Peril: Genetic Engineering and the Future of Seeds (Beacon Press; $24.95), Napa County environmental lawyer, journalist and author Claire Hope Cummings dives head-on into this fundamental question: Can we humans be expected to fully comprehend the consequences of our God-like actions? Of course the answer is no, but degrees of consequence vary, and with the development of modern GMO technologies, these degrees escalate exponentially.

Uncertain Peril addresses the extent to which these changes have already occurred. “Traditional plant breeding always respected the boundaries between species,” Cummings writes. “Genetic engineering not only recombines species and creates new life forms, but it uses novel molecules that nature could never produce.” So might GMO development threaten the world’s food supply or be a harbinger of even scarier stuff coming from the lab? According to Cummings, “Suddenly the long-simmering conflict over how to feed ourselves shifts to the question of whether we will survive at all.”

We’ve long assumed that agriculture first began between the Tigris and Euphrates rivers, spreading throughout the world from there. Recent research indicates that climatic-changing necessity essentially stimulated simultaneous development of agriculture in numerous world locales some 8,000 to 12,000 years ago. This newer evidence suggests a far wider ranging series of independent and yet curiously universal treatments and developments of seeds and seed crops.

Certain “centers of origin” produced foodstuffs uniquely adapted and developed for particular locales. “In Asia,” Cummings writes, “it was rice. In South America, it was potatoes.” Cummings concludes, “In each place there was a unique set of environmental and cultural conditions that gave rise to both the plants we now know as crops and the customs that formed around them.”

Now feast from the biotech garden and taste wordage like “GMOs,” “genetic engineering” and “transgenics.” While biotechnologies can technically include certain “natural processes,” Cummings uses all these terms in “referring to recombinant DNA technology, as it is used to breed new organisms by crossing species boundaries.”

Anyone up for a snoring ear of corn?

Biotech got its start in 1972 when UC biochemist Herbert Boyer and Stanford geneticist Stanley Cohen first realized they could break through biological barriers and, as Cummings writes, “extend the hand of man into the molecular world and assume the power to create new life on earth.” Boyer and Cohen went on to cofound Genentech along with venture capitalist Robert Swanson four years later. Genentech currently employs over 10,000 people, 3,500 of whom work in South San Francisco. Yet Genentech, controlled by the mega-pharmaceutical conglomerate Hoffman-La Roche, is but the tip of the Bay Area’s biotech industrial complex.

According to PricewaterhouseCoopers, venture capital investment in San Francisco’s biopharmaceutical industry topped $3 billion between 1995 and the first six months of 2001. That’s three bil seven years ago. Now consider the immense push for biotech in the seven years since, and what emerges is a modern-day Hydra birthing baby heads with each new capital investment. Granted, not all biopharming involves food crops, or even necessarily plants, but this is just one of multiple biotech apps vying for research funding.

I spoke with Claire Cummings about her new book recently. Conversation sped across the biotech, industrial-ag, organic, biodynamic, factory-farm, biopharm, historic and present-day political worlds concerning the manner in which we feed ourselves. We also zeroed in on regional issues regarding this many-headed food-production topic.

In November of 2005, Sonoma County voters rejected Measure M, the Genetically Engineered Organism Nuisance Abatement Ordinance, by almost 17,000 votes. I asked Cummings about this highly contentious political mudfight. She feels most of the negativity came from “the divisiveness of the campaign from [the bio-ag] industry. People who wanted to ensure the quality of seeds in Sonoma County were not responsible for this divisiveness.”

From a strategic perspective, Cummings notes, “Industry has been so successful at manipulating public opinion that we don’t know the difference between true and false anymore.” Yet even as powerful as the bio-ag business may be, other forces have helped simply by not asking the right questions. “The press,” she insists, “did not do its role [regarding Measure M] in clarifying the differences between private commercial technology and the question of what we need in agriculture, and this keeps coming up with all these new bugs and all these new problems.”

But why would so many Sonoma County family farmers lobby against their own self-interest? Foreign markets, the EU and parts of Asia in particular have flat-out refused to purchase GMO-derived or -tainted products.

“I’ve spent some time in the Midwest,” Cummings says, “there’s this ideal of the heartland. I was really amazed at how firmly conventional farmers feel that they’re participating in a larger system that’s growing food for the world and doing good. And they really, really believe that they’re part of this larger vision of goodness and health and food for the world. Any criticism of what they’re doing is an attack on them.”

Cummings emphasizes that Uncertain Peril is not solely about the genetic engineering of foodstuffs. “I do deconstruct biotechnology, because to me, it’s the best example of what I’m talking about, which is the larger question of the role of technology, particularly commercial technologies, in societies. The overriding single thing we can say about this technology is that we don’t understand how it’s impacting our health and the environment.”

How then are unproven and even demonstrably damaging bio-technologies allowed into the environment in the first place? “Corruption,” Cummings says shortly. “And it’s no longer a quid pro quo. Corruption is having those tentacles so deeply buried that two things happen: nobody sees it, and people just do what they’re expected to do when the time comes. There’s never even a conversation anymore. You can’t follow the interest, because it’s deeply embedded in their psyche, the privatization of everything, including life.”

Plant species go extinct every day. Others crossbreed with GMO plants, thus effectively extinguishing the former strain while a new one emerges, an entirely unadapted artificiality thrust into our natural world.

Meanwhile, in the face of ever more stupefying challenges to planetary life, an organization called the Global Crop Diversity Trust is doing what it can to preserve our plant-food heritage by squirreling away 3 million seed samples from every corner of the world deep inside a nuclear blast-proof doomsday vault 700 miles from the North Pole. But like Claire Hope Cummings, shouldn’t we be asking ourselves why is a doomsday vault even needed?