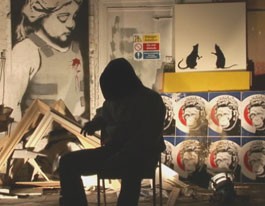 Hooded like a terrorist, hiding in the cavelike shadows of his studio, his face obscured, his voice digitally scrambled, the mysterious English street artist Banksy narrates a twisted tale of fine art in Exit Through the Gift Shop. It’s a tale you might want to drop everything to hear.

The documentary’s actual subject isn’t the elusive graffitist Bansky, “the Scarlet Pimpernel of art,” as one of his journalist fans called him. Instead, Bansky narrates a parable about the career of a boutique owner named Thierry Guetta. Guetta is a friendly, mutton-chopped, French-born Los Angeles boutique owner whose video documentation of a covert scene led, eventually, to Guetta’s own dreadful macking on the same.

The Frenchman was certainly in the right place at the right time. He recorded the bombers, taggers and zappers of the oughties: his own cousin, the pop-mosaic artist “Space Invader,” and Shepard Fairey, artist of the best-known image of President Obama. And there were other late-night crawlers and shinnyiers, painting and postering the vacant zones of L.A., New York, London, New Orleans and Paris.

Thierry and Bansky follow the most recent artists in this scene, whose modern digital printers allow a perfection of line and repetition of image that the pioneering 1980s punk-saboteurs could only dream about. But just as the visuals became more perfect, so did modes of police surveillance.

Banksy’s art has soul as well as easily accessible political content. He takes on well-guarded subjects of oppression, from the British pound note to the Israeli security wall. The best scene in this movie may be the brief interview with a cloth-coated, middle-aged English woman, as humble as a button. A journalist stops her as she leaves the scene of Banksy’s latest art crime: a mutilated red London telephone booth. The half-smiling lady murmurs to the interviewer, “I think he wasn’t very happy with British Telecom.”

“I work in a legal gray area,” Banksy says. Could the Pimpernel have said it any better?

He even takes on Disneyland to make a little public memorial to the tortured at Guantanamo. The piece, quickly discovered, is the peak of the Guetta-Bansky partnership, as Banksy’s ingenuity is documented by a never bolder Guetta. Apprehended, Guetta, also known now as Mr. Brainwash, stands up to the Magic Dictatorship’s interrogators like a brave 1940s movie Gaul baffling the Gestapo.

Is Exit Through the Gift Shop a tale of fine art? The subject here is the story of any and all self-publicists: Nicholas Sparks, Sarah Palin, this week’s yodeler on American Idol—anyone who can shove their egos into the agora.

It figures. Mr. Brainwash’s “art” is used to adorn the collected recordings of that certain mega-diva who has been called (by David Thomson) “an advertisement for advertisement.” What a gulf of distance between that portrait of M &– &– &– &– &– a and a Banksy-decorated railroad viaduct: a poster with the simple, block-lettered words “Another Crap Advert.”

Exit Through the Gift Shop is about anonymous craftsmanship eclipsed by the sun-gun of self-publicity, of lonely late-night vigils and illegal attacks on consensus reality, elbowed aside by hucksterism on a Dali-level scale. Inevitably, hype, pandering and foolishness replaced the artist’s sacred tools of silence, exile and cunning.