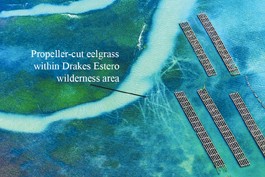 WATERY, GRAVE: The perceived decimation of native eel grass in the estero where Drakes Bay Family Farms raises oysters is among environmentalists’ concerns.

The past few years have seen tremendous back and forth between Drakes Bay Family Farms, a commercial operation within the confines of Point Reyes National Seashore, and environmental groups who want to keep the area a protected wilderness. A new chapter in the saga of fishing rights began this June when Sen. Dianne Feinstein sought to extend Drakes Bay Family Farms’ permit for an additional 10 years.

Feinstein attached a provision to the end of the Department of Interior Environmental Appropriations bill that would extend the Drakes Bay Farms’ lease at Drakes Estero, an estuary feeding into Drakes Bay, from 2011 to 2022.

Feinstein’s action comes on the tail of a recent report from the National Academy of Sciences (NAS), commissioned by Feinstein’s office, claiming that there is insufficient evidence to prove serious environmental harm caused by Drakes Bay Farms.

“The 10-year extension of the Drakes Bay Oyster Company’s lease will preserve 30 jobs at the last remaining oyster farm cannery in California, while making sure that the ecology of the estuary is protected,” Feinstein wrote in an email message issued from her office.

Despite these claims, the Save Drakes Bay Coalition, a collection of North Bay activists and such national advocacy groups as the Sierra Club, are protesting the move by Feinstein. The coalition’s greatest concern regards the possible implications of the rider for national parks across the country. According to Fred Smith, executive director of coalition member group West Marin Environmental Action Committee, the language inserted by Feinstein could have significant impact across the country.

The bill itself does include language that prohibits the permit extension from acting as precedent for any other businesses in national parks besides Point Reyes. Feinstein defends her action by pointing to this provision of the rider.

For Smith, this means very little. “Just because it’s written out doesn’t make it true,” he says. “There’s nothing as far as I can tell that is legally binding in that language.”

Sen. Barbara Boxer has also endorsed the measure, but the Save Drakes Bay Coalition hopes to work with Congresswoman Lynn Woolsey, who has previously questioned the extension of the fishing permit. They are rallying their supporters to urge the congresswoman’s opposition. However, Woolsey’s support currently lies behind Feinstein and Boxer.

“I have always been committed to one simple principle: that I will never support any proposal that would allow oyster harvesting at the cost of harming the local ecosystem,” Woolsey wrote in a recent email to the Bohemian. “This legislation strikes a careful balance that will protect the beauty of Drakes Estero for years to come.” In the House vote, Woolsey supported the bill.

When the 1976 Point Reyes Wilderness Act designated the Drakes Estero area a “potential wilderness area,” Johnson’s Oysters had operated a farm there since 1940 and was given a permit to fish there for an additional 40 years. When Kevin Lunny, a third-generation West Marin rancher, bought the farm in 2005, the land lease still faced expiration in 2012.

Though he was not available for interview before press time, Lunny has long asserted the sustainable practices and environmental responsibility of his farm. Feinstein, too, has stated that the presence of an oyster farm actually improves the local ecosystem by restoring a native oyster population that existed prior—a claim to which Smith and the Save Drakes Bay Coalition argue there is little or no supporting evidence.

These positions on the environmental impact of the farm come after a long and heated history of debate, allegations and shifty science.A 2008 report conducted by the National Park Service claimed that oyster feces cause a buildup of harmful sediment, which in turn threaten the harbor seal population. That report has been much maligned for using faulty data and poor science. The recent NAS report stated the Park Service greatly overestimated the oyster farm’s effect on the seal population. However, nothing is entirely conclusive. The NAS will continue to carry out investigations on the effect of the farm this fall, and the Marine Mammal Commission will conduct its own independent review on the seal population.

The Environmental Appropriations bill also includes a 33 percent budget increase for the Environmental Protection Agency. For any environmentally concerned congressperson, that’s a hard bill to knock down.

Other than the actual environmental impact of the farm or the potential benefit of the larger bill, Smith sees Feinstein’s actions as simply bad policy.

“Considering that American support for the Wilderness Act is really broad-based across the country, I don’t believe this bill would pass as a standalone bill,” he says. “That they’re using a rider to bypass public process, that’s my key concern.”