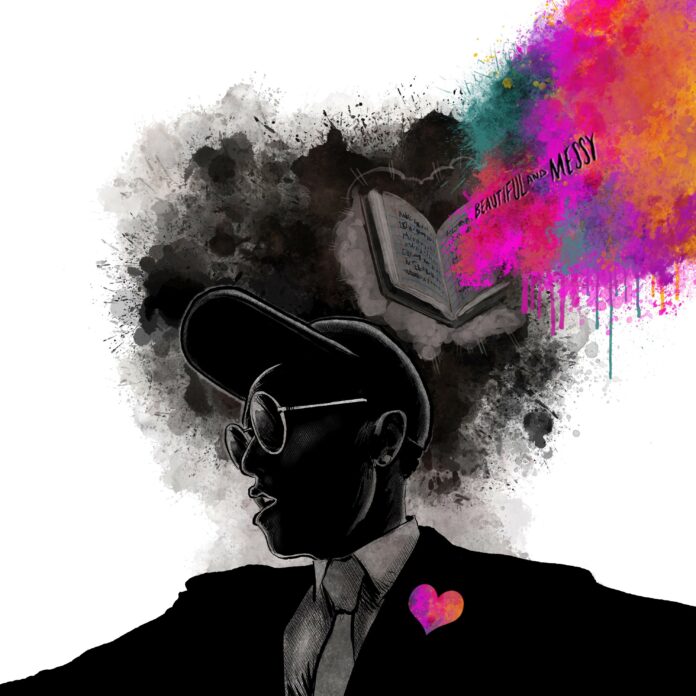 It’s been a roller coaster of a year for Sonoma County educator and hip-hop artist Kayatta.

“The last few months have been life-changing,” she says. “Life has been different than what I’m accustomed to.”

Originally from Oakland, Kayatta has lived in Sonoma County for several years. Last summer, Bohemian and Pacific Sun readers awarded Kayatta the NorBay for “Best Hip-Hop Artist” in the North Bay, and soon after Creative Sonoma awarded her an arts grant to help produce her full-length, debut album.

The album was originally scheduled to come out in March of 2020, but Kayatta faced early setbacks when she lost material in last year’s Guerneville flooding, and again more recently with the statewide, Covid-19 shelter-in-place that took effect in March.

Undaunted, Kayatta spent the last two months finishing the record remotely with her producing partner Shinobi-1, and she is ready to release her debut, Beautiful and Messy, with a live online release-party on June 19; a date which also marks Juneteenth, the oldest nationally-celebrated remembrance of the ending of slavery in the United States.

“I don’t know if the universe was aligning everything up, but with the Black Lives Matter movement happening, I get to drop my album on this day,” she says.

While Kayatta wrote the majority of the album’s 11 tracks well before the pandemic and the recent protests against police brutality, her socially-conscious lyrics are just as relevant today as they were when she wrote them.

Musically, the album recalls the beats and melodies groups such as A Tribe Called Quest and female rap artists such as Ms. Lauryn Hill pioneered in the ’90s, and Kayatta also includes some spoken word tracks, adding a poetic aesthetic to the album.

The album’s title, Beautiful and Messy, is inspired by Kayatta’s recent life experiences and a panel discussion she heard on the topic of God’s plans.

“I didn’t even know if I wanted to be there,” she says, of the discussion. “But this lady on the panel started talking about our relationships in life, and she said, ‘God never intended for your journey to be smooth, it’s going to have some complexities to it.’ She said, ‘It’s going to be beautiful and it’s going to be messy.’ And that sounded like my story.”

“My friends will tell you I’ve been doing music a long time and the whole journey to get here has had so many roadblocks,” Kayatta says. “But when you finally get to the core of everything, that’s the beautiful part.”

Beautiful and Messy not only describes Kayatta’s journey, it also perfectly encapsulates many of the feelings surrounding the recent nation-wide protests and renewed Black Lives Matter movement.

“With the Black Lives Matter movement, racism is on full display and it’s ugly,” Kayatta says. “But the beauty is our youth who are up and on the front lines. People are actually listening and they want to educate themselves to really impact change. This is the first time I’ve ever felt hopeful about it, this is the first time I’ve felt that maybe something will change.”

Beautiful and Messy gets its official Internet release on June 19, when Kayatta hosts a live event on her Facebook and Instagram pages. In addition to playing the album, she will give backstories to the songs, discuss June 19’s historical significance and talk about how today’s current events reflect the ongoing progress towards equality.

“This is the first time I’ve had my white friends hit me up and really want to have conversations or say, ‘How are you doing or what can I do?” she says. “The answer is, always educate yourself, but also be willing to have uncomfortable conversations. What happens a lot of times is we just dip out when conversations get heavy, and I do it too as a Black woman, but I think if we find a tolerance to remain present in those conversations, there’s so much value in that.”

“Being a Black person in America, nobody will understand that unless they’re Black; period,” she says. “If you listen to music and you listen to the music that we’ve created over the years, we’ve been saying the same story over and over again, just in different ways. Music is a great vehicle to tell our stories.”

Kayatta hosts the album-release for ‘Beautiful and Messy’ online Friday, June 19, at 8pm on her Facebook and Instagram.