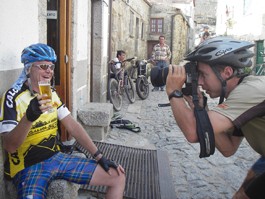 The call came in late August, as I prepared for a five-week solo bicycle journey from Portugal to Spain. It seemed that the Portuguese Tourism Board demanded my assistance for an upcoming exploratory expedition through the eastern highlands of this small Mediterranean country. The plan: to travel with a dozen other journalists and cyclists for eight dangerous days through 12 historic villages and along 335 miles of farm roads, foot trails and cobbled Roman highways; to brave a wilderness shadowed by remnants of the Medieval, guarded in its many corners by castles. Our mission: to lift the veil of the centuries from this little-known nation and reveal its inner secrets to the wider world. Clearly, I was needed.

The expedition included a very remarkable feature in the form of Gary Fisher, inventor of the mountain bike and a Marin County native, who was riding along. Eager to meet the king of the trail and to be a part of this high-stakes assignment, I told the Board that I would gladly be waiting at the appointed meeting place, the first-rate Hotel Principe Beira in Fundao, eastern Portugal, on Sept. 3. I flew to Lisbon and from there cycled for a week north and east, over the Rio Tejo valley and up into the high Serra Estrella, where I spent several days riding in circles and swearing at the yapping dogs that shadowed me every foot of the way.

On the appointed day, I descended from the mountains into Fundao and to the hotel, where I waited in the lobby, chuckling over Twain’s Innocents Abroad for an hour before a van marked A2Z Adventures pulled up out front and disgorged a jetlagged gaggle of men and women who would become my friends and partners in the next week’s journey. We introduced ourselves and chatted at the hotel bar, a tall dapperly dressed gentleman named Gary slyly among us, as though he weren’t a superstar.

We checked into our rooms and then went by van to the town tourism agency for a brief conference with the local press. Our guides, A2Z owners Pedro Carvalho and Pedro Pedrosa, and a suited rep from the federal tourism board explained to us and the local newspaperwoman the trials of our challenge: a rough, bumpy week on the “Grande Rota das Aldeias Historicas”—the Grand Route of Historic Villages.

The trail, first routed in 2000, would take us in a counterclockwise circle from Castelo Novo around the Serra Estrella and back again to the starting point in eight days. We would see largely unvisited country, some nearly desert, some green and lush, and all of it brimming with historical antecedents of the Moors and Spaniards, as well as invincible castles and hungry packs of dogs.

“We’re trying to bring tourists to this part of the country, which really needs the economic boost,” said Carvalho, translating for the Tourism Board agent. “The beaches get an unfair share of the visitors.”

Matthew Kadey, journalist and photographer from Toronto, asked if there was any concern about spoiling the region by taking this fabulous free trip and then writing home about it. What’s Kadey trying to do, I thought, ruin our vacation? But then I glanced over at Fisher. He kept a heroic silence. I followed suit.

“We’ve thought about it,” said Pedrosa, a lean and muscular native of Leiria. “That’s why we’re using the bicycle. It’s inoffensive, quiet and takes people away again with almost no impact to the land.” Our team was fine with that.

Our perilous journey began bright and early at 10am the next morning, after native rations of fresh fruit, omelettes, sausage, granola, artisan cheeses, ham, warm bread, pastries, coffee and milk. Our destination was Monsanto, a Medieval village 38 miles to the west, set high on a hill with a castle on top. In our first kilometer, we had a casualty when Pedro Trindade, a Brazilian bike-shop owner, wiped out and skinned his knee. A pack of dark-eyed, scartchy-backed mongrels circled watchfully in the brush as Carvalho stopped the bleeding; his wounds were not quite fatal.

Under the hot, blue skies, I rode beside Fisher and chatted. A calm and meditative man, he said that now that he had conquered the world, it was his goal as a businessman to push the bicycle as a means of primary transportation, not just a toy for shredding trails.

“The mountain bike has become ironic,” he said with mild irritation. “First, it’s an SUV ornament. Second, our president loves his. This was not our original idea.”

I asked him how it felt to see his own name on every bike, bottle, shirt, sock, dog, child, tree and rock in sight, and he shrugged. “It’s like a third person now.”

I was crawling along on a skinny-tired, inadequate bike with no suspension, and Fisher soon tore ahead. Then Shannon Mominee of Dirt Rag magazine blasted past and dusted me, as did Alexandre Silva of BIKE magazine, Renata Falzoni, a television producer from Brazil, and Kadey and several assistant guides. It’s a lonely road the traveler wends when he has no magazine credentials and didn’t therefore receive a brand-new, smoking-hot mountain bike to review for the gear department.

The road meandered past scattered cork trees, olives, figs and groves of eucalyptus. We saw not a vehicle all day—just mean, mangy mutts that ran circles around us. Monsanto was splendid, a tiny stone village of miniature homes, huts and mules, plus a few old folks who peered out their doorways as our team of Spandexed aliens zipped about the streets and performed wheelies at the castle gate.

Day two was a 55-mile northward push to Sortelha with over 6,000 feet of climbing. Our guides drove along in the van with our luggage and met us at appointed spots along the way to feed us cookies and make sure no one got lost. After all, if there is one thing a team of adventurers does not wish to face, it’s misadventure. Yet one member of our expedition vanished that day: Gary Fisher. He did not show up at the village, and we eventually all went to the hotel without him while our guides went searching.

We checked in, showered, had drinks in the parlor, and at 8 o’clock, sat down to eat. We feasted on mounds of potatoes and venison, beef and soup, water and wine, and speculated upon where Gary might be and if he was cold and whether he could scrounge up something to eat and keep it from the animals. We wished him well, and were happy. We were enjoying dessert when the search party arrived with Gary. He’d had a flat tire and no water, but managed to find a phone and was now one big smile in a blazing white jumpsuit and bandana.

Each day grew longer and more difficult, and the team began to tire. Our Brazilian videographers showed up later and later each night as they skirmished for winning footage of each other barreling along the dusty roads with castles in the background. We could never get enough water; we were endlessly dehydrated, guzzling as fast as we could at each village fountain and sweating it all out again in the next few miles. I lost the route on day four, a scorcher, and wound up in a dusty, windswept desert ghost town on the Spanish border. My rations had expired and I had no water, but I found free Internet access at the town library. I Google-Earthed my approximate coordinates and managed to escape that blistering widlerness with the kind help of those good folks in Silicon Valley. A traveler must travel.

The next day, we journeyed along abandoned dirt roads in the Douro River region, a dry land saturated with a bittersweet beauty. Jumbled boulder piles lay strewn over the low hills, while long and winding stone walls snaked through centuries-old orchards of stubby olives and figs. At frequent intervals, we came through crumbling villages where the citizens sat in the square and waited for something to happen in a country beaten silent by the ever-present Portuguese sun.

We headed south into the Serra Estrella, and the land grew markedly greener with the elevation. It was a refreshing change of scenery, but the exhausting week had reduced us to a ragged troop of sunburns and bloody bandages, always thirsty, breathing dust, in fear of dogs and tiring by the day. Press junkets aren’t always just fresh cookies and prime beef. A glance at several passages from my journal aptly illustrates our heightening despair:

Sept. 6: The team grows weary. Have traveled 45 miles today, under a blistering sun and through swarms of yapping mutts. A wonder no one has been eaten. Water scarce. All parties report persistent fatigue and withering strength. Team Brazil arrived at hotel after 9pm. No festivities after dinner.

Sept. 7: Paolo took a dangerous header over his handlebars after hitting a rock. Ricardo sprained his ankle in a crash and has been left for the dogs. Hope all but lost.

Sept. 8: Cafe severely overcharged us at lunch. Spirits at rock bottom. The van was out of cookies when I arrived at the rest stop, but at last—the hotel! A warm contemporary space that “Deluxe Living Magazine” hails as being “a perfect balance of the rustic and regal.”

In spite of such odds, our valiant A2Z guides rescued all stragglers, and we miraculously reached Fundao with a full head count. Only six of the group, however, managed the last day’s ride, a 60-mile ordeal in the Serra de Acor under gloomy gray skies and over nearly endless ridges and valleys, but thoughts of the multi-star hotel in Fundao beckoned us bravely forward, and by midafternoon, the journey was over. Bikes were disassembled, bags packed, e-mail addresses exchanged.

At our last supper, Gary delivered a toast to the courage of the team, commending spirits that never faltered and the journey’s accomplishments. We had dissolved a frontier and discovered an alluring Italy-like nation of quaint villages, wild dogs, grapevines and espresso machines certain to provide reams of glowing magazine copy and full minutes of TV airtime.

But at least one person at the table was crying inside: me. My own trip would go another three weeks, 2,000 kilometers farther. I would cycle up the length of Portugal, across many great rivers and into the green highlands of northern Spain. I had a whole world to ride but no one to share it with. Gone would be the grand banquets, the sense of direction, the social breakfasts and the midday beer stops that come with a free, guided press-group bicycle ride. In fact, I reasoned I would never see most of my comrades again, though I could still run into Fisher on the roads of Marin and perhaps stop in at Iron Springs Brewpub or Cafe Gratitude to revisit the days when we were heroes and conquered a wilderness together.

Or perhaps we never will. But darn it, Gary, we’ll always have Portugal.