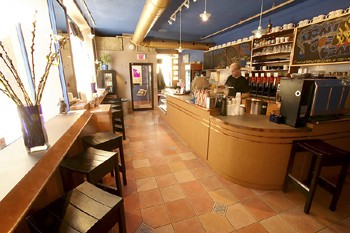 Confessions of a Java Jockey

Confessions of a Java Jockey

A day in the life of a barista

Ol’ Spitfire is acting up again. During its 6am reassembly, the espresso machine begins to make ungodly clanking noises before suddenly spewing espresso grinds through its basket straight at my eyes. It’s a little temperamental in the mornings. Screaming maniacally over in the corner, the other caffeine-producing monster, Curtis the Urn, shoots steam three feet into the air. Curtis spurts out six gallons of coffee at a time, which we usually sell before our shop has even been open for a half-hour.

I don’t even need to drink coffee anymore; the steam from our urn holds enough caffeine to make me buggy-eyed. Of course, that doesn’t stop me from slammin’ the espresso.

As is the case every morning, we grind 12 pounds of coffee (iced, decaf, French roast and house coffee) for Curtis to brew. We arrange the pastries artistically, fill six thermoses with half-and-half (I’ve developed a hatred for the smell of rich dairy products) and set up the chairs out front. Now, with 10 minutes to kill before opening, we sit outside with an espresso and a cigarette, and discuss recent marriages of old high school friends.

Often, the first customer of the day is already waiting outside in the dark. If it’s someone we like, we’ll go back inside to open the doors; if not, they have to wait until we’ve finished our smoke.

Today, our first customer is Big Gay Mike, and we rush to open the door. Big Gay Mike comes in once before his morning workout and once afterwards for a nonfat café au lait and a plain bagel with cream cheese. His dog, Ed, gets half of the bagel. Big Gay Mike has a T-shirt with Ed’s picture on it, and several large portraits of the pooch adorn the walls of his home.

Big Gay Mike is our absolute favorite customer because he always listens to our dating woes and offers tips on which expensive restaurants we should get our dates to take us to. He also likes to bake, and he often brings us decadent brownies and peanut butter concoctions.

As Big Gay Mike and Ed are leaving, Mr. Cappuccino Man comes in for a capp in his own mug. He always gives us his newspaper when he’s finished so that we can do the crossword. Yesterday, Mr. Cappuccino Man, a portrait photographer, brought Laura a poster-sized photograph that he took of her last week for her birthday.

I went with Laura to Mr. Cappuccino Man’s house for the photo shoot because we don’t really trust our customers. All kinds of coffee drinkers come into the shop, from briefcase-toting yuppies to homeless heroin addicts who use our bathroom as a quiet place to shoot up. But whatever their position in life, a large majority of our regular customers are weird.

We’ve developed certain coping strategies, the main one being, “Don’t mess with people’s coffee.” Customers can turn ugly as pit bulls guarding a bone if they fear something’s different about their usual caffeinated beverage.

At 7:30am, Construction Ken and his little daughter come in for a 20-ounce mocha with whip and a small hot chocolate. Construction Ken says he’ll bring us abalone pearls for our navel piercings the next time he dives. We’ve heard it all before, although Construction Ken is the cutest of all the customers who hit on us.

Actually, the constant attention–romantic and otherwise–can get tedious. A co-worker’s pet peeve is that she’s “a prisoner behind the counter! I’m not a freakin’ bartender, you know!” Oh, but you are, my dear. Our bar’s just more socially acceptable than the kind where patrons wind up face down on the floor at closing time.

Cowboy Dave is our next customer, and today he’s feeling spry. He does a tap dance for me as I hand him his small house coffee. Around 9am, the pack begins to trickle in. We’ve got a used-car salesman, his girlfriend, a social worker, a chef and a few unemployed construction workers who hang around from eight to 10 hours a day, drinking French roast and smoking cigarettes. They get refills once an hour.

My co-worker Saul compares our coffee to “a crackhead in a prom dress, because it looks classy and glamorous, but when you take off the prom dress, you see that it’s just crack.”

Sometimes we get an in-your-face look at more serious addictions; it’s not much fun, for instance, to have to clean up used hypodermic needles from the bathroom floor.

That said, working in a coffee shop is the best kind of service-industry job. Customers are nicer to baristas than to other people who wait on them because we’re like drug dealers; we give them what they need and make them feel good, so they’re grateful. Plus, we stand on a raised platform so we look down on all of the sleepy customers. It’s a position of power.

During slow times, we java jockeys do a lot of caffeine-induced philosophizing–and no small amount of gossiping. Who is Saul trying to sleep with this week and how old is she? But mostly, we talk about the customers.

Our shop collects scads of loons. We’ve dubbed one nut the Babbler, for obvious reasons. He’s a contractor who was going to install new outdoor seating, and he thought this made him our new best friend. After the Babbler had been hanging around eight hours a day for about two weeks, Saul was the only person who’d respond to his constant conversational overtures. The rest of us would stare vaguely off into the distance, which didn’t keep him completely at bay, but at least kept him from becoming overexcited.

Today, Saul took his break and went out front to skateboard. That’s when the day took a strange turn. While doing a trick, Saul accidentally broke his board in half. Upon seeing the board snap, the Babbler began to jump up and down, excited to try a new sort of glue. He pulled out a multitool to remove the wheels. Saul took over the job because the Babbler wasn’t having much luck dismantling the wheels. But the tool suddenly slipped out of Saul’s hand, and the Babbler lunged forward, screaming, “Nooooooo!”

Then he grabbed Saul and tried to stab him with the tool. All of the regulars and employees (we usually hang around out front on our days off) stood up and restrained the Babbler while he screamed threats at Saul. After that, the Babbler was expelled from the shop.

We like to use our right to refuse service, though we usually save the job of giving the bum’s rush to unruly customers for Laura because it’s her favorite part about being assistant manager.

Yesterday, two of our most aggressive customers, Beavis and Butt-Head, drew swastikas on the foreheads of all of the Arab-looking meditation yogis tacked up on our bulletin board. Brandon erased the swastikas, leaving the poor yogis with permanently scrubbed white foreheads.

When the mullet-headed duo come in for their caramel mochas this morning, Brandon and I are working the counter. Butt-Head swaggers up to the register and orders, Beavis sniggering away at his shoulder. I look down from my position of power and say, “OK, but you have to promise not to draw any more swastikas on our yogis.”

Butt-Head stars at me and sputters, “What? What! Who said this? I’ll sue you for slander, you bitch! You can’t accuse me of this in front of all these people! I’ll have my lawyer sue you personally for all you’re worth!”

For my $7 an hour, sue away, buddy. I reply, “Two of my co-workers saw you drawing swastikas on our bulletin board yesterday. I don’t find that cool, and I’d like to ask you to refrain from doing that in the future.”

After listening to Butt-Head berate me for a few more minutes, Brandon repeats what had happened yesterday. At this, Butt-Head becomes even more aggressive and demands that Brandon step outside and settle the dispute with his fists. Butt-Head weighs over 200 pounds and has a prior grudge against Brandon for “disrespectin’ his woman” (direct quote) while serving her a vanilla latte a few months back.

Hearing Butt-Head threaten Brandon with fisticuffs, I get angry and tell the cretin to leave the store immediately. He finally takes off, spewing a volley of curses over his shoulder on the way out the door and concluding with this insult, directed triumphantly at me: “You’re so confused, you don’t even know what color your hair is!” (Within the last month, my hair has gone from poppy to vermilion to Atlantic blue.)

The next customer in line comes up to order his 20-ounce coffee. This guy, another big construction-worker type with a few teeth missing, leans over confidentially and whispers, “I think your hair’s real pretty.”

Big Gay Mike’s response to the confrontation is more insightful: “Why are such big, strong men ordering such wussy drinks?”

I later ask Brandon how he was able to simply stand by Ol’ Spitfire and take all that profanity in silence, and he replies, “I just looked at him and sort of took satisfaction in knowing how much smarter than him I am.”

Ah, another fulfilling day at the shop. During the afternoon slump, we’ll face off with each other and chug espresso shots until we get sick, then we’ll race around cleaning and organizing, like the caffeine addicts we truly are.