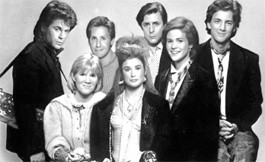 We use the same vehicle, share a joint bank account, give each other the same colds. When we go out, I drink half his beer and he could care less. Our married life is fully integrated–almost. Forget kids, pets, a house; it’s music. You may be in my heart, dear husband, but keep your hands off my CDs.

Up until now, we’ve kept our CDs separate. There are very few things in our lives we have complete control over, and I find solace in knowing exactly where all of my CDs are and that their spines are flush with the edge of the shelf and their titles are all facing the same direction.

But both of our CD collections have grown too large and unwieldy to store in different areas. So Mr. Bir Toujour and I are going to bring them together, and I am having combination anxiety.

As a former library employee, I have a deep affinity for the alphabet–the indisputability of its sequence, the way one letter flows to another so naturally. I shelve my CDs just as one would shelve novels in a library, grouping albums by artist, then arranging one artist’s multiple albums chronologically by release date.

Mr. Bir Toujour also organizes albums by letter, but not the right way. He’ll put an Ian McCullough CD with the I‘s not the M‘s. In an especially distracted moment, he might even put Ian McCullough with Echo and the Bunnymen. And he lumps each letter together generically, so that you might see a random sequence like this: Pell Mell, Pale Saints, Polvo, Pell Mell, Pelican, Pale Saints. What cruelty, to separate Pale Saints and Pell Mell from their album kin!

It’s the miserly part of me that blanches at the thought of blending my CDs with Mr. Bir Toujour’s. I might wear one of his T-shirts every now and then and I will happily spend the money he earns, but I am unhappy to think of my CDs in danger of disorder.

Back when we were first dating, each of us bought a copy of Ride’s excellent three-CD box set. At the time, it made sense, because I wanted my own copy and I had no idea that we would wind up spending the rest of our lives together. And after I moved in, we still each had our own copy. Until one day, when I noticed Mr. Bir Toujour’s was gone. “I sold it back to the record store,” he said. “We don’t need two copies.”

I would argue that anyone’s happiness would double according to the number of Ride box sets they own, but that was not the root of my objection. “What if we get divorced?” I said. “If we split up, I would need my Ride box set to get me through.” Though I neglected to say so, I’d seen St. Elmo’s Fire enough times to vividly remember the scene where Judd Nelson and Ally Sheedy, in the midst of a messy breakup thanks to Andrew McCarthy, fight over who gets to keep the Police album.

I didn’t want that to happen to us. I didn’t want us to split up, either, but I like to think of preparation as a talisman to ward off disasters. Remember which one of us bought that reissue of Pavement’s Wowee Zowie? Terrific–we’ll stay married forever!

A friend I went to school with lived out of his backpack. He fancied himself a vagabond, and though he loved music, the only CD he owned was a battered copy of T Rex’s Tank. That’s not hard to organize at all: “Hey, where’s Tank?” We lost touch, but he and Tank are out there somewhere, perhaps happily settled with the right woman, because in the end, unless you are married to Donald Trump, you are with a person for the person, not his stuff. Even so, I do very much enjoy Mr. Bir Toujour’s music, wrong order and all.

But I’ll still extract Polvo from Pell Mell before adding my Pulp CDs.