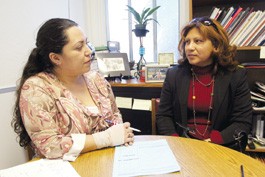 Land of the Fee

The cost of citizenship may soon go up by hundreds of dollars. Will fewer immigrants go legal?

Abdu Christopher Marquez is a soldier. At 21, he’s a private first class with five years to go in a six-year Army National Guard reserve contract. He has a one-year-old son named Isaiah. In a few weeks, Abdu will leave Sacramento for Iraq to join the 143rd Infantry Brigade as a military cop.

Despite the many considerations you’d imagine he’d have right now, he’s got his mom on his mind. He says he’s proud of her. That’s because this year, his mother, Rosabla, is finally taking major steps toward her Application for Naturalization, the N400 classification by the United States Citizenship and Immigration Services (USCIS).

Rosabla Marquez has lived in the United States for more than two decades. She’s put herself through a marriage, a divorce, the birth of four children, five professional changes, the rise and fall of a successful entrepreneurial career and, just last year, the birth of her first grandchild. She did it all without United States citizenship. But Abdu has playfully hassled her to get official papers since he left for boot camp last year.

“I was just pushing her–‘C’mon mom, you can’t just stay like this, you gotta be something, you gotta be somebody,'” he says. “I want her to have the same opportunities I have. Being a citizen is something to be proud of, you know?”

It has other advantages, too. Though some immigrants prefer to remain as noncitizen “permanent residents,” that categorization (aka Green Card status) is akin to having one foot in the country and one foot out. Under Green Card status, immigrants can’t vote as permanent residents and, if taken into custody, don’t have rights to a lawyer, except at their own expense; they also can’t leave the country for more than six months without risk of deportation or detainment. Citizenship is preferable for some, and Abdu believes his mother is ready to take that step.

But what if his mom had to pay almost twice as much for the privilege? She’s waited 20 years, after all, and it’s not required; her Green Card status is 100 percent legal. The fee right now is $330. But what if she had to pay $595? Would he still hassle her to get her citizenship papers then?

“Oh, damn,” he says. “If money wasn’t a problem I would, but probably not.” Rosabla has struggled financially, he says, and it was a big deal for her to be able to afford to apply for citizenship this year. “I’d probably leave her alone about it if it were that much,” he says.

The increased price of citizenship may come sooner rather than later. Last month, the USCIS (not the INS, which ceased to exist on March 1, 2003) proposed a price hike that would raise the cost of some 40 disparate immigration services by an average of $223.

The proposal, according to a Homeland Security fun pack released Feb. 1, is a funding issue. According to the USCIS, an application to adjust status from temporary to permanent resident is way undervalued. It currently costs $180; if the proposal goes through, it’ll cost $1,370. (Application for temporary nonimmigrant status, however, is apparently just right. It currently costs $270. Post-proposal, that fee will remain the same.)

In theory, the proposal has an upside for applicants because it seeks to eliminate some red tape. They would not have to reapply as often, and residents applying to change from, say, temporary status to permanent residency, would no longer have to waste time and money on additional applications for work status and permission to travel. The USCIS is a government-supported but self-sustaining organization. That means all released immigration documents are legally binding and required by federal law, but costs are funded only by service fees. Because of this, the USCIS is putting the price hike to a vote. The comment period began Feb. 1 and lasts until April 2. The “adjusted” fees, if approved, will not become effective until June, at the earliest.

Ali Noorani, executive director of the Massachusetts Immigrant and Refugee Advocacy Coalition, says the real problem is with the USCIS, which he calls a “bureaucracy run amok.” The way he sees it, throwing more money at the problem won’t help. “The spending seems arbitrary to me,” he says. “It seems immigrants will be paying a whole lot for nothing.”

Noorani says more people are waiting much longer to become citizens, even after typically required waiting periods (five years for permanent residents over 18 and three years if the applicant is a legal permanent resident married to and living with a citizen), because the Bush administration has made no investment in the naturalization process.

“The feds are increasing naturalization fees, but making no concrete commitment to improving services,” Noorani says. “If anything, this is just another brick in the wall. Who decides where the money goes?”

USCIS spokesperson Sharon Rummery responds that no one can decide better than the agency itself. “We know where our needs are, so we know what money needs to go where,” she says. The reasoning behind the fee-increase proposal is simple, Rummery says. Since USCIS is funded solely by user fees, “if we want to keep up, we need to raise costs.”

But Angelo Paparelli, an active immigration blogger, California certified specialist in immigration law and former chairman of the Immigration and Nationality Committee, doesn’t believe the USCIS has measured its costs accurately. He says that before the proposal is approved, the USCIS needs to be held accountable at a congressional oversight hearing where it shows proof of cost analyses and funding needs. “Otherwise, it sounds either like an elusory campaign for technological improvement, or a tax on wanting to become a citizen,” Paparelli says. “And isn’t citizenship something we encourage?”

Not necessarily, says Norm Matloff. A computer science professor at UC Davis, Matloff is an outspoken anti-immigration activist who’s particularly concerned with computer companies seeking to hire foreign guest workers. “Most people view illegal immigration as bad simply because it’s illegal,” he says. “I don’t look at it that way.”

Instead, Matloff asserts that immigration has the more or less the same effect, whether it’s legal or not.

“As to the immigrants themselves,” he says, “I would sympathize with them if the increased fees were to force them to stay illegal. However, I do not believe that that would happen; they’ll pay the cost, even if they have to borrow the money.”

Rosabla Marquez has avoided the price hike. But even if the price were a thousand dollars, she says she would find a way to do it, however she could. Her entire family is here, her children were born here and it’s in her best interest to become a citizen, she says. “I want to do it. I really do.”