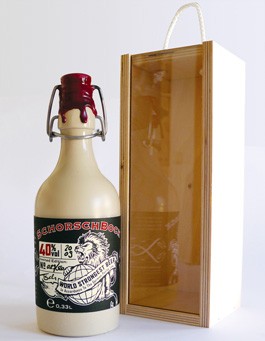 Ice-distilled brews are high in alcohol and entirely illegal. You want one, don't you?

They say beer tastes best between 50 and 60 degrees Fahrenheit, but below freezing, magic can happen. Within these chilly realms, a beer will freeze—but not entirely. While much of the water in the beer will turn to ice, the alcohol will not. It resists freezing (to a point) and, along with all the flavorful goodness that makes beer beer, will remain in liquid form while ice crystals extract themselves from the beer. The result is an amplified version of the starting beverage, higher in alcohol, bigger in taste, and—here in our land of the free—entirely illegal.

According to legend, ice distillation was discovered by accident a century ago in Germany one cold January. Legend says it happened in the city of Kulmbach, Germany, around 1890 when a brewery apprentice accidentally left several barrels of the brewery’s bock beer in the yard for the evening. A deep freeze settled on the country that night, and when the staff arrived the next morning, the brewmaster was livid. His barrels had burst open and inside each was a mass of solid ice. Upon further inspection, he found a thick, supercooled fluid the color of tobacco spit remaining at the center of each barrel. The angry brewer forced his apprentice to drink the juice, imagining it to be a putrid byproduct of a spoiled beer.

But it was not. Rather, apprentice enjoyed his punishment. According to the legend, the entire brewery enjoyed the spoils of the accident, and subsequently during each winter’s coldest days they took advantage of the weather and made an intentional batch of Eisbock.

Today, the trick lives on, and brewers near and far have toyed with beer and low temperatures to produce super-brews several times stronger than the beers they began with. The process, however, is controlled by the federal government’s Alcohol and Tobacco Tax and Trade Bureau (TTB) as a form of distillation, in the same league, so goes the reasoning, as the techniques that produce spirits like brandy and vodka.

Larry Sidor, brewer at Oregon’s Deschutes Brewery, suspects why the prohibition is in place.

“If we started doing this, the distilled spirits folks would go through the roof,” he says.

Ice distillation carries no risk of producing methanol (a poison), just ethanol (our friend), and the alcohol levels produced by the process are not great enough to pose a fire hazard. Such commercial breweries in Europe as Kulmbacher, Eggenberg and Aventinus apply the technique (and they probably wouldn’t if it risked killing anyone) to making a style called the Eisbock, a super-strong ice-distilled lager.

But in the United States, the Feds may bring down the hammer on anyone they suspect is selling ice-distilled beer. In the 1980s, authorities did just that to Sidor at Deschutes, who until then says he had made thousands of barrels of “ice beer” without any suspicion that freezing, concentrating and selling beer might be illegal. Sidor recalls his ice beers going down remarkably smoothly, for, as he notes, the freezing process draws a portion of the tannins and plant particulates out of the beer. Ice beers, he says, can taste “magical.”

Other brewers have dabbled in the craft. More than a decade ago, Lagunitas Brewing Company froze a special seasonal release—the nearly 7 percent alcohol by volume (ABV) Solstice Lagunator—then drained off the beer, and repeated the process twice more. By the third time around, there wasn’t much beer left, recalls brewery founder Tony Magee, but what remained was a beast that scaled out at more than 18 percent ABV.

But that’s nothing. From BrewDog in Fraserburgh, Scotland, comes the Tactical Nuclear Penguin. The beer, made late in 2009 in an extremely small batch of several hundred bottles, began life as an imperial stout—10 percent ABV to start. The stout underwent 18 months of aging before going to the freezer at a local ice cream factory. Here, the beer spent 21 days in solitary at negative 20 degrees Centigrade, and the fluid that came out was 32 percent ABV, touted then as the strongest beer ever made. Then, this January, Schorschbräu, a German brewery that had previously produced a 31 percent ABV beer announced the release of several bottles of a new Eisbock that scaled out at 40 percent ABV.

But is it really beer? Some brewers say not, agreeing with the Feds that concentrated malt beverages should be distinguished as such. Sam Calagione, the founder of Dogfish Head Craft Brewed Ales, says that he thinks ice distillation is “cool,” but added, “We believe the [federal government] is right to not consider distilled anything beer.”

Others, like Brian Hunt of Moonlight Brewing, approve of ice distillation. Hunt has never frozen a beer, but doesn’t see why others shouldn’t. “[Ice distillation] is just another tool for making a higher alcohol beer, with, perhaps, some other flavor changes.”

Imported Eisbocks are readily available. Even the Tactical Nuclear Penguin can be had for the atomic price of about $70 for a 12-ounce bottle. At Wisconsin’s Capital Brewery, Nelson has done his best to imitate the style within the bounds of the law. He adds 100 percent fermentable “candy sugars” that contribute pure alcohol to the beer without adding background noise and complexity.

“We achieve strength,” he says. “We emulate a style, but it’s not the real thing.” Asked whether he’s certain he hasn’t ever applied a bit of subfreezing weather to the beer, Nelson says, “I would never admit to illegal behavior.”

The TTB prohibits the sale of beer “concentrate” if the said concentrate amounts to three-fourths or less of the original volume of the starting beer. Such concentrated beers are legal to make but must be reconstituted with water prior to sale. However, beers concentrated by miniscule amounts—like Icehouse from Miller (rated D+ by tasters at the public forum RateBeer.com) and other similar lagers—are not prohibited.

The fun stuff is illegal, and that makes it all the more fun.

Ice distillation is fun and easy—but we would never recommend doing it at home. So do not crack the cap (to avoid explosion) on a bottle of your favorite strong beer. Do not then place the bottle in the freezer. Do not then wait a day. Do not drain the bottle upside down into a handsome snifter as the beer runs from the ice. Do not enjoy at about 60 degrees Fahrenheit.

Alastair Bland
Previous articleMar. 27: ‘The Life and Times of Rosie the Riveter’ at the Napa Valley Museum
Next articleApr. 1-7: Across the Bridge