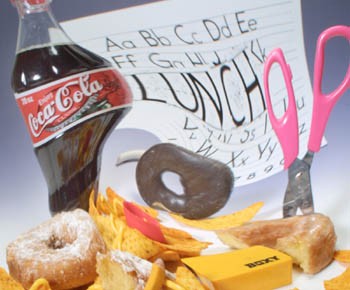 Coke gets schooled, but schools still on Coke

SO, EXECUTIVES at Coca-Cola stuck their clammy corporate finger in the wind and discovered a storm of hostile public opinion blowing their way. Parents and educators had at last woken up to the folly of allowing the unfettered infusion of junk food into the tender, impressionable (and burgeoning) bodies of our youth. By way of response, the soft-drink colossus will no longer demand exclusivity contracts of schools that carry its vending machines. Alas, the damage has already been done and is, I fear, irreversible.

As a substitute teacher in the public schools, I’m here to report on casualties in the Cola Wars from ground zero. I recently moved to Sebastopol after a year of living–and subbing–in San Francisco. High school in the big city is a truly scary world, folks. At first, I used to wonder if I was in the middle of a psych ward or war zone or was some hormone-tweaked hybrid. I considered it a good day if I didn’t have to call for help from the security guards, and often quipped that subs should get hazard pay. In light of the now chronic epidemic of school shootings, that joke’s not funny anymore.

So the other day, I got an education as to the nature of the beast. Or rather, how the beast is biochemically manipulated at feeding time in a most unsavory manner. I was subbing at my neighborhood high school, one where the kids get a 10-minute “nutrition break” at 9:50 in the morning. This is surely an idea that is meant well. It inserts a dash of psychic punctuation between geometry and language arts, affording students the opportunity to discharge restless energy.

After the break, the kids started filing back into class with their trays of “nutrition.” I was expecting maybe apples, carrot sticks, perchance yogurt. Silly me! Overflowing the little paper trays were deep-fried, salt-encrusted, no doubt genetically engineered tortilla chips drowning in a swamp of hunter-orange CheezWhiz. This coronary minefield was savagely chewed and washed down with the definitive nutritional anti-Christ, Coca-Cola. People, if this is nutrition, then I’m George Orwell beholding the Peacekeeper missile of the American teenage diet.

Or maybe this dietary one-two punch can be more accurately compared to the military’s cursed bird of prey, the Osprey. As soon as the ersatz fuel is injected into the youngster’s bloodstream, he is launched with the force and intensity of a rocket. The surge dissipates rapidly, sending him sputtering along the horizon until he plummets back to Classroom Earth in the inevitable crash-and-burn landing.

I used to wonder why so many kids were nodding out over their desks like junkies. Now I know. Every one of them is coming down off a refined-carbohydrate rush–after an hour or so of ricocheting around the classroom like the contents of an old-fashioned pinball machine. I worry about these kids, their vitamin deficiencies, obesity, blood sugar levels, and attention spans.

I WORRY ABOUT America, for in their junk-food addled brains lies our future. Oh, we can blame parents for not educating their children’s palates as to the joys of broccoli and soymilk. Or we can blame our legislators for allowing then President Reagan to declare ketchup a vegetable, thus opening the door to all manner of nutritional larceny. And we should certainly blame ourselves for Proposition 13, which left the schools little choice but to sell corporations safe passage into the bodies and minds of our children–in exchange for book money.

President Bush can worry all he wants about North Korea. But don’t think a missile defense system is going to save us. It’s too late. The River Coke still flows untrammeled through the hallways of our schools, with or without an exclusivity contract.

I have seen the enemy of America’s future, and it is carbonating our intestines and congealing on our plates.

This is the first in a two-part series on soda pop and society. Next week: Britney Spears and Bob Dole take the Pepsi challenge.