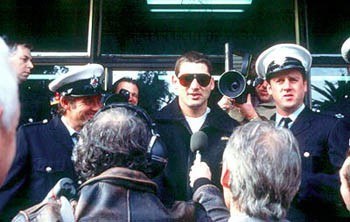 Lend Me Your Ears

CHOPPER Read earned his nickname for an act of self-directed mutilation. One day, he persuaded a fellow inmate to slash the tops of his (Read’s) ears off to demonstrate to the authorities that he was sick enough to be transferred to the psycho ward. Seems that life in the general prison population had become too dangerous for him.

Director Andrew Dominik’s Chopper–the first adults-only No. 1 box-office hit in Australian history–shows us Read’s double-Van Gogh moment in gory detail. The film then follows the slightly less disgusting latter half of Read’s career after his release from prison in the 1980s.

The outside world also proves hazardous to Read: he has a barbed relationship with both his father and his prostitute girlfriend. Eventually, a shooting outside a nightclub in the early hours of the morning brings him back to prison as well as national fame.

Thanks to the fierce but ingratiating acting of Eric Bana, Chopper is, on one level, a well-told sick joke. Read, who went on to write nine books, could be described as a creation of the media, for whom he loved to grandstand. There’s evidence that Read was bright, or at least bright enough to get himself into trouble. And he seemed to be well-mannered under the usual circumstances until the switch got flipped.

As Bana plays him, Read is a man dismayed by his own violence, with a pitying streak for the people he hurts. Gangster films are full of swaggerers, and it’s uncommon to see the life of that more typical type of violent man–the kind who doesn’t know what’s going to come out of the bottle until it’s too late to put it back.

If his story seems cloudy, that’s apt, since the various lies that help keep Read out of jail are persuasive enough that he believes them himself. This movie–inevitably–has been accused of glorifying violence; and there’s a certain class of viewer who’ll take it as such. Indeed, director Dominik enjoys the material, playing with it, goosing the film speed during a coke-snorting scene. In treating various approaches to the killing of a minor gunman named Sammy the Turk, one version is recited in rhymed couplets.

Chopper could have been slick, but thoughtfulness steals into it. Consider the sympathetic glimpses of the prison authorities, who turn pale and sick when they see the violence that Read precipitates. Unlike most movies about natural-born killers, Chopper successfully has it both ways. It shows us a steel-toothed antihero who was cold-blooded, sardonic, and untouched by pain. It also shows us an unenviable, lamentable sick man turned bestselling author, who, as he gloats, can’t spell. (Bana’s Read repeats the boast about being a bestselling illiterate one too many times, so it gets on your nerves. This isn’t just a movie for the Chopper Fan Club.)

Dominik sensibly leaves the question open about what it is about human wrecks like Chopper Read that’s so fascinating. Few of us are killers, but a lot of us are con men, with a dirty, secret envy for a murderer’s one-level method for dealing with the aggravations of the world.