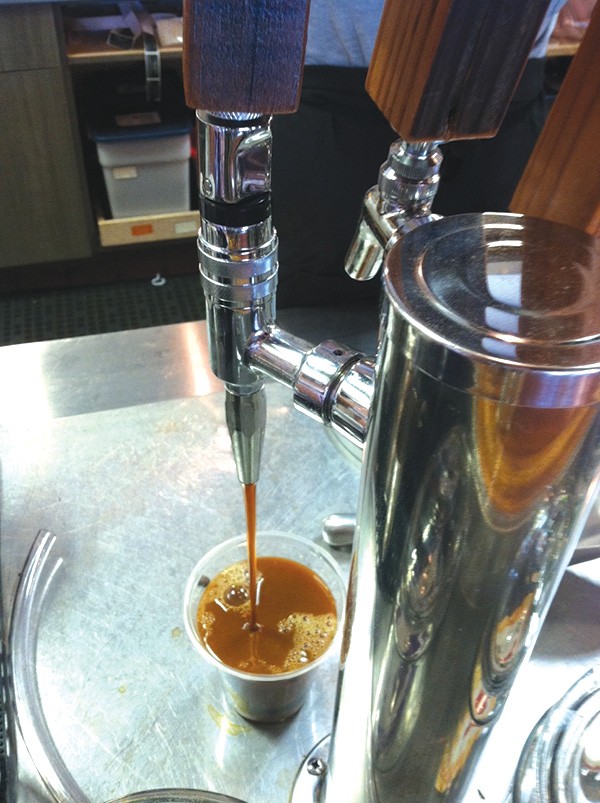 Wine on tap? Old news. But how about coffee in a keg?

Taylor Maid Farms unveiled this innovation in caffeine delivery last month. The cold coffee pours and looks like a pint of Guinness, frothy head and all. Just like Guinness and a growing number of craft brews, the coffee, in three- and five-gallon steel barrels, is dosed with nitrogen. As in beer, adding nitro to the coffee makes for a creamier, more supple beverage. (But unlike nitrogenated beer, Taylor Maid’s nitro coffee has no carbonation, but maybe that would be cool: coffee soda).

Tayor Maid general manager Rob Daly is a fan of the beloved Dublin stout and had it in mind when the coffee was developed. It’s a dark roast that’s cold-brewed for 14 hours. It’s strong stuff that makes for a silky iced coffee and it’s beautiful to watch the ebony liquid pour out of the stainless steel tap.

There are a few other coffee makers that offer it on tap, but Daly says Taylor Maid is the first to go with the dark roast, stout-like coffee. Right now, it’s only available at Taylor Maid’s Sebastopol and San Rafael locations, but look for it in restaurants soon. Daly says the company is also exploring a line of canned coffee on nitro with one of those little marbles inside, just like Guinness in a can.