.In the Kitchen with Michele Anna Jordan 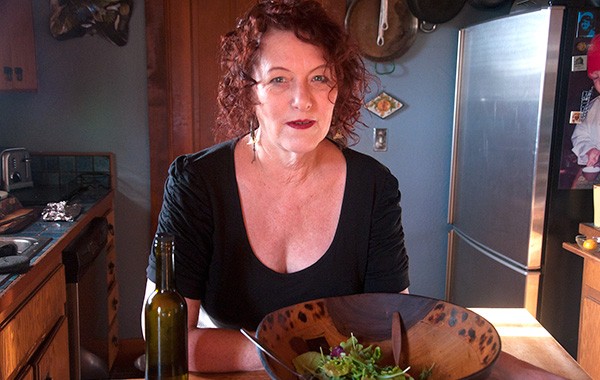 ‘You want to learn how to make a salad? I’ll teach you how to make a salad,” says Michele Anna Jordan, moving quickly through the modest kitchen in her Sebastopol home. Placing a wooden bowl already filled with mixed greens in front of her, she reaches with her other hand for a two-gallon jar to her left.

“The first thing you do when you make a salad is you put salt on it. ‘Insalata’ means that which is salted,” she says.

Her hand reaches into the giant salt jar and she waves it over the bowl in concise circles, raining down tiny white crystals of flavor.

“Then you put on some really good olive oil,” she continues. “You’re kind of generous with this.” More circling; Jordan is indeed generous. “Then you add a little bit of acid, and for this you can squeeze a lemon on. And that’s it, that’s your daily salad.” Jordan smiles, red curls spilling over the frames of her glasses. “If you want to get really fancy, you can add some peppercorns.”

For Michele Anna Jordan, this isn’t just a salad; it’s a story told through shared experience. And it’s a story she’s been telling since she was seven. This year, the former chef and author of more than 20 books is looking back and telling some of her favorite stories once again, rereleasing four currently out-of-print books from her Good Cook’s Book series. Each title is infused with new recipes, new narratives and full-color celebrations of tomatoes, mustard, oil and vinegar, and salt and pepper.

Jordan was born and raised in Vallejo. “I was born a good eater; my mother was not a good cook,” she says. From an early age, Jordan exhibited a sophisticated palate, one that allowed her to identify watermelons’ peak ripeness at age four and propelled her to order her steak rare before she was in high school. By seven years old, Jordan was throwing dinner parties and recreating dishes by taste alone.

“The hardest thing was getting my mother to get the ingredients I wanted,” she laughs.

Self-taught in the kitchen, Jordan moved to Sonoma County full-time in 1972, where she attended Sonoma State University for liberal studies, as well as French, Russian and English literature. “I just cooked. I had dinner parties for everybody in college,” she says.

Forty years ago, Sonoma County was a very different place. “There was no food scene, but there was a farm scene,” she says. “I used to go out to buy salmon in Bodega Bay. There was Miller’s drive-in dairy in Petaluma. It was an actual drive-in and they had raw milk in glass bottles. There was Sonoma Cheese Factory.”

Jordan was soon working in restaurants, learning tricks of the trade on the job and refining her palate. A decade later, she was running professional kitchens, even earning “Outstanding Sonoma County Chef” from the Sonoma County Art Awards in 1989.

WILL WRITE FOR FOOD

As with cooking, Jordan began writing at a young age, always with an eye to journalism. Yet it wasn’t until she was running Brass Ass Pizza in Cotati in the 1980s that she found an opportunity to write. Bruce Robinson, then an editor at two local papers and now the news director at KRCB where Jordan has long hosted Mouthful, her James Beard–nominated talk show covering food, wine and farming, approached her with an offer.

“He said, ‘I’m looking for a food columnist, why don’t you write for us?’ And he didn’t know me,” explains Jordan. “So I had this three-month anxiety attack, and he called back and said, ‘Are you ever going to write that column?’ So I did, and I never stopped.”

Robinson remembers that Jordan was willing to work for free, which was what he could afford to pay her. “What she turned in was great,” he says. “She’s a very effective and enthusiastic advocate for the local food scene. I think she has, in her own substantial way, contributed to the perception of Sonoma County as an attraction.”

In 1988, Jordan met an editor at Aris Books and sold him a proposal for A Cook’s Tour of Sonoma, released in 1990. The book was praised for its community focus on Sonoma County at a time when the North Bay was just beginning to flirt with culinary renown. Jordan is perhaps best known for her writing in the Press Democrat, where she has maintained up to four food columns and blogs continuously since 1997. She says she really blossomed as a writer in the early 1990s while freelancing at the Sonoma County Independent, an earlier incarnation of the Bohemian, and the books started coming very quickly.

“I think she’s highy underappreciated,” says Lucas Martin, chef and co-owner of Sebastopol’s K&L Bistro. “She’s definitely one of the leading voices for farm-to-table. She has a good sensibility about how she reviews and critiques, with an open mind and equal temperment. She knows there is no wrong or right way about food.”

“I’ve been a friend and most of all an avid reader of Michele’s work for more than 25 years,” says Ash, himself a venerable figure in Sonoma County cuisine. “She has the unique ability to take even simple subjects like salt or mustard and help us all understand their history and importance in our culinary lives.”

Empowering readers through her narratives, Jordan offer tools in identifying and exploring each individual’s taste.

“Julia Child used to say we learn to cook so we don’t have to rely on recipes,” says Jordan. “A recipe is a way to tell a story to another person; cooking is something else. Cooking is intuition, knowing your ingredients and what to do with them. For me, recipes are translations of that knowledge into a story. They’re like a map, a way to get to your destination, but there’s more than one way to get there.”

We’ve become very precise in the last several decades, she says, and home cooks don’t feel that they make food as good as in restaurants. Nonsense, she says.

“I tell people, to get used to tasting their food, learn the principles of what makes it taste good.”

A MATTER OF TASTE

For Jordan, personal taste compels her writing. She isn’t one to follow trends; in fact, being ahead of the curve is par for the course. In 1999, she released Salt & Pepper, a decade before Mark Bitterman’s Salted supposedly changed the landscape of American cooking. She also explored everyone’s favorite pork product, bacon, back in 2003 with The BLT Cookbook, right around the time folks were discovering the endless enjoyment bacon provides on sweets and savories alike.

For all her acclaim, including a James Beard Award for journalism, her Good Cook’s Books have all gone out of print—and in Jordan’s mind, out of date.

“I’ve changed, and my cooking has changed as well,” she says. “I’m much more confident as a cook, and the pantry available to us all is so much better now. I wanted to bring the books up to date, give them a longer life because they deserve a long life. I feel like they warrant time.”

Jordan is still committed to the farm scene today, though watching Sonoma County transform from sleepy pastureland to a coveted agricultural hub has been a sometimes scary prospect.

“There’s always the expression ‘To kill the goose that lays the golden egg.’ A lot depends on what the [Sonoma] County Board of Supervisors and the Planning Commission do,” she says. “The good side is that we can sell our stuff. Produce from here sells much higher than produce from anywhere else. There is a market for Sonoma County. At the same time, the wrong people have money.”

Jordan points to instances like the recent lawsuit filed against the Sonoma Compost Company in Petaluma by several of the business’ neighbors in an attempt to shut it down, and proposals for mammoth winery “event centers.”

“People move up here because they want what they think is this idealized Sonoma lifestyle and then they get pissed off because it smells like cow shit,” Jordan says. “It’s like, you bought a house next to a farm—sometimes they smell. There’s always been that tension. You want to preserve the best of Sonoma County because it’s such an amazing place—the fertility, the versatility, the microclimates,” she says.

Jordan is hopeful that preservation efforts will prevail. She cites the recent developments at Middleton Farm in Healdsburg. The farm’s matriarch of many years, Nancy Skall, passed way in January, and there was a question of what would happen to the land. Last month, the farm sold to Anne and Monty Woods of San Francisco. So far, they are saying that they want to keep it open and running under the same name.

Looking ahead to the future of food, Jordan sees good things brewing.

“Cider is coming on strong, and sour beer. Sour beer is going to be huge. It’s refreshing, its tart, the acidity really connects with food,” she says. “And people are going to discover Vinho Verde. It’s a Portuguese white wine, very effervescent, and it’s inexpensive. I discovered it when I was stranded on the outskirts of Lisbon one day.”

Jordan is looking forward to giving her books a new life. After a much needed respite from publishing deadlines, she is already in the planning stages for her next work, a comprehensive and definitive look at Sonoma County told through the eyes of someone who’s seen, and tasted, it all.

Previous ArticleHead to the Hills with Markus James

Next ArticleMay 16: A Long Time Coming in Napa