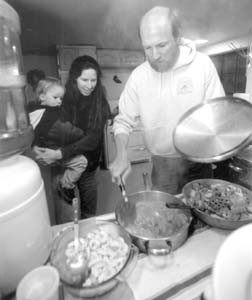 Feeding family and community one meal at a time

INSIDE BOB and Ella Rozettes’ Occidental home the lights burn brightly, and someone moves briskly around in the kitchen. My repeated knocks go unanswered over Dire Straits booming on the stereo, so finally I push open the door and call out a timid hello.

In response a short-haired dog ambles up and nuzzles my hands, and Bob pokes his bearded face around the kitchen door. Ella offers me a drink, but Bob has to keep cooking. It’s 5:45 on co-op night, and he’s cooking for 12 instead of two.

Every Monday and Wednesday night for the past year and a half, one of the seven adults in the co-op takes his or her turn cooking a full meal for everybody else. The evening meals are packed and picked up between 6 and 7 o’clock, and Bob is getting ready for the rush. While Bob caramelizes onions in a skillet the size of a hubcap, Ella talks about their cooperative. In addition to the twice-weekly food pick-ups, the four households (two couples with kids, one childless couple, and a single adult) have monthly community potlucks. The adults take vacations together once or twice a year, went on a couples’ retreat last summer, and still meet three or four times a year for follow-up in the Rozettes’ yurt.

Such neighborly closeness may seem strange to many Americans, who have managed to make the act of eating as streamlined and people-free as possible, but who still claim to want more connection in their families and neighborhoods. Cooking co-ops are one way to bridge that gap. With roots in intentional communities and the good old-fashioned potluck, cooking co-ops aren’t a movement, exactly. There are no national spokespeople or organizations, no lobbies or PR events. But word of mouth is quietly spreading about the transformative power in collectively preparing and sharing food.

Of course, meal sharing is common among people who are already dedicated to community living for other reasons. But the new breed of cooking co-ops is remarkable for bringing together people from separate households, with often disparate interests, outside of wanting to be well fed. These people are looking for connection, yes. But they’re also very busy people.

DEE BOWERS of Boise, Idaho, might be considered a typical cooking co-op member. Five years ago, the anchorwoman and mother of two joined with neighbor Mary Wells and two other families in their neighborhood. Now they get good homecooked meals brought over three times a week, which saves them time and money. Bowers and Wells are so passionate about the joys of co-op cooking that they have even published a book, Homemade to Go (Purrfect Publishers, $14.95), that is designed to give busy people a running start on forming their own cooking co-op.

Bowers’ co-op actually eats together maybe twice a year, which isn’t what people might think when they hear the word co-op. “Most people think that you’re sort of weird,” she says confidingly. “That you’re a little, too, you know …”

“Exactly,” she agrees. “That’s great, but in our case we’re all just so busy. I’d hate to think that every time someone delivered dinner you’re going to have to stand there and talk to them for an hour.”

Even the seemingly laid-back Occidental community contends with time constraints, in its own, er, laid-back sort of way. While Bob stirs the polenta that will form the base for tonight’s dinner, Ella, a dedicated meditator, gets ready to eat and run. “The Tibetan Buddhist teachers with whom I studied always stressed that the most important thing you could do with your life is to meditate. So part of why I don’t cook much normally is because I’ve got more important things to do,” she says. “Cooking for each other is a way to save time, so you have more time to do what’s more important.”

Suddenly, the dog stands up and starts whining. The first crew has arrived, David Vogt and his daughters, Dayna, 7, and Jordan, 5. Bob ladles out the parsley-speckled polenta and tops it with the onions and a heap of prawns, while David chats with Ella and the kids peer over the edge of the pan. The low-ceilinged kitchen is noisy and crowded for five or 10 minutes, then the Vogts are gone. Seconds after the door closes, Bob dashes back into the kitchen. “I forgot the cilantro!” he exclaims, and gets to work amending the tomato-feta salad for the second group, while Ella hurriedly spoons up her dinner.

Other co-ops have dinners that can last for hours, such as the one Julie Bennett of Santa Rosa helped form almost a year ago. Her co-op includes two households for a total of nine adults, one of whom prepares Monday night dinner for the others every week. These dinners have become festive occasions, providing a much-needed Monday evening boost, says Bennett.

“This is a chance for me to try something new, something special that I wouldn’t usually try,” she explains.

“We’re all trying to live in a community-minded way.”

That search for community is a large part of why Rabbi Gary Schoenberg of Portland, Ore., has been in some form of cooking co-op for the last nine and a half years. “As soon as you’re providing food for people, all of the sudden you’re in a space where, when they’re sick, you know it,” says Schoenberg. “And sending a meal their way when they’re stressed to the gills is a natural outcome. When we have high holidays, our cooking co-op provides us with meals. When a family member is ill, it’s easy for me to get the cooking co-op to bombard them with meals. It’s that support that makes community real.

“I’m surprised that people aren’t tripping over themselves to form cooking co-ops, but they somehow have found ways to live without them,” he says with sincere bemusement.

“I’m not sure that they live so well.”

STARTING UP that relationship, though, may feel difficult in a society where we may not even know our neighbors’ names, let alone what they like to eat. But Dee Bowers, who has talked with members of cooking co-ops from all over the country, says existing groups seem to be equally divided between those communities that already existed and those that were formed for that purpose. And they all work.

“The key is starting up,” says Bowers. “If you’re honest and open and communicate up-front and get all your stuff out on the table, then it doesn’t seem to matter if you do or don’t know each other well.”

At the Occidental co-op, I ask whether community or co-op comes first. Neighbor Tom Strand-Brown pauses over a freshly opened brewsky to think about it. “It goes both ways,” he concludes. “Our intention came first, but this helps feed it. It’s one thing to be neighbors and friends, but if you see each other only every four months it won’t work. … There’s a centripetal force, so that we want to do stuff together.”

Not tonight, though. Tom and his wife, Tara, holding their 22-month-old son, Tevin, stand and chat for a bit, but then they head right out the door, with their bulging canvas bag. Bob and I stand there for a few seconds in the sudden quiet. Then Bob turns and asks a very natural question: “You want something to eat?”