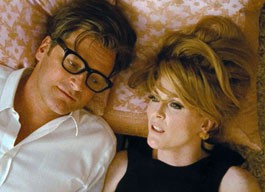 Colin Firth is magnificent in 'Single Man,' suffering a grief that dare not say its name

A handy winner of the award for Most Improved of 2009 is Colin Firth, whose title role in A Single Man is a model of frosty yet sensitive acting. The directorial debut by haute couture designer Tom Ford is beautiful, but it’s the kind of beauty that’s hard to feel anything about. Ford is working from Christopher Isherwood’s novel, essential reading in the gay canon. But Ford directs as if he’s filming a classic; the material doesn’t have any room to take on a life of its own.

Firth plays professor George Falconer, an Englishman in Los Angeles in the early 1960s, when the Brits were still novelty in that city. He’s a bereaved figure; being in the closet, he isn’t permitted to show his sorrow after the death of his long-time male lover in an automobile accident. (In flashbacks, we see the lover, played by Matthew Goode.) This single man’s secret is known only to his friend Charlotte, called Charlie (Julianne Moore), also a former flame, one who has never quite gotten over George.

Falconer has another secret, though: he is putting his affairs in order with the plan of committing suicide that night. During the course of one long day, people reach out to him, offering themselves. These include Charlie, who has a standing date with George for cocktails, and Kenny (Nicholas Hoult), a handsome, persistent college student in a white-pink cashmere sweater. George also encounters a stranger, a Spanish actor (or perhaps a rent-a-Romeo) named Carlos, played by Jon Kortajarena. Ford’s nostalgia factor is strongest during the passages where Kenny is trying to push his way through George’s resistance. This uncertain romance is classic movie stuff: attraction plus resistance with an element of danger.

Certainly, Firth looks like a man of the era in question. His George resembles George Reeves, the actor who played Superman on 1950s television. Firth has just that kind of attractive remoteness. His English control is contrasted with the riotous French Provençale-on-mescaline décor of Charlie’s house, inhabited by Moore in hopped-up hair, and triple-decker earrings; she’s a woman living on Tanqueray and gold-filtered pink Sherman’s cigarettes. Moore practically mainlined her eye-shadow to get that zonked 1960s look.

Her Charlie recreates one of those dance sequences that were popular in art movies of the era, those moments where we’re not supposed to be sure if we’re watching a well-off white woman twisting and shouting or if we’re supposed to be watching a metaphor for the breakdown of society.

The sight of Moore reminds us of the great suspense of those passages in The Hours, dealing with her character Laura Brown’s imminent suicide. Despite the opera on A Single Man‘s soundtrack, it couldn’t be less operatic: nothing seems like a matter of life and death. Ford is good with the placement of actors on a set; he’s a tableau-maker. The art direction is all in order, but the classic-movie looks of the film just add to the air of beautifully appointed early 1960s soap opera. The fine clothes don’t make the men.