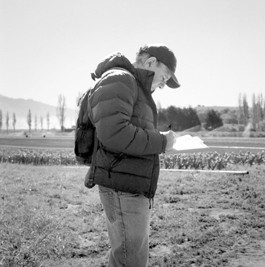 One man's yearlong adventure in eating and living near the earth

This is an excerpt from author and SSU professor Jonah Raskin’s new book, ‘Field Days: A Year of Farming, Eating, and Drinking Wine in California’ (University of California Press; $24.95).

In 2006, when I began my odyssey across the landscape of California’s organic farms, I was nearly 65 years old and beginning to feel that I had a finite amount of time on earth. I was living in Santa Rosa in an old barn that had been converted into a small house with electricity, plumbing and windows. It sat on a road dotted with barns filled with melons, hay, wool and animals.

The fall semester at the college where I taught writing was drawing to a close. I had time, energy and curiosity. I wanted to get out and explore. Before it was too late, before life passed me by, I wanted to be in touch with the earth again. I wanted to regain something I felt I had lost, and to work alongside men and women who were cultivating the earth. I wanted to eat as though for the first time, with a sense of newness.

I began my quest for the old rural life by going to nearby farms that were on my own road, those that advertised themselves and that I could find without the aid of a map. I went to farms owned by friends, or friends of friends, and there I immediately noticed new directions in agriculture. In the 1970s, when I first arrived in California, farms were often sadly inaccessible, and I had only rarely been able to satisfy my curiosity about crops and barns. Even farmers I knew, such as my parents’ close friend Benedict Sobler—a veteran apple grower who taught me the art of pruning trees—were often reluctant to let outsiders onto their property.

In the 1970s, Benedict owned a beautiful old barn that I coveted, in which he stored his Gravenstein apples, a variety that was the pride of Sebastopol. The barn also served as a garage for his beloved blue Mercedes-Benz. Soon after I arrived in Sonoma, I went to work pruning his apple trees so that sunlight and air might penetrate to their innermost boughs, and now they looked beautiful.

In contrast to Benedict’s farm, there were others that I avoided out of fears for my health and safety. Across the street from my parents’ acres, for instance, there was the farm of a man whose face I rarely saw. Several times each year he used to cover himself from head to toe in protective gear and drive his tractor around his farm, spewing chemicals on the trees and the ground and into the air. Rachel Carson would have been appalled.

Afterward, he posted a sign with a skull and crossbones that read: “Danger. Keep Out.” Of course I kept out! Neither he nor anyone else seemed to consider the fact that the wind blew those toxic chemicals across Morelli Lane and into the fruit trees my father had planted, which neither he nor I wanted to be sprayed. We didn’t want the chemicals on us, either.

That cranky apple farmer, with whom I exchanged heated words on the telephone, felt that he had the right to spray whatever and whenever he chose to, neighbors be damned, and he felt no compunction about chopping down all the stately redwood trees on land he owned. That was the attitude of many old farmers—it was their property, and they could do anything they wanted with and to it. This attitude is slowly changing, thanks to environmentalists, whose hard-fought victories benefit everyone.

The county of Sonoma still insists in official proclamations—mailed with annual tax bills—that citizens have the “Right to Farm,” and that citizens who live near farms must expect to “be subject to inconvenience or discomfort arising from agricultural operations.” But farmers no longer have the right to spray toxic chemicals on crops and into the air.

After moving away from the family farm in 2004, I needed to find a place where I could feel close to the earth. I knew I would be welcome at Windrush Farm. Mimi Luebbermann, a farmer in Chileno Valley, invited me to visit. She is a good example of the new farmers who are far more transparent than the farmers of old. As often as farm operations allow, she opens her Windrush Farm to the public. Every summer, swarms of kids arrive to learn what it means to be a farmer and discover the smell of barns and pastures.

She has also hosted events for adults. I attended one such event, when Mimi made dozens of delicious pizzas in her outdoor brick oven, and Molly Katzen, the author of The Moosewood Cookbook, told stories about her legendary hippie restaurant in upstate New York and her own kitchen in Berkeley. I did not notice a gate at the entrance to the long, shaded driveway that led to the farmhouse, or any barriers to the barns, sheds and pasture. “Welcome” was the watchword, generosity the style.

Mimi had come from Oakland, where she raised rabbits and chickens and grew vegetables. For years, she wanted more open space, more land and friendly neighbors who were farmers, too, to whom she could turn for wisdom about crops and animals. In 1995, she made her big move from an urban to a rural existence, and the change ignited her creativity. In the last decade or so, she has written how-to books with titles such as Pay Dirt: How to Raise and Sell Herbs and Produce for Serious Cash, which offer “simple secrets” for farmers and gardeners on how to make money and find happiness by growing orchids, herbs, heirloom tomatoes, cactus, daffodils, quince and kumquats. In these books, which I heard about as she wrote them, she provides valuable information that is not always accessible but all the more important to anyone who wants to farm successfully.

How much “serious cash” Mimi makes from her books and her farm I do not know, and I did not feel it would have been polite to ask. After all, she was from Virginia and had Southern manners, and I did not wish to encroach on her privacy. I could observe, though, that Mimi keeps her farm going with a combination of old ways and reinvented new ones. In addition to selling eggs, rabbits, lamb and wool at farmers markets, she gives classes in the skills she has taught herself and learned from neighboring ranchers.

She’s always on the go—up at sunrise most days—and everyone who knows her comments on her seemingly inexhaustible energy. One of her sons calls her “a whirlwind mom.” Her vehicles are usually old, often battered and rarely attractive, but they get her and her goods where they need to go, which is to say that she’s practical and efficient and doesn’t care about mere appearances.

Mimi was the first person I got to know who talked vigorously—years before it became popular to do so—about the importance of buying local produce and supporting local farmers.

She was a long way ahead of the curve. Even some of her own family laughed at her ideas and thought she was silly and provincial. They pointed out that almost year-round you could get attractive fruits, vegetables and meat from Argentina, Mexico, New Zealand and elsewhere. It took her family and friends—and me, too—a while to understand that local produce is likely to be safer and fresher and to have more nutrients than produce grown and shipped from far away. Only after outbreaks of contaminated meats, tomatoes, spinach and other fruits and vegetables have many shoppers learned to search out produce grown by responsible farms close to home.

The author most helpful on the vast, complex idea of “the local” is Lucy Lippard. In her groundbreaking The Lure of the Local: Senses of Place in a Multicentered Society, she writes about land, landscapes, art and the balance between urban and rural, public spaces and private ones. There isn’t a single major area of contemporary American life that she didn’t touch on, and her provocative book helped me when I went to farms like Mimi’s.

Lippard insists that it’s important to remember that each individual has a point of view. Indeed, I learned that everyone on a farm—from the owner to the fieldworker, tractor driver and truck driver—sees the farm in slightly different ways depending on a variety of factors, including age, ethnicity, gender and class. Moreover, before you can even see a farm you have to believe in it. Otherwise it will remain invisible to you. This is why tourists from urban places who are unaccustomed to farms often do not see them or notice their beauty. If you associate carrots, peas and potatoes with frozen packages in a supermarket, you may not be prepared to see them actually growing in a field.

I resonated with Lippard’s observation that “understanding the local history, economics and politics is a complex, fascinating, and contradictory business everywhere.” Certainly my part of California seems as rich, complex and contradictory as any place I have ever known. Sonoma has farms and vineyards, a long coastline along the Pacific, majestic mountains and fertile valleys, Indian tribes, settlers, outlaws, writers, movie producers and gourmet restaurants.

What is produced in this specific locality—wine, cheese, wool and olive oil—is sent around the world, and workers and tourists come here from afar. It is connected to the whole world and is an integral part of it. I remember my exhilaration when in the midst of my farm odyssey I met the men who belong to the international circuit of sheep shearers. Mike Donovan, who was born and raised in New Zealand, traveled to California and from there to Utah, Idaho and Wyoming to shear sheep, and then he’d go on to Spain, Scotland and Germany. He was paid $2.65 a head, and he could shear nearly 250 sheep in a day. “Wherever there are sheep, I go,” Donovan told me one afternoon, when he took a break from shearing sheep on a farm close to my own home. “Last year, I sheared more than 50,000 sheep.”

From Mike and Mimi, I learned to respect physical labor and to pay attention to the tasks at hand and the tools in my hands.

On days I did not teach at the college, I worked at Mimi’s Windrush Farm in Marin. I did the simplest of chores. For a couple of months, on cool afternoons in autumn, I dismantled the raised beds just behind the farmhouse; after that, I carted countless wheelbarrow loads of soil to another corner on the property. I wasn’t paid a cent—that was agreed—but Mimi always provided thick homemade soups that were meals in themselves, steaming hot after simmering on a back burner of the old-fashioned stove all day long. Sitting in her warm kitchen, I also tasted the cheeses she experimented with from milk from her own cow. You can’t get more local than that.