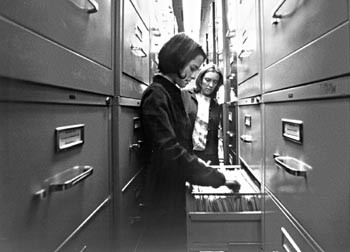 WHAT AN appropriate title Clockwatchers is. Director Jill Sprecher and her sister, co-writer Karen Sprecher, have that usual problem of budding independent filmmakers: How do you stretch out to the necessary hour and a half running time with only one hour’s worth of plot? There’s half an hour of wasted film spent developing the atmosphere of frustration and boredom in a dull business office. And this half hour seems especially redundant, since the best thing about Clockwatchers is its atmosphere.

The film is set almost entirely at Global Credit, an office where four temporary employees are dying a slow death of boredom. The ordeal of the clerical workers here will bring back every humiliating Kelly assignment you’ve endured. Sprecher doesn’t spare us footage of adults playing with Liquid Paper, torturing paper clips, and popping felt-tip markers into a chain to make the world’s largest pen out of them. Jittery fluorescent lights enervate these desk workers. Walls the bilious yellow color of Dijon mustard add to the oppression of the place. Global Credit is patrolled by middle-managers Debra Jo Rupp, Kevin Cooney, and Bob Balaban, authentically depressing martinets, counting the pencils, monitoring the personal phone calls, and using the phrase “It has come to my attention …”

As Margaret, a rebellious, sarcastic career temp, the comic Parker Posey steals the show so thoroughly that the rest of the movie is annoying without her. Posey’s angular frame and tart voice are the edgiest thing in this movie. But the main character and narrator is Iris–Toni Collette, as a big-boned mouse, again. Collette is the Australian actress who played the lead in Muriel’s Wedding and who co-starred as Harriet in Emma. She’s played one too many shy, plain girls. Collette is a large, strong-looking woman, and she could play a real hell-raiser someday. While the Sprechers unleash Collette at the end of the film, most of Clockwatchers has her shuffling through the picture with her hair in her eyes. It may be a quiet performance, but it’s not a subtle one.

The other two temps, in declining order of importance to the story, are Paula (Lisa Kudrow, of Friends), a dim aspiring actress who wants to take the stage-name “Camille LaPlante.” You could pretend Kudrow looks like Teri Garr, but she doesn’t have Garr’s merriment and poise. Kudrow shows all the tendencies of the slumming big television star in an art movie. Her acting is loud and meant to get attention. But Kudrow’s tight, brief clothes, her mugging, her gesticulation, are all easily upstaged again and again by Posey–who will do something scene-stealing like licking her own sleeve to get some barbecue sauce off of it, or commenting that “the smaller the person, the bigger the desk.” Jane (Alanna Ubach) is the last of the quartet, a mild little woman who is about to marry an unlovable cheating man, just for the sake of being married.

In the office where the four are on long-term assignment, a friendship builds. And then it’s shaken by a series of petty thefts; since the temps are the lepers of the office they’re the first blamed. Global Credit hires on a new office assistant–a perm, not a temp–who has all of the earmarks of a spy. (Helen Fitzgerald has the wordless part and she makes a large impression; as the bespectacled peculiar Cleo, she looks like Steve Buscemi’s weak sister.)

It’s a credit to the Sprechers that they don’t bring the film to a strong point–the characters drift apart instead of being driven apart, and the film comes to a delicate finish. But aside from this open ending, Clockwatchers is too cut and dried. Narration is almost always a failing in a film, telling what should be shown, stating what should be suggested. It’s far too apparent what Iris is thinking and what it all means: When she does something especially cowardly, she repents of it on the soundtrack immediately.

Temporary work almost never shows up in the movies. When it did appear–in that risible thriller of a few years ago, The Temp–it reflected the point of management, trembling in dread of the maniac the agency had sent over this time. While the Sprechers stress the boredom of temp work, they don’t give credit to the insouciance of it. There’s usually more than one agency in town. Give Clockwatchers credit, though. It’s talking about the workplace in a current film, and that is as dangerous as talking about sex in a movie was 40 years ago. When the atmosphere of dull-dog office work shows up in a movie (say in LaBute’s otherwise dismissible In the Company of Men), you’re really seeing something positively risqué.

Clockwatchers plays Sept. 4-8 at the Lark Theatre, 549 Magnolia St., Larkspur; 415/924-3311. The screening on Sept. 4 at 7 p.m. will feature Christine Macias from Working Partnership USA speaking about the film and temporary work.