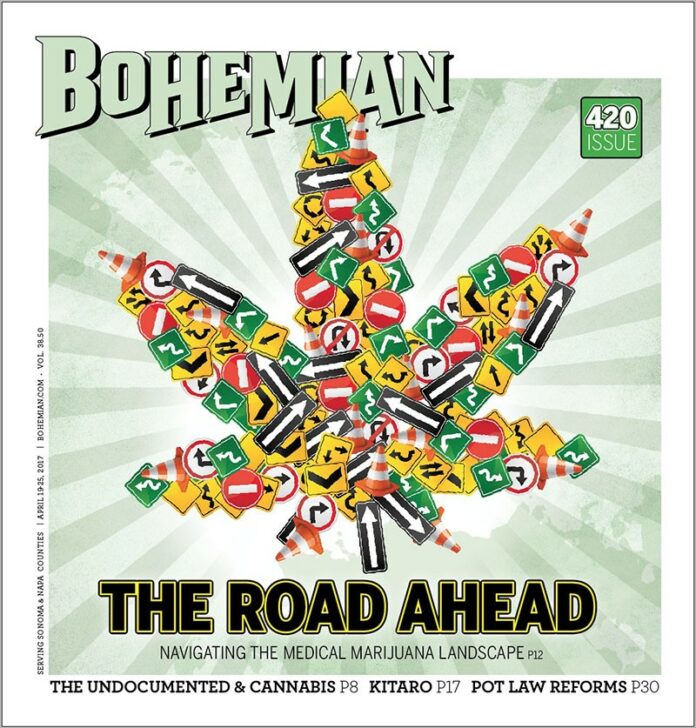 ‘Pharmacists like to meet at 6am,” says Corinne Malanca. “I don’t know why.”

Malanca, co-founder of Marin County’s United Patients Group, is calling early
on a Sunday. She is at the tail end of the March 24–27 weekend American Pharmacists Association Annual Meeting and Exposition at the Moscone Center in
San Francisco. She’s been speaking, meeting with attendees and talking with the early-rising pharmacists as part of her effort to get the word out about the true medical value of cannabis and cannabis-derived products.

Six years ago, when Malanca and her husband, John, first founded the nonprofit educational organization—inspired by their own experiences finding credible cannabis information after Corinne’s father was diagnosed with a fatal illness—the idea that they would someday be addressing a national assembly of pharmacists was barely fathomable. In May, they’ll be in Washington, D.C., hosting a “wine day” event, where they’ll be explaining cannabis science to legislators and their staff.

“Clearly,” Malanca says, “the days when people didn’t want to hear anything about cannabis as medicine are long gone. But not entirely gone. There is still lots of work to do. But new opportunities are presenting themselves all the time.”

Case in point: Earlier this month, the Malancas conducted a day-long educational course at Sonoma State University (SSU). The workshop was titled “Medical Cannabis: a Clinical Focus,” and was led by registered nurse Eloise Theisen and Donald Land, a chemistry professor at UC Davis and chief scientific consultant at Steep Hill Labs, a cannabis science and technology company. The course is part of SSU’s commitment to educating professionals for the emerging medical cannabis workforce in California.

The workshop, heavy with medical detail and discussions of “the endocannabinoid system,” attracted nearly a hundred people—primarily healthcare professionals and a number of workers from a cannabis dispensary in the city of Shasta Lake. One of the day’s most interesting moments came during a Q&A session, when several of the dispensary workers expressed a need for better communication between doctors and dispensaries. Anecdotes were shared that related to clients visiting a dispensary with a vague prescription from their doctor, but no clear direction on which type of product, strain or terpene—used in the medical marijuana business to indicate different types of marijuana, with different effects and uses—they would best benefit from.

Clearly, better communication is needed among clients, doctors, nurses and those who dispense medical marijuana. This morning, as Malanca moves from one conference event to another—taking the conversation onto the elevator at one point—she answers a few questions for the Bohemian about that very issue.

Bohemian: According to the dispensary workers present at the SSU conference, if a prescribing doctor doesn’t know what specific strains or terpenes to recommend, harm could be done by a client making wild guesses and trying something with negative side effects for their particular illness—like trying a product that increases anxiety, when cannabis has been prescribed to treat that anxiety. But [dispensaries] say that there is little they can do because they are not legally allowed to prescribe. Is this the situation as you see it?

Corinne Malanca: Well, there’s actually quite a bit that dispensaries can do. But I have to tell you, that was the first group of dispensary staff workers that has ever chosen to attend one of our conferences. We’ve been doing this for six years, and whenever we bring a workshop to a particular area, we always market our workshops to dispensaries. Because there is a lot they can do, legally, without having to prescribe anything. In six years of doing this, our medical team tends not to refer anyone to medical dispensaries, because they have been choosing not to attend our educational seminars. But there is a lot they can do, without prescribing, that will create much more safety around the communication they have with clients.

For example, if someone comes in and says, “I have chronic pain. What can I take for pain?” The staffer might say, “Oh, well, you can take this, this, this or this.” But if they don’t ask the client if they take opiates, or other medications, there could be a problem. That’s not prescribing, that’s educating. Knowing that cannabis magnifies opiates four-to-seven times their original magnitude, that’s very important. They need that information so they don’t spend time talking about products that aren’t really right for that client.

That seems to be the very point those particular staffers were bringing up. Are you saying that some dispensaries are better informed about the products they provide than others?

Well, yes. In our experience, a lot of dispensaries have chosen not to get the vital cannabis education that we offer. We’ve invited local groups over and over, and usually they never show up. So we were thrilled when that group from Shasta called and signed up.

If a client comes into a dispensary and says they have cancer, well, as you heard at the seminar, cannabis is not a one-size-fits-all kind of thing. It depends a lot on the medical history. Dispensaries should be referring gravely ill and chronically ill people to someone like our medical team. They should not be guessing.

On the other side, a lot of times a new patient at a dispensary gets a “new patient freebie,” as they call it, which is usually an edible of some sort—a cookie, a brownie, a cupcake. But does that patient have diabetes? Does that patient have cancer? Cancer patients shouldn’t be eating sugar. They should not be freely dispensing these things without having a lot of education. And it sounds like the Shasta group does have that information, or some of it, and is doing the responsible thing and getting more.

So they can better answer a client’s questions?

Yes. And so they can know what questions to ask, themselves. We were thrilled that that group from Shasta came.

It was interesting that the perspective that they were representing was that it was the prescribers—the doctors writing the prescriptions for cannabis and sending them to a dispensary—that are most in need of education. That the dispensaries are the ones on the front lines, trying to take care of their clients, but doctors are undereducated on how to counsel a patient as to what kind of cannabis they should be using.

I totally agree that better education for all health professionals, and better communication, is exactly what’s needed right now. My personal opinion is that if a client who is gravely ill comes into a dispensary and has come with a recommendation from a medical professional about which formula and dosing to use, there should be a specific place to go—other than a cannabis dispensary intended for the general population—where they can get very specific medical advice. But, yes, communication is key.

In a place like Marin, where there are no brick-and-mortar dispensaries at the moment, what options are there for people who have a clear prescription from a doctor, and have been given solid advice from a medical professional?

Well, there are reputable mail-order services within California. Organizations you join, under the right circumstances, and they provide you with the exact items, the formulation and potency and dosage that your doctor or medical professional recommends. That’s what we recommend. The medicine is sent directly to their house, so they don’t have to go anywhere.

From hearing your story, we know you had to learn a lot, very quickly, when you were trying to determine how best to take care of your father, who was failing, unable to eat and wasting away. And no one had the information readily available.

It was mind-boggling! On the flip side, it was awe-inspiring, and I might even say addicting. [Laughs] Can I use that word? There was so much to discover. We became ravenous for any new information that became available. Yes, we’ve been buried in it, and working six or seven days a week ever since.

So what do you think needs to happen now, in order to get reliable information out to the public?

It’s got to be a grassroots thing. But it’s important—it’s a life-or-death matter, actually—that the grave and chronically ill, people who don’t have a lot of time, don’t get caught up in this tangled web of misinformation and fear that’s out there.

Unfortunately, there are still a lot of people out there who don’t want the information. They have an aversion to this industry, and they just don’t want to know. And people are suffering because of it.