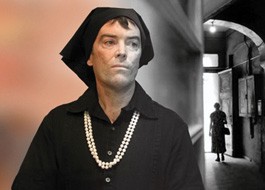 Steven Abbott dazzles as his 'Own Wife'

Some life stories are so fascinating and full, so dramatic and off-the-wall, that one almost can’t believe they really happened, as much as you may want to. In Doug Wright’s I Am My Own Wife, which premiered in 2003 and won the Pulitzer Prize the next year, Wright tells of meeting an eccentric German antique collector named Charlotte von Mahlsdorf—murderer, transvestite, survivor of two oppressive regimes. The story she told Wright, shortly after the fall of the Berlin Wall, was so riveting, inspiring and illuminating, he knew it could and should be told onstage.

In the award-winning play that resulted from these interviews, one actor portrays more than 40 characters, including Wright and von Mahlsdorf. The first actor to tackle the challenge was Jefferson Mays, whose performance earned him a Tony award for best actor. Four years ago, at the Sonoma County Repertory Theater, Steven Abbott appeared in a production of Wife directed by Jennifer King. Abbott’s performance is still talked about as one the great moments in North Bay theater. Last week, in a sparkling new production at Spreckels Performing Arts Center, Abbott returns with King once again directing.

Clearly, some things do get better with age.

Abbott, who’s not performed onstage since the Rep run of Wife, has deepened as an actor, and it shows from the first moment he appears, in black dress and pearls, as von Mahlsdorf. The miracle of Abbott’s performance is how quickly and completely he makes us believe he is an elderly German transvestite one minute, a gay Southern playwright the next and a cruel German bully the next. Snapping from one character to another, Abbott’s ability to create a believable human being in just seconds, sometimes with only a line or two of dialogue to establish that character’s attitude, is nothing short of astonishing.

Director King’s pacing of the show, crucial in a production of this kind, has been significantly tightened compared to the Rep production. With casual deliberateness, each scene grows progressively more tense, the pace matching the mood as the mysteries stack up and von Mahlsdorf’s stories become increasingly more detailed.

As written, there are surreal touches that I still find distracting, such as the playwright’s idea of using tiny miniatures to represent the furniture that von Mahlsdorf lovingly shows off to visitors. Though a little confusing (wait, is her house really full of teeny-tiny armoires or . . . oh, I get it, they’re representations!), the conceit does offer some rich possibilities. The gentle way Abbott cradles each miniature shows in a flash how much love von Mahlsdorf has for each antique in her home.

Though filled with big, flashy acting opportunities, Abbott is most effective in such tiny moments, tossing out little gestures or expressions that frequently seem to transcend acting, so authentic and grounded is Abbott’s feat. As rich and complex as the play’s central character, Abbott’s performance is well worth catching. Like von Mahlsdorf herself, this is an act that surely won’t be easy to forget.