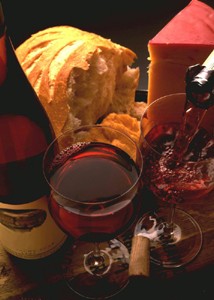 Sucky Clip Art Aside . . .: We use this spot to announce that, in addition to every other thing in the world he does, Clark Wolf is writing a book about cheese for Simon & Schuster.

Imagine the day is hot. A young nomad, preparing for a long trip across a dusty, Iraqi landscape, carefully fills a stretched calf’s stomach with milk, assuring himself sustenance for the journey. Tied to a camel, the milk-filled bag bumps and sways as the morning brightens. Finally tired, the man stops for a rest and a filling drink. But instead of finding the white froth he had poured into the carrier, he sees that the liquid has both collected and separated. One he can chew; the other, he can drink. Cheese had come into the world, and it was good.

Or so the story goes.

Said to have been discovered in Mesopotamia long before the miraculous myth of Jesus’ birth was even dreamt, cheese probably was a lucky accident. Hailed in poetry by Homer, drunk as fermented mare’s milk by Aristotle and codified for digestive pleasures by Varro, cheese was a widely traded commodity by A.D. 300. Roman price-fixing became the norm, apple-smoking of the rinds popular, and Parmesan–then known as “la Luna”–a household staple. The wormy pleasures of Gorgonzola were enjoyed as early as A.D. 879, Roquefort has pleased kings since 1070, and Cheddar has been available long these last 500 years.

While all the ancient world did not exist solely to presage the Ferry Building, a rudimentary human legend did take shape during the nomad’s travel. And somewhere in the historical arc between our nomad’s lunch and the no-refrigeration-necessary chemistry of Velveeta, a culinary love story has been written.

Perhaps one of those most deeply smitten is consultant Clark Wolf.

Wolf, 54, is an epicurean bon vivant with breathless energy. His recipe for bruschetta is found in the original Silver Palate cookbook; he reintroduced the concept of fine dining to Las Vegas after that city’s post–mdash;Rat Pack wilt; he’s served as the executive director to the American Cheese Society during off-hours, from his basement; he “discovered” chèvre maven Laura Chenel, thus making goat cheese a mainstream staple; and he helped shape James Beard’s dairy palate and ran two Bay Area cheese shops at once–all of which should cheer other souls wondering what to do with a degree in English literature.

While Wolf’s breadth of activity and influence is dizzying, a deep and sensual love of cheese remains at the center. To that end, he and UC Davis farm adviser Barbara Reed, together with Wolf’s partner, Scott Mitchell, have created another first, the California Artisan Cheese Guild (CACG). Its launch will be announced at yet another of Wolf’s projects, the second annual Russian River Food and Winefest, a daylong symposium, demonstration and appreciation of Sonoma County’s agricultural bounty that has been organized and invented by Wolf and Mitchell.

Caught by cell phone as he and Chenel travel in a bus packed full of jolly, near-shouting food journalists out on conference junket, Wolf keeps his focus. “California cheese makers are very independent,” he explains, as a roar of laughter explodes on the bus around him. “The most important focus [of the guild] is for cheese makers to connect with each other. It’s for the cheese maker and the dairy maker, and it’s also for a happy, nibbling public.”

There are only a few other such guilds in the United States, not surprisingly located in Vermont and Wisconsin, states renowned for their transformation of ordinary cow’s milk into something higher. The Real California Cheese program has of course beamed its bright orange image into every West Coast household, but Wolf and Chenel both remind that that entity’s mission is to spread the word about milk-based cheeses. The CACG embraces woolier animals, aiming to benefit producers and consumers alike of goat and sheep–as well as cow–products. The guild’s website at www.cacheeseguild.org, not yet active, will eventually serve as a clearinghouse for information and events, and serve as a community for artisanal cheese makers and their admirers.

None of which even begins to explain Wolf’s affinity for cheese as metaphor. “I was in Italy once,” he says, “and I went to a cheese shop. I don’t speak any Italian and they didn’t speak any English. We talked for half-an-hour,” he chuckles, “and I wept twice.

“Cheese shops are where people share good gossip; where they talk about life.”

A first-generation American whose parents emigrated from Bucharest, Wolf grew up visiting a grandmother who always had curds on the table for breakfast and lunch, a homely old-country offering from a woman who lived in the Hollywood hills. Some 50 years later, Clark is adamant that such craftspeople as Ig Vella (Vella Cheese), Sue Conley (Cowgirl Creamery), Laura Chenel, Cindy and Liam Callahan (Bellwether Farms), the Marin French Cheese Company and Peluso Cheese Co.–all members of the newly minted guild–are making not only the best food of their kind in California, but, he insists firmly, in the world.

“It’s alchemy and chemistry and farming and hard work,” Wolf says as the journalists carry on behind him. “Really hard work.”

Russian River Food and Winefest Best of All Worlds

The California Artisan Cheese Guild launches with a reception in the VIP tent at the end of the second annual Russian River Food and Winefest. A daylong celebration of North Bay comestibles, the event features cooking demonstrations by the likes of Herbert Keller of Fleur de Lys, Duskie and John from Zazu and Traci des Jardins of Jardiniere. A panel of authors discussing the importance of comfort foods includes Marian Burros of the New York Times as well as Michele Anna Jordan and John Ash. Winetasting includes pours by the elusive Robert Rue vineyards, as well as La Crema, MacMurray, De Loach and others. Artisanal cheese will of course be available to taste, and the VIP slate includes expertise on coffee preparation and olive oils. Russian River Food and Winefest, Sunday, Sept. 25, from noon to 5pm. At Fife’s Roadhouse, which concurrently celebrates its 100th anniversary, 16467 Hwy. 116, Guerneville. General admission, $15–mdash;$20; VIP, $35–mdash;$45. www.russianriverfoodandwinefest.com.

World of the Work