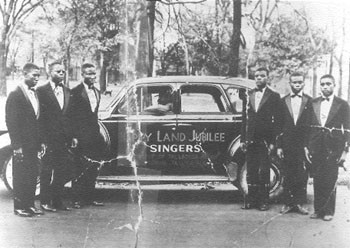 The gospel according to Clarence Fountain

IN THE FIRST 2,000 years, there was a big change that came into the world and the world was destroyed by water. In the next 2,000 years, Jesus came, and now in this 2,000–gospel is making its mark.”

So sayeth Clarence Fountain, explaining the Holy Rolling head of popular momentum that gospel music has picked up since its peak in the ’50s, revitalized in part by Paul Simon’s 1983 hit song “Love Me Like a Rock,” and exemplified in whole by Fountain’s soulful, swinging witnessing with the Blind Boys of Alabama.

A gospel singing group whose roots stretch back to 1937 and Alabama’s Talledega Institute for the Deaf and Blind, Fountain was 12 when he and five friends–only one of whom was sighted–joined together as the Happy Land Jubilee Singers, inspired by church Sundays and the sounds of the Golden Gate Quartet broadcast weekly on the radio. Sneaking off-campus to entertain servicemen stationed near the school, the Happy Land singers eventually decided that their happy lands lay far away from the halls of education.

“One summer out of school,” remembers Fountain, speaking by phone from a Denver hotel, “we just decided that we didn’t want to go back. Our mothers and fathers had taught us how to pray, and I knew that God takes care of the little bird and the sparrow, and that he could take care of me.”

Whatever one’s spiritual beliefs, it’s difficult to deny that Fountain has been taken care of, blessed with a singing voice that soars as rough and strong as the Red Sea upon parting. Whether utilizing an a cappella sugar or swinging low in traditional call-and-response rhythm, Fountain and the Blind Boys–appearing Nov. 16 at the Mystic Theatre–well, groove.

Touring on the strength of their recent release I Brought Him with Me (House of Blues) recorded live last year at Dan Aykroyd’s House of Blues club in Los Angeles, the Blind Boys have come nearly six decades down the road from their tour-car beginnings as boy wonders.

The apex of the group’s popularity as a touring band struck in the early ’50s before such gospel-based singers as Sam Cooke and Marvin Gaye broke with tradition and started a soulful one of their own. Competing in cutting sessions with the Mississippi-based and similarly named Five Blind Boys, Fountain’s shout-downs with Mississippian Archie Brownlee became the stuff of legend, the two singers vying to best each other on stage, finally joining in powerful duets that sometimes resulted in audience members exhibiting the kind of Pentecostal-style aisle-twitching seen in congregations where snakes are handled.

By 1957, gospel was changing, with many of those singers brought up in its rich tradition choosing to witness for the almighty dollar. Not Fountain.

“This is the deal,” he says seriously. “You don’t play with God,

because there’s no straddling the fence. He doesn’t want someone who could go over to the devil’s side. He don’t want you to play to God today and to the Devil tonight. He put us here so that we could give him praise.”

Fountain broke with the group in 1969 to pursue a solo career, recording two albums for Jewel records and taking a 10-year hiatus before rejoining the group in 1980. But it was the Blind Boys’ center-stage appearance in 1983’s Obie-winning adaptation of a Sophocles play, The Gospel at Colonus, that gave the group their longevity.

With Fountain and original members Jimmy Carter and George Scott in their 70s, this worldwide sweep is the Blind Boys’, the band choosing instead to rejoin a touring production of Colonus next February for good. Fountain sees this gig as a rest. “The good part of it is that we’re getting to the masses,” he reasons. “We’re not just singing to black audiences.”

As for his decision not to jump off the gospel bandwagon, Fountain is philosophical. Admitting that he was tempted once to record a version of the Hank Williams hit “Your Cheatin’ Heart,” Fountain prayed and found the answer that he wanted. “I sing about love of the Lord,” he says. “I don’t sing about baby-love.”