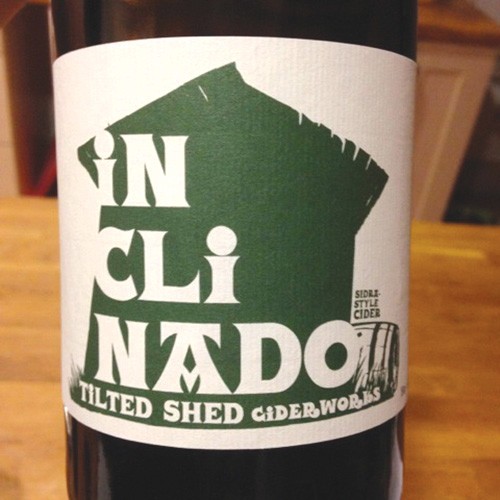 Shedding some light on the craft-cider boom

Cider drinkers are thirsty. Not only for a low-alcohol, refreshing alternative to beer and wine, but also for knowledge, insight and tips on how to appreciate and evaluate the apple-based beverage category that’s growing by 70 to
90 percent a year.

Tilted Shed Ciderworks and cider blogger Tom Wark have teamed up to help.

Over a year ago, having spent some 25 years in the marketing and writing side of the wine business, Wark had never heard anyone mention cider much, until one day a friend twisted his arm to try a few over lunch. “No, no,” the friend answered his objections, “this is different.” And none of the six or seven craft ciders tasted anything like the “liquefied Jolly Rancher” he had expected from mass-market cider. “It was a revelation to me,” says Wark.

When he looked for more information on craft cider, he found it lacking. So he started his own blog, the Cider Journal.

Tilted Shed Ciderworks’ Scott Heath and Ellen Cavalli opened a tasting room at their Windsor production space in October 2014, and cleared out a spot amid a jumble of tanks and barrels for their first cider appreciation seminar last fall.

“There’s an upper echelon of cider makers in America,” Wark told a crowd of budding cider fans, “and you’re in one.”

After a look at the history of cider—the first mention is in 55 B.C.— Cavalli and Wark introduced the aroma and flavor categories used to evaluate cider. A cider’s spicy component may range from sweet cinnamon to white pepper, for instance, and its “funk” can vary from the yeasty/bread side of the spectrum, to tangy/sour and on to musty/barnyardy—not in a bad way at all.

Tilted Shed’s Graviva! is a Gravenstein blend, and at just
1 percent residual sugar (similar to a Brut sparkling wine) is the sweetest they offer. Barred Rock is aged in Hooker House bourbon barrels; Inclinado is a cloudy, Spanish-style sour cider; January Barbecue is reminiscent of the smell of a wool sweater after a campfire at the beach. A version released this February was made with apples smoked with Zazu Kitchen’s Black Pig bacon.

Also look for Tilted Shed when they pair up with cheese specialist Janet Fletcher at the Flavor Summit at the Culinary Institute of America-Greystone, March 13, and the California Artisan Cheese Festival, March 21.