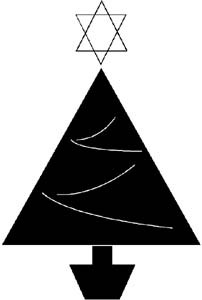 Best of Both Worlds: ‘Tis the season of celebrations.

I grew up in Kansas. There were not a lot of Jews in Kansas. In terms of diversity–well, where I lived, if you had curly hair that wasn’t blonde, you were exotic. My Jewish father, handsome in WW II uniform and ever ready with the charm and good jokes, long ago convinced a smitten Australian nurse named Heather Jean McGregor to leave her bucolic Down Under paradise and join him in this alien Midwestern suburb where tennis whites, conformity and early afternoon martinis ruled the day. Happily, my parents did not bind themselves tightly to that old Bible belt, but wore it loosely, if at all.

From a child’s point of view, it was a win-win situation. The Scottish lassie with the funny accent learned to make matzoh balls, and my father and I haunted the Shriners’ Christmas tree lot in hopes of finding a bargain on our Hanukkah bush. Our house could have been the subject of a different version of the movie When Worlds Collide, but in terms of the holidays, this was a very good thing.

One of my favorite skits from an old Saturday Night Live holiday special has Elliott Gould hosting an Elks or Masons gathering, leading the members in the singing of the traditional Christmas carols. After the first verse, only the Jews are left singing, as only they know all the words to all the verses to even the most obscure Christmas carols. My father, a Shriner, was in one of these mysterious orders which I associate with late-night poker games, red fezzes with tassels and loud men who pinched my cheek and then asked me to go make them a scotch. Furthermore, I was voted “master of revels” at my school– me, one of the two Jewish girls in the class–and it was my job to lead the entire school in the traditional Christmas caroling and even the lighting of the yule log. I wore a jester’s costume and had a mini-me on a stick with bells on his cap that I rattled as I sang. To this day, I can still sing “O Come All Ye Faithful” in Latin, and I know all the verses to even the trickier songs like “Good King Wenceslas” or “Bring a Torch, Jeanette Isabella.” But I mainly remember this skit because it seems so completely normal, because my own holidays were such studies in cross-pollination. My brothers and I would horse around, loudly substituting the words “O Hanukkah Bush” for “O Christmas Tree,” or “I’m Dreaming of a White Hanukkah,” and it worked just fine, despite a few extra syllables.

My suburb was fiercely competitive about Christmas decorations, and the Thanksgiving turkey would barely have made its natural evolution into the soup pot before inflatable snowmen and styrofoam reindeer began sprouting in peoples’ front lawns. One of our tallest downtown buildings projected an outdoor slide show on the wall telling the story of baby Jesus and the birth of Christmas. Cars would wait in line to see the 20-foot images of the donkey and the Wise Men, then drive up, watch it a while with their heaters on and engines idling, and then move forward so the car behind them could watch.

Every Christmas, my mother got terribly homesick. About a week before the big event she would become more and more agitated, threatening to call off the family dinner we always hosted. While pacing, she would repeat, “I want to go home, I want to see my people.” I would sometimes come home from sledding, rosy and full of the steak soup that one of the other mothers made for us, to find my mother conquered by that more difficult darkness of a Midwestern 4 o’clock December. She would look up, give me a faint smile, then continue sipping Drambuie from a little rose-colored glass while staring out the window at the bare, ice-encrusted branches and dead lawns.

My father would ultimately arrange for a long-distance phone call at some odd hour, as it was a day later down there, already Christmas to our Christmas Eve. As my mother’s voice was passed around from sister to sister, her accent would grow increasingly stronger. But when her lone brother was put on the line, the tears would start pouring down her cheeks. I would sometimes get to talk with one of my aunties, and was amazed at how they spoke of the heat or the fresh peas from the garden while we were shoveling snow and fencing with icicles.

Strangely, my mother only called home at Christmas, and even after all the weeping, she seemed revived by the contact. The call fortified her, made her ready to don her holiday apron with the glittery poinsettias and dive into the final preparations before the onslaught. We spied on her through the bars of the upstairs banister, relieved that she was humming as she carried up from the basement a box of old Christmas bulbs from Australia which she hung on the tree herself after midnight.

Driving around my neighborhood now in Sonoma, I see people hauling out the nativity scenes, the candy canes and sleighs and reindeer. I always put blue lights on my house as a nod to Hanukkah. Some people bemoan assimilation, decrying the fact that Christmas dominates all the holidays, but I say it all began, long ago and far away–before people began killing each other because their god was the best god, before everything got so fractured–as a celebration of light in the dark of winter, a chance to feast and gather with friends. Looking at the holidays this way, I see how connected we all are. We were all of us once merely bog and cave dwellers, hoping for a bit of merriment in the dead of winter. And now, each with our own version of a torch, be it Kwanzaa, Hanukkah, Christmas or any other, strive in common to keep the darkness at bay.

Despite having been a religious dilettante, never having tasted holy wafer or had a bat mitzvah, I never feel confused or slighted. I feel more like some lucky traveler with dual citizenship, allowed to experience all the holidays without the pressure to find one superior. And that’s a holiday gift that keeps on giving.