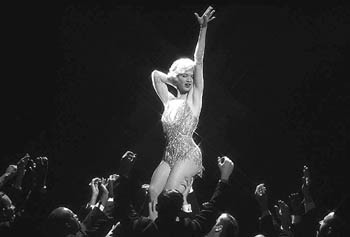 Killing Me Softly: Renee Zellweger gets the job done by any means necessary in ‘Chicago.’

Author Laura Pedersen is a tough customer. A one-time professional gambler–way back in the 1980s, when she was a mere teenager–Pedersen went on to parlay those steely nerves and scary mathematical talents into a lucrative career as a stockbroker, banking her first million dollars before she was old enough to buy a drink.

Since then she’s become a New York Times columnist–the youngest woman to ever do so–has written several books (Play Money; Street-Smart Career Guide; Going Away Party), and landed a job hosting the popular Oxygen Media personal finance show, Your Money and Your Life. The native New Yorker–raised in upstate Buffalo–could not have achieved such accomplishments without possessing a serious set of killer instincts.

Still, unlike Roxie Hart and Velma Kelly–the sexy jazz-era murderesses from the estrogen-charged new movie Chicago, which Pedersen and I have just watched in all its immoral glory–Pedersen has never actually killed anyone.

“Not yet, anyway,” she laughs when I ask her. “Though I’ll admit that when you’re making and losing $1.3 million in a single afternoon–which happened to me in the crash of ’87–your emotions do run high and people do get desperate. When there’s a lot of money at stake, tempers run hot. That’s why there are such stiff fines for fighting on the stock exchange floor, because there are some real knock-down, drag-out fistfights from time to time. I had more than a few close goes myself.”

As she speaks, there is a wistful tone in Pedersen’s voice, a leftover shred of nostalgia for those good old stock exchange days, when adrenaline and fortune ran as high and free as the bullets flew back in the days of Roxie Hart’s Chicago. In her latest novel, Beginner’s Luck, Pedersen lets fly with a warm-hearted comic yarn about Hallie, a wily teenage cardsharp whose fortunes take a turn when she meets the refreshingly offbeat Stockton family, a clanful of oddballs and very strong women, whose little eccentricities provide the fertile ground that Hallie needs in order to find her own sense of inner power. It is, of course–guess what?–a fictionalized version of Pedersen’s own story.

“I was always moving in the opposite direction of the crowd,” she admits. “My parents raised me with all the freedom and independence and rope-to-hang-myself-with that I wanted. I was not exactly sheltered from the ways of the world.” Perhaps that’s why she enjoyed Chicago, the story of two women whose individual career paths include killing their rotten scoundrel lovers and using the notoriety to become stars of the stage.

“I think everybody loves a rags-to-riches story,” she says. “Women know that, historically speaking, the system has given us a hard time. We’ve been taken advantage of because we were female and made to feel that we had no power. So when we go to a movie like Chicago, and we see a woman craftily using her wiles to beat the system, it’s hard not to want to cheer her along.”

“Even though she’s, you know, killing people?” I have to mention. “She’s cheating and lying and using everybody in sight.”

“Hey, whatever it takes,” she replies. “In the scene where the women on death row all perform the cell block tango, singing about the men they’ve killed–‘He had it comin’ / He had it comin’ / He only had himself to blame’–there’s a big underlying sense that these women have been put through a lot by those men. Not that all men are bad or all women are saints. We’re not. But I have to tell you, when those women stand up there without apologizing and tell those stories, I wanted to cheer like we all did when Chief Brody finally blew up the shark at the end of Jaws.

“It was just,” she laughs, “so satisfying to watch.”