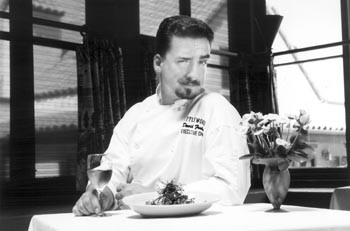 THE WALKWAY from the Applewood Inn restaurant to the orchard curves past a burbling fountain, apple trees, and Mediterranean landscaping. The morning sun casts a golden glow over the little Guerneville valley in which the inn rests, and executive chef David Frakes seems pleased with the surroundings. “I’m very happy to be here right now, doing this,” says Frakes, as he squints at the apples, which are almost ripe. “I’m learning where the food comes from, when it’s supposed to be picked and served.”

It’s an interesting contrast to his three-year stint at the prestigious Ritz-Carlton Hotel Dining Room and Terrace Restaurant in San Francisco, where one could get anything, as Frakes says, “flown in from Maine at 2 o’clock in the morning.

“But out here you actually see that you’re not supposed to pick peaches until they’re ripe.”

From the reviews that Frakes has gotten since his arrival at the Inn in January of 1997, it’s clear that he’s got the hang of the harvest thing. Frakes’ snappy creations, based on the wine country sensibility that Applewood owners Jim Caron and Darryl Notter had cultivated for years, have been drawing attention from travel and lifestyle magazines from along the West Coast and across the country.

And yet, as he walks briskly away from the garden, Frakes, 29, offers some perspective on what looks to an outsider like a rather exciting climb up the ladder. “I have 10 years left to prove to myself whether or not I deserve it,” he says. “I feel like I’m on the right path, but I’m at a point where I have a lot of growing to do.”

Growth, in this case, has as much to do with earning potential as artistic genius or culinary skill. “I’m working this hard because eventually I’ll be making enough money to provide a house and all that stuff, maybe have a family,” says Frakes. “But the only way I’m going to do that is if I work my ass off right now.”

In the rarefied world of fine cuisine, Frakes’ manners and ambitions are appealingly straightforward; this Sacramento boy knows his economics from his escargot. But he was raised for life in a toque by his grandmother, a well-to-do gastronome who urged the young Frakes to enter the culinary world from a very early age, and took him to fine restaurants in San Francisco when he was 15 or 16. Grandma also picked up the tab for Frakes’ tuition at the California Culinary Academy in San Francisco, where he fled from the Sacramento wastelands in 1991.

About a year after he emerged from the culinary academy, Frakes landed the first of a series of positions at the Ritz-Carlton, and eventually snared the lead fish station under the famed chef Gary Danko. It would prove to be yet another formative experience for the wide-eyed young Frakes. “I was getting my ass whipped every day by a hard-core chef. Gary was difficult,” Frakes continues in a more careful tone–after all, he is discussing his mentor–“but I appreciate every moment that he ever gave me, because he’s such a perfectionist. He knows his stuff and he goes out of his way to teach it. … That’s something I hope I would eventually be able to give other cooks.

Forty-five may not seem very advanced in a culture that routinely pushes the envelope of longevity. But Frakes talks sometimes as if he is already hitting middle age. “I feel like I’m going to hit 30, and it’s going to be like Logan’s Run. I’m going to float up to the ceiling and blow up or something,” jokes this young man who just 30 seconds earlier shared his unlikely predilection for the Brazilian thrash-metal band Sepultura and other “aggressive” rock “that probably teenagers listen to.

“My 20s are over; I really do need to have a game plan now. By the time I’m 40 I do want to be able to consider retiring, and that groundwork needs to be laid now, 401(k)s and stuff like that.”

FRAKES LAYS out his next steps methodically: maybe a slightly larger place, or a big house supervising 10 cooks, and eventually owning a small restaurant in the avenues in the west side of San Francisco. This is a man with a game plan. But the next minute he’s talking about his chocolate Labrador retriever puppy or angsting a little about the high divorce rate among chefs. “I have more respect for chefs who are [professionally] successful and are happily married, too,” he says thoughtfully, stroking his brown goatee. “There must be a secret to it, and I’m hoping we’re working on it.’

So far, so good, for his five-year marriage. “I feel like I’m very fortunate to have an understanding wife who knows, or I think knows,” he amends with a grin, “that the reason I’m putting all the effort into this is for us.”

Frakes is not letting the effort go unrecorded, either: He keeps albums of his work at Applewood. After an unsettling interview experience at a famous San Francisco restaurant, he decided that he never wanted to feel empty-handed and open-mouthed in that situation again, so he began assembling recipes, menus, and photographs of his work. “I look back and I’m not happy with it,” says Frakes. “Right now I’m doing the foods I wish I had started out doing when I first came here.”

Nevertheless, he’s finishing up the third album now, and has already given a copy of the first two to his grandmother as a thank-you gift.

“She helped me make a really good decision, thank God. If she hadn’t, who knows where I’d be?”