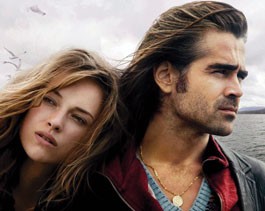 Mermaid kitsch must be thundered against, but there’s a surprising amount of grit in Neil Jordan’s Ondine. In his 16th film, Jordan is clearly working to please himself. The Irish locations are close to his home, and maybe not since The Company of Wolves has he had so much success with Irish magical realism.

I went in unenthusiastic, but it dawned on me once I started watching Ondine that the only thing I would be able to think about for weeks would be the fate of the oceans. The incomparable cinematographer Christopher Doyle brings out the sparkling gloom of these waterscapes, summer’s sunlessness, the lambency that’s almost as emotionally piercing as Irish music.

Syracuse (Colin Farrell) is known to all and sundry as “Circus,” because of the drunken clowning that has marked his life. He has been, however, nearly three years sober on the morning he goes out fishing, and his purse seine hauls a half-dead lady out of the waters off the coast of County Cork.

Ondine (Alicja Bachleda) has a hard-to-place accent; she asks for shelter and to be hidden from the sight of the locals. Syracuse agrees and confides only in the village’s blasé priest (Stephen Rea). Word gets out, though. Syracuse’s precocious, crippled daughter, Annie (Alison Barry), decides that Ondine is a selkie, a Celtic were-seal in human form. Early on, Jordan gives viewers room to be skeptical. After Syracuse first broaches the subject of Ondine, as if he were reciting a bedtime fable about a lady in the water, Annie responds, “That’s a really shite story.”

The same, if less profane, bemusement comes from the padre, whom Syracuse uses as an AA sponsor because there isn’t one in the village. Rea genially revives the old tradition of the Irish movie priest, powerless to defeat sin but damned if he’s going to approve of it, either (“Ya wouldn’t want to say a few Hail Marys on your way out?”).

Long-lens shots bring out Farrell’s virility through juxtapositions. Jordan poses him to look like Hercules, drawing a boat into shore from a rope on top of a cliff, and the forced perspective make the big boat look like a toy. We also see him towering over a lighthouse as if he were Gulliver in Lilliput.

In close-ups, Farrell does a covert job of acting, where shadows conceal his face and hair conceals his eyes. It’s the best kind of something-missing performance yet by this actor, who seems to be getting better in his recent films. That he is working alongside Bachleda, his real-life partner, ensures one of his most relaxed and touching performances.

Luckily, Farrell is working under a companionable director—friendly but with a tough, grave streak. Jordan doesn’t oversell the heartbreak any more than he oversells the fantasy. And Syracuse picks up this air of nonchalance, telling Ondine, “Maybe you just walked into the sea because of a bad marriage. I did that once.”

Jordan’s previous aquatic picture, In Dreams, suffered from too many logical explanations, and eventually, Ondine comes to that point in the film where it must provide a perfectly reasonable explanation for all this. Jordan keeps this section short, but unfortunately, here is where the film has its supposed climax. It’s a murky standoff, and Doyle’s gloaming lapses into semidarkness.

But these few lapses fade in the memory as if they were a coda. More memorable are the elements of Ondine: the light on the water, the salty quip, the sense of possibility.