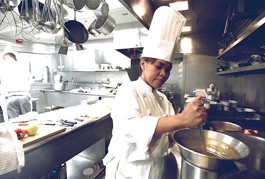 Change We Can Eat

An exhortation to taking action in the garden, on the plate

Splitting his time between Guerneville and Manhattan, acclaimed consultant Clark Wolf graces these pages with an occasional diatribe from a periodic local.

There’s been a lot of talk in foodie circles lately about White House vegetable gardens and ad hoc committees to advise the first family about state dinner cookery. A lot of it is hooey—or wishful thinking—but much of it is heartwarming and sincere and a very good idea in these rather difficult times.

The chatter had Alice Waters forming an advisory group to suggest candidates for a new White House chef, even though the talented Cristeta Comerford, who now holds the position, is in no danger of being fired and has no plans to leave; in fact, she was confirmed in her post on Jan. 14. Those bandied about included Rick Bayless of Chicago’s Frontera Grill and Topolobampo, where the Obamas have often supped, and the talented Southern chef Scott Peacock, much loved for his work with the late Edna Lewis (perhaps America’s most celebrated African-American chef).

Those toques are all publicly committed to the local/regional/sustainable practices now at the top of our radar screens. The thing is, a significant focus on just this sort of good, first-family cookery and food policy has been in place since early in the Clinton years. Credit Hillary for a lot more than her famously good chocolate chip cookies; she had a kitchen garden (admittedly, mostly herbs and tomatoes) installed on the White House roof. Even Laura Bush is on record as requesting organic ingredients, for family and state meals, whenever possible. Waters and other passionate voices might wield more heft if they were connected to a bit more good homework and generous acknowledgement of some very real and underreported efforts of recent years.

(In fact, we should all feel free to send recipes, menu suggestions and maybe even some heirloom seeds suitable for garden harvest in the Washington, D.C., area to Michelle Obama, who will be in charge of White House food-related activities—which may or may not include resonant symbolism.)

Then there’s the flap about the man nominated to be secretary of agriculture. Among those proposed for the spot by well-meaning but deeply uninformed advocates was the popular journalist Michael Pollan. Talk about fantasyland. Pollan writes intelligently and movingly about his thoughts and discoveries as a science reporter. He has virtually no interest in (or knowledge about) the workings of huge federal programs and has less than zero interest in leading an agency. He’s effective and cozy just where he is, having even stated his intention to move on from food writing to other compelling topics. (Drat.)

New York Times op-ed columnist Nicholas Kristoff frames things another way. He says we ought to have a “secretary of food.” Now you’re talking. But still, there’s an agency to run, if only to redirect it, and new ways of thinking to employ. It’s refreshing common sense to read other voices proclaiming that air, earth and water purity are all part of food, and that agriculture is for the purpose of making food, not just business.

This integrated approach is certainly a top goal, so it does make sense to try to charge a former Iowa governor with bringing together old ways and new. Sure, his state sports plenty of post-’50s agribusiness, leading to empty calories, subsidy checks and the bespoiling of the earth. But the state also supports a significant collection of innovative small programs designed to help bring new life and health to family farming. Sounds like the front lines to me. His name is Tom Vilsack, but I like to call him Vlasick, like the pickle he’s been in. Let’s hope he’s fair-minded and smart, and let’s send our (intelligent, well-researched) suggestions to him.

All of this got me to thinking beyond our chorus of seasonal, locavoracious personal cheerleading about what might be good ways for us to focus our energies during these next critical months.

After all, if the great Golden State can lead the way in land preservation, emission controls and living wage practices, why can’t we do the same, not just sporadically and locally, with national food and farming? Granted, we do a lot that’s innovative and fresh, and we certainly lead stylistically and organically in all senses of the word but clearly, we could do oh so much more.

In many ways, central California is the new Middle West. It’s where big business and federal financing—not to mention state- and region-supported irrigation—meet the American market basket. It’s where huge, tasteless broccoli bumps up against old, organic walnut trees, both a source of sustenance and success.

I won’t go into why some smart people feel that the actual Midwest is all but lost to them. What I will say is that the big difference for us is that California’s Central Valley is right down the road, filled with colleagues and neighbors, family and friends with whom we can talk and work and engage. We can help each other in so many real and immediate ways that it seems timely and prudent to focus some major time and energy on being local and regional, then going national—just as we do when we go shopping.

So here is my list for 2009 and beyond, designed to get a better dinner on the table, at home, around the corner, up and down the state and across the nation. Then we can talk about feeding—and better feeding—the world.

• Grow food. Out back, in a pot, on the windowsill. We can and must be personally connected to our food. It’s delicious and often practically free.
• Help with other gardens. School gardens, community gardens or your local town’s victory garden.
• Join community supported agriculture efforts. Try it once. Go in with friends. Invite neighbors. Learn the joys of kale and cardoons.
• Shop at your local farmers market. I know I don’t need to tell most people that, but it’s the year-rounders that need the most support. Buy something in February. Visit other ones nearby. Take the kids. Make it an adventure.
• Travel inland. Sacramento, Temecula, Livermore, Chico—there are wonderful farms there. This is certainly not the year for that trip to Paris or Barcelona, but we can certainly expand our horizons by exploring areas we take too much for granted.
• Get involved! Sign a petition. Write a letter, send an email. But before you do, read a lot and do your homework. It’s what we’re wanting from our leaders on a lot of levels.

Isn’t it nice that sound thinking, common sense and developed intelligence are back in fashion? Gobama!

Clark Wolf is the president of the Clark Wolf Company, specializing in food, restaurant and hospitality consulting and author of the recently published book, American Cheeses.