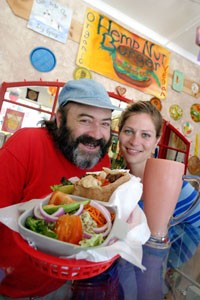 Who cares? At Chai BaBa Chai and Govinda’s, we’re dining out vegetarian!

One of my constant gripes about dining out is that there are never enough vegetables, and ironically enough, this seems to be particularly the case with vegetarian entrées, whose persuasions run deeply in the carbs-with-cheese realm–risotto, macaroni and cheese, burritos bursting with about 12 pounds of rice. It’s very dismal, which is one of the reasons I save my part-time vegetarianism for home, where I can make an entire meal of green beans.

Two places have opened in the past few months to offer gatherers-not-hunters more dining options than pasta or veggie burgers. Now vegetarians and day-tripping carnivores alike can scoot over to Chai BaBa Chai’s, which sits at the tail end of Sebastopol Road, right where Highway 101 and the mall cut off easy access to the South A Street neighborhood. Because of that relative isolation, it’s a very charming corner of town–the neighborhood that time forgot. There’s a funky consignment shop, a salon, a stylish furniture store, a great gallery, and hardly any traffic at all.

Chai BaBa Chai’s fits very snugly into the neighborhood’s spirit. It’s an eclectically decorated, colorful space, small enough to call a hole in the wall. There are some tables outside, a few tables inside, and two seats at a counter cramped with flyers for all sorts of New Agey services.

The menu is posted up on the right as you walk in, listing a fairly Mediterranean selection of what Chai BaBa Chai’s has dubbed “vegan fast food.” It’s definitely vegan, though I dunno about fast. Chai BaBa Chai isn’t slow, in any case, and besides, what’s the hurry? The staff is friendly, and it’s a great place to hang out, especially on a summer afternoon outside with an iced chai and a good book.

The food, made mostly from organic ingredients, is rather hit-and-miss but overall tasty enough to warrant multiple–and perhaps regular–visits. I stopped in for a Love Burger ($5.50) of lentils, brown rice, shiitake mushrooms, hempnut, and a million other wholesome ingredients that make a patty so moist it’s prone to falling apart.

The burger comes with avocado, lettuce, pickles, tomatoes, and a very tasty spicy-sweet-tart secret sauce (which isn’t so secret, since Chai BaBa Chai’s has the ingredients to everything posted up on the wall). As you eat a Love Burger, the sauce drips all over your hands, making a total mess, like a good burger should. I was so into it that I wound up getting another one on my second visit and never was able to check out the pesto pizza or hummus wrap.

You can get a Love Burger with a side salad or oven-roasted potatoes that approximate fries ($6.50, in that case). The potatoes are a great concept–thick wedges tossed with herbs, and roasted until they turn brown and crisp on the edges–but the ones I received were barely warm, and the insides were still slightly raw. Perhaps I just got a bad batch.

The potatoes come with three dipping sauces, so you get to set up your own little sauce smorgasbord, which is very fun. The spicy ketchup was more like cocktail sauce; the sweet mustard was pungent; and the lemon aioli (at least that’s what the menu said it was) had a curry taste going on.

I also tried a falafel pita ($5.50). Depending on whom you talk to, falafel is either classic Middle Eastern street food or classic vegetarian hippy food; this was more the latter. The fried chickpea patties were tasty and crunchy, though the accompanying chunks of cucumber lining the pita were less sandwich-friendly than slices. I’d have preferred more sesame tahini dressing and less hummus (falafel is already made from chickpeas–why garnish chickpeas with more chickpeas?).

And about that hummus . . . Each time I went in, I was presented with a small cup of silky red-pepper hummus that was good enough to lick from a spoon–or a finger, like I did–after the celery and carrot sticks ran out (the carrots were unpeeled, but somehow I didn’t mind). Likewise, the side salad of tabouli that came with my pita was welcomingly delicate, the bulgur wheat fine-grained and the dressing understated.

The beverage offerings are at least as extensive as the food menu, if you take into consideration that you have a choice of soy, almond, or rice milk, and black, green, or decaf teas, as well as yerba maté. That’s not even counting the juice drinks. I wound up playing around with all of the chai options and hardly made a dent in the menu.

Since it’s pushing into the mid 90s in the afternoons these days, I’d recommend having a nice iced drink–plus the ice dilutes the chai, and that stuff is ridiculously sweet. Chai BaBa Chai simply has the best chai around, hands down. Drinking this stuff makes me ashamed of the concoctions I’ve brewed at home and tried to pass off as chai. Some things are worth going straight to the source.

Govinda’s Restaurant, in the Bennett Valley Shopping Center in Bistro Allure’s former digs, is vegetarian, like Chai BaBa Chai. But the two places are otherwise very different in tone, mostly because Govinda’s is a buffet. I live very close to a Sizzler, and on Sundays, you see huge people lumbering out of their cars to fill up their plates with the endless sizzlin’ bounty.

Sizzler and Govinda’s may have a buffet and the euphemistic “all you care to eat” line in common, but Govinda’s is so much more than a Sizzler minus the meat. It’s a spacious, calm place whose walls are lined with framed pictures of Krishna. Add the softly playing world music in the background, and it’s a very soothing, if minimal, spot.

Here’s the drill: You go in, pay a flat $6.75 fee for lunch and $8 for dinner (soup and salad or bread and salad-only prices are available, too). Then you stock up your cafeteria tray and make tracks to the steam tables.

There’s not a crazy-huge amount of food at Govinda’s like at other buffets, which is nice, because when you see hotel pans laden with every side dish under the sun, stretching out endlessly into the horizon, it gets overwhelming. Chef and owner Alvin Marsden changes up the fare a bit daily, but there are two soups, a few breads, some hot entrées, steamed vegetables, and a pretty standard salad bar.

Left to my own devices, I have pretty strange eating habits. Everyone does, I suppose, and the freedom of a buffet allows you to indulge those. So I made up a green salad with shredded carrots and beets and topped it with a very good tofu-dill dressing. Then I slopped Alfredo sauce on top of my bread, in addition to the plain tricolored fusilli pasta. The Alfredo sauce was all right–it reminded me of what you’d find jarred in the grocery store. I liked it better on the slightly sweet, soft whole-grain bread.

The buffet had two types of rice–basmati and brown–to go with a very mild vegetable curry of spinach, potatoes, and tomatoes dotted with cumin and brown mustard seeds. What with the pasta, the bread, the rice, and the potatoes from the curry, you can enjoy four different forms of carbohydrates in one sitting–another unique feature of buffets.

The red lentil dal soup was disappointingly thin, as if it had been watered down, but its residue in the bowl leant a pleasing kick when I refilled it with creamy broccoli soup (yes, I know, the law states you need to get a new bowl each time you return). My favorite part of the meal was halvah, a sweet East Indian pudding of steamed cream of wheat that’s totally different from the sesame candy of the same name. Dense but fluffy at the same time and packing a gingery punch, the halvah added a fifth carb to the meal but was worth it.

I left a little too full, but feeling properly nourished and not in wont of vegetables. That’s the way I like it.