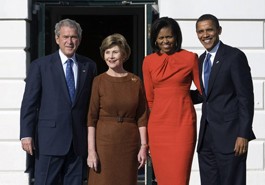 What do people in the North Bay expect of Barack Obama?

OUT WITH THE OLD: The president-elect and Mrs. Obama met with President and Mrs. Bush on Nov. 10 to get their first look at their new digs.

When Barack Obama is inaugurated as the 44th president of the United States of America, he does so in the role of steward to the millions of hopes of a fractured nation. The Bohemian asked a wide swath of people in the North Bay, from community leaders to bluecollar workers to the homeless, the same question: What are your expectations for Barack Obama as president?

The Rev. James Coffee, Community Baptist Church “My greatest hope would be that he will be able to be different and unique, and listen to more of the common man, the people he represents. Not just the powerful people. I expect him to bring this war, at least in Iraq, to a close. And my hope is that he’d be able to work on a universal basis to the universal problems, like the disinherited people in every country, especially with jobs, and the way people are one paycheck away from being homeless. These are the things he ran on, and what the people voted him for. And I hope he’d be inclusive, bring more diversity into the government. Especially including women.”

John Ash, chef “With so many issues on the table, the economic one being the most pressing, my hope for his presidency in the near term is that he and his team can prioritize their activities and not get caught up in trying to be and do all things for all people. I’d love to see a ‘hit list’ of issues published right after he takes office. We’ll then be able to measure progress and it could help him to focus.”

Jill Techel, mayor of Napa “As mayor, my hope is that he continues to support and, in fact, invest more in infrastructure projects for our community, and that we see the funding for the flood-control project increased so we can get it completed.”

Bruno Ferrandis, conductor, Santa Rosa Symphony “From an artist’s point of view, Barack Obama will have to prove that he is interested in arts emancipation in the U.S., starting with music education at school and in the near future study the European approach about art. Finally, the great majority of Europeans (like me) wanted to see a change in American politics; now a vast majority of Europeans want to see it in the arts.”

Rick Dean, executive director, Face to Face “Working in the public healthcare system for the past 20 years, I’m hopeful that the new administration will generate real change in the way we treat people who are sick, without health insurance and isolated from quality care. This includes the 1.1 million men, women and children living with HIV-AIDS across the nation.”

Ky Boyd, owner, Rialto Cinemas “I hope that thoughtful, compassionate leadership will bring about change that benefits Americans at every level and in every part of our great nation. Change that puts people, food, shelter, education, affordable healthcare and the arts ahead of corporate profits and pork barrel politics. Change that restores our country’s reputation around the world. . . . And as a gay American, I hope that President Obama will stand up for the rights of all minorities, including LGBT Americans, by ending policies such as ‘don’t ask, don’t tell,’ and take a leadership role on the issue of gay marriage. Change is in the incremental steps forward. I don’t expect a miracle, but I hope for progress as we journey forward as a nation.”

Joseph Von Mertam, homeless “I’m expecting all the money he’s got. If he wants to send me over a bunch of money, that’s cool with me. I know damn well he’s gonna change things for the better. And then he can give me a hunk of money.”

Charlie Musselwhite, blues musician “I feel like Obama will restore America’s dignity. He’ll put America back on track, back on the high and honorable road. The eight years of Bush have been like a return to the Dark Ages, and now somebody has opened a window and let in the light and fresh air. I hope that with the coming light of the Obama presidency, the people that need to will wake up and realize how they were bamboozled by Bush and learn from what happened to them.”

Shawn McConlogue, barber, the Barber Shop “I expect it’s gonna get worse before it gets better. He’s got a big hill to climb, but so far he’s picked a lot of smart people. He seems like a very smart, competent guy, so if there’s anyone to help us out if it, it’s him. I think we’re definitely gonna see a shift from Iraq to Afghanistan, and I think we’re gonna see something very similar to FDR’s Public Works program.”

Old Man, getting his hair cut, interjecting “That’s what we need! All these young people out of work with no direction, put ’em in the CCC. I’m a child of the Depression, and it worked for us then. It’s what we need now. He can’t be any worse than the last eight years.”

Man, nearby, waiting in a chair “I think he’s gonna get all different races working together like never before.”

F. Scott Chilcott, MD “It certainly would be nice to see if we could be incredibly more efficient in our dispensing of medical care in this country, because we do a terrible job. There’s so much wastefulness going on here, and one of the very big factors is the legal profession making everybody so antsy. You end up getting an awful lot of unnecessary and redundant things that are expensive and sometimes hazardous only so you won’t get sued. The lawyers have an incredible influence on how medicine gets practiced. So I would expect him to help, but in terms of saying that I’m going to be frantically, disastrously angry and think he’s an evil rotten SOB if he doesn’t do it, again, I find myself being very careful about my expectations.”

Robert Pixton, air tanker pilot, Cal Fire “I didn’t vote for him, so maybe I’m not the right person to ask. Obama’s got a tiger by the tail, there’s no doubt about it. Especially with the latest escalation, the war over in the Gaza Strip—it’s not going to be an easy one. But every president, when they first take over, they have some major crisis they have to deal with. I always think, ‘OK, how would somebody else have handled it?’ You know? We’ll see.”

Tom Gaffey, house manager, Phoenix Theater “You know, it’s not what I expect of Barack Obama, but what I expect from the American people, to give this man a chance to do the job. But, oh man, do I expect he’s going to come and solve the economic problems? How could I possibly expect that? I hope he can. Do I expect he’ll have the right answers in Afghanistan and Iraq? I can’t expect that. But I hope he does. It’s just a lot of hope and very few expectations, and such a huge hope for a third party. I will vote for any third party that looks like they have a chance.”

Joe Carr, refrigerator repairman, A-1 Refrigeration “If nothing else, at least the rest of the world knows that we see them. Most of the people in the world are of color; many of the people in the world are Muslim. And we elect a man named Barack Hussein Obama? To let the rest of the world know that we don’t have this single-minded, ‘we’re right’ attitude, with our middle-aged white leaders all the time—that alone is going to speak volumes about who we are.”

Henry Rollins to SSU Grads: “War and torture will be relics...