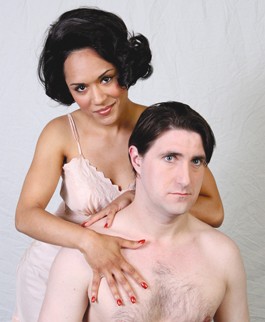 Cat on a Hot Tin Roof is, without a doubt, one of the greatest plays ever written by an American playwright. Its characters—the grandly dying Big Daddy, the self-hating alcoholic Brick, the sexy-fierce Maggie the Cat—were already stage icons before they were respectively stamped onto the conscious of the country by Burl Ives, Paul Newman and Elizabeth Taylor in the 1958 film. These are the kinds of characters that actors dream of playing, so it’s no surprise that the show is often used by drama schools and theatrical training programs. One can’t help but grow as an actor when faced with the massive challenge that is Cat on a Hot Tin Roof.

But make no mistake: this is not a play that works without a cast at the absolute top of its game. As beautifully written as Williams’ text is (“Life has to go on when the dream of life is over!”), this dialogue does not sing itself. For Cat to work, the actors must find all the right notes and play them with pitch-perfect authenticity. This, after all, is a play about “mendacity,” Brick’s oft-stated reason for drinking so much. It is Williams’ exploration of the ways that lies, both small and large, undermine the human condition. There can be no false notes in a production of Cat, or the whole show crumbles.

Summer Repertory Theater’s current production, part of its annual five-show season, is an unfortunately good example of this crumbling. Directed by James Newman with the laudable goal of shaking up and challenging its audience’s expectations, the production fails due to its inconsistent grasp of authenticity, beginning with the casting of Grace Gealey as Maggie. Normally a proponent of color-blind casting, I kept waiting for Newman’s direction to reveal some defensible reason for showing an African-American Maggie in a rocky marriage to Brick (David Hayden), the son of a white plantation owner. Set in 1954 in Mississippi, in the very heart of the KKK’s stomping grounds, it isn’t enough to merely ask the audience to overlook the fact that Maggie is black, since the racism and intolerance of the era, time and place are so deeply seared into our minds. The result is that the choice of Gealey is distracting and inherently false—a major fault in a play about falseness. A knockout performance might have been reason enough, but Gealey, who demonstrated herself to be a fine and agile actress with her delightful shape-shifting work on The Wedding Singer (reviewed here last week), doesn’t bring enough fire to the part of Maggie for the show to work. Though natural enough in her otherwise fluid performance, Gealey falls short of delivering the calculating, deeply feeling force of nature that is Maggie the Cat. She’s more Maggie the Kitten.

As the self-destructive Brick, Hayden also falls significantly short of the mark. We should be able to see the pain and self-imposed shame, the underlying homophobia, that has driven Brick to sit in silence, drinking until he hears that click that allows him some peace of mind. But Hayden only sits and stares blankly, as if he were trying to remember something that isn’t that interesting anyway. To make things worse, his idea of inebriation is bizarre; after something like 15 drinks guzzled in the course of what’s supposed to be a three or four hours, a mortal man would be slurring and stumbling, if not dead. Hayden, instead, just looks a little tired, as if worn out form all that passive staring.

Tim Hayes, as the imposing Big Daddy, fares better, but he falls victim to the show’s lackadaisical pace. Set during one night, as the members of Big Daddy’s family celebrate his birthday while secretly maneuvering to inherit his estate when he dies, the show should have a building intensity that is ratcheted up with each new verbal conflict. The pace set by Newman instead is meandering, more like watching an ice cube slowly melt in one of Brick’s numerous highballs.

Programs like SRT are vital in the development of actors and theater professionals, but with plays as exalted as this, it is not enough to simply go through the paces. The audience deserves a Cat that puts as much heat on the stage as Williams put in he script, at least as much heat as there is up there on that imaginary tin roof.