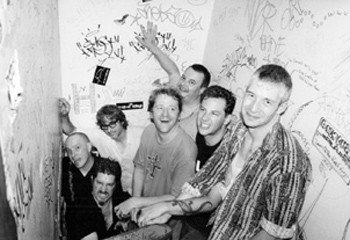 Fast forward to 2003. “Take the Skinheads Bowling” is the theme song to filmmaker Michael Moore’s Oscar-winning documentary Bowling for Columbine. The song blares over the film’s opening credits and gets the royal treatment when Academy Award music director Bill Conte strikes it up just before Moore takes the stage for his controversial acceptance-speech-turned-antiwar-rant.

Today, Camper Van Beethoven are in the midst of a bona fide reunion. Overlapping members with the commercially successful group Cracker, original CVB members reunited three years ago as Cracker’s opening act, some performing in both sets. The band are back in the studio recording their first album of new material since 1989’s swan song Key Lime Pie. Last week, the SpinArt label reissued four of the band’s albums, all digitally remastered with bonus tracks. They make an in-store appearance on Monday, May 10, at the Last Record Store in Santa Rosa, performing a free concert there, and pair up with Cracker on May 15 for Camper Van Beethoven’s 21st birthday party at the Warfield Theatre in San Francisco.

“This new recording project gathered momentum as we got back in the groove of things at our recent gigs,” explains David Lowery, the Camper Van Beethoven founder and frontman who also heads up Cracker. “We decided to make the new record because we finally got a good batch of songs that really fit our character and legacy.”

Part of that legacy is the band’s musical high-wire act that helped set the standard for the adventurous alt-rock spirit. “Camper Van Beethoven always was eclectic and managed to pull it off most of the time” says the 43-year-old Lowery, a Texas native who formed the band in 1983 after moving to Santa Cruz and connecting with violinist Jonathan Segel and other local musicians. “At least we pulled it off right up to the point where we overextended ourselves. But we always took risks, always liked incorporating some different style and bringing it into the rock fold. We were willing to get in over our heads.”

These days, it’s popular for music critics to maintain that Camper Van Beethoven’s self-described “surrealist absurdist folk” never got the respect it was due as indie-rock pioneers.

“People did write nice things about us after the band broke up,” says Lowery, dismissing the band’s underdog status. “We were included in books as one of the founding alternative-rock bands, so I think we do get respect. Still, at the time that we were starting the band and first putting out albums, there was a tendency, especially on the East Coast, to see us as a novelty band. And we weren’t really that. Sure, there were some songs that we did that could have been covered by [1980s jokester punk-pop band] the Dead Milkmen, but we did a lot more than that.”

Lowery describes the upcoming CD as “a concept record in the grand tradition of the ’70s classic-rock and prog-rock traditions.

“Ultimately, we just naturally find where we need to play it musically.”

Penelope Houston with Pat Johnson, ‘The Pale Green Girl’ (DBK Works)
The Avengers, ‘The American in Me’ (DBK Works)

As lead singer of the seminal San Francisco punk band the Avengers, Penelope Houston blazed a path for Liz Phair, Courtney Love and a generation of female punk singers. The Pale Green Girl, with songs by Pat Johnson, is Houston’s seventh solo album. The conceit is a faux French film soundtrack of sorts that casts Houston’s gentle soprano against tragic lyrics and haunting melodies reminiscent of Marianne Faithfull’s recent albums. It’s arguably Houston’s best work. For those who yearn for the fire of the Avengers, the band that opened the Sex Pistols’ last concert, The American in Me offers a dozen previously unreleased studio and live tracks recorded in 1978 and 1979. You get to hear not only Houston and her adolescent angst, but also bassist Jimmy Wilsey, who went on to fame as the twangy guitar master with Chris Isaak and the Silvertones.