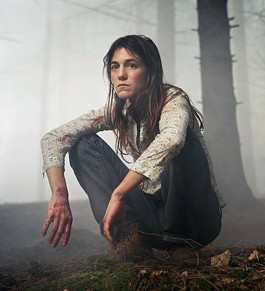 The most prestigious gross-out since Irreversible, Lars von Trier’s Antichrist is billed as a director’s return to instinctive filmmaking. Von Trier’s “Your guess is as good as mine” approach includes comments such as “I let this film flow to me instead of thinking it up.”

This might be the best way to take in Antichrist, as a triple-X shocker, giving it merit for its fussy surfaces and its unquestionable power to disgust. And when von Trier (Breaking the Waves, etc.) describes Antichrist as a way back after two years of crippling depression, it seems even more critic-proof. Slamming it would be like mocking some mental patient’s art-therapy project.

Calling Antichrist “misogynist” isn’t fair. The man in the story (called only “He,” played by Willem Dafoe) is a platitudinous artist when he’s not being a meat-pestle. And the beastliness in the woman (called “She”) is a response to his power plays, his pretenses of being learned and in control.

A truly misogynist film echoes Freud’s guess that women don’t know what they want. She (Charlotte Gainsbourg) does know. First, she wants her man; second, she wants to fuck the pain away. Von Trier gives women their due as forces of nature, even from a superstitious peasant angle: are they sorceresses, then, since they can create life? (Did von Trier cast Gainsbourg because of her resemblance to Margaret Hamilton, the Wicked Witch of the West?)

As for Antichrist‘s spine as a horror film, no excuse is needed. It’s about the heebie-jeebies caused by nature. She and He are seen at the beginning, sexing it up vigorously in ultra-slow-motion. Their toddler ambles in, leers at the primal scene and then apparently kills himself. She falls into a big orgasm just as her child falls out the window. The dead child is named, significantly “Nick”; one clue (and we get another) that this was the young antichrist awaiting some fearful resurrection.

She stews in her own depression in a claustrophobic apartment. He decides to take up the role of grief therapist to his mate. He is apparently a psychologist, but we don’t know that for sure: all we know is that He is not a doctor. The couple moves to their cabin in a dank forest. It looks troll-haunted, with white slashes of birch trees glowing in the gloom.

She hadn’t wanted to come back. She had been holed up in the cabin, working on her women’s-study thesis about the history of crimes against women. He had called it glib. The cabin is named, surely euphemistically, “Eden.” The plot is a reversal on Genesis. Seemingly, the sex act took this unhappy couple back to Eden, where they are to be punished by nature and each other.

Her desire for sex grows. Visions of diseased, supernatural animals torment the man, which include a ludicrous, rotting talking fox, whose two-word growl, “Chaos reigns,” could be the title of the next Spinal Tap album. Things having got as sexual as they can, terrible violence breaks out.

For no good reason, von Trier marks his film out with episodes—is there a better way to shake an audience out of a mood of horror? But are we supposed to be horrified, or are we supposed to think of this as an intellectual exercise with nut-busting and mutilation? Von Trier comes up with downy, glossy images and then frames them, freezes them down.

Von Trier’s beefing against the fecundity of nature, signified by the pelting of acorns on “Eden’s” roof, can’t be taken seriously. It’s like describing that scene in The Wizard of Oz where the trees throw their apples as a symbol of nature against man. We get so many movies made by people who seemed never to have set foot outside of a movie theater, and von Trier is just another one; thanks to digitizing, this wilderness is really as composed as an English country garden. The thesis could use an argument: such as William Blake’s line that “the lust of the goat is the glory of God.”

What makes Antichrist so frustrating is that it has effective horror moments, such as the Lovecraftian passage of He discovering three new constellations in the night sky. David Lynch has had more success in filming this dream-journal-type material and making it terrifying. When von Trier mentions that Antichrist inspiration came from August Strindberg, he lets us know why this film looks overcooked even if it was underanalyzed.