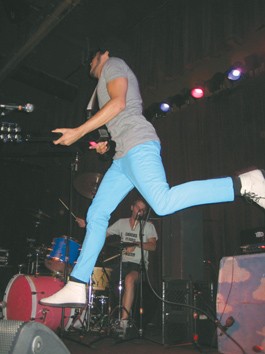 The votes are in!

Last Wednesday, Oct. 21, at Hopmonk Tavern in Sebastopol, the envelopes were ripped, the gold record awards distributed, and we announced the winners of the fifth annual North Bay Music Awards.

Thanks to all who came out to the Hopmonk Tavern and made it such a sweet evening, and thanks especially to the George Marsh Quartet, Arann Harris and the Greenstring Farm Band and Body or Brain (whose lead singer Jakey Lee is seen leaping up) for playing; to Noah D for keeping it live on the turntables; to Ricky Watts for doing live painting and helping raise hundreds of dollars for Face to Face and Food for Thought; to Brian Griffith and Bill Bowker from the KRSH 95.9-FM for presenting; and to the Hopmonk itself for having us back for another great year.

This year, we had over 2,000 people vote in categories that were sometimes very, very close. We’re lucky to have such a wealth of talent in the North Bay, and we salute everyone—winners, nominees and non-nominees all—who continue to enrich the breeding ground of excellent music in the area.

Winner: At All Costs

I Don’t Think This Guy Is Kidding