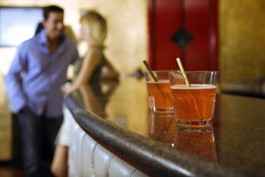 The search for a tonic that will raise his magic wand or swell her libidinous hunger has spanned the centuries, spawning the word “aphrodisiac,” a derivation of Aphrodite, the Greek goddess of love, sex and beauty. The sexually arousing qualities of oysters, chocolate, Spanish fly and powdered rhino horns have long been exulted by cultures worldwide. In ancient China, eating human genitals, semen and even menstrual blood were all believed to increase sexual ability. A quick look in the spam box confirms that a vast variety of modern-day cures have joined the list, amounting to a billion-dollar business. Viagra alone sells for roughly $8 per tablet, even though it only has a 70 percent success rate. But what of anti-aphrodisiacs, those items that have the opposite affect?

When a prominent San Francisco&–based ob-gyn is asked about the biggest buzz kill she deals with in her practice, she laughs, “Two kids and a mortgage—it works for all my patients, guaranteed! Stress, responsibility and lack of time—they’re all so destructive to libido in our culture. Try working full-time, having kids and running a household. There’s no time or energy left over.”

She continues, “While stress destroys women’s libido, it seems to increase men’s. A driven man is turned on by stress and power, but women don’t respond that way. Hormones have a lot to do with it. Testosterone, the primary libido producer, boosts the sex drives of both men and women, while estrogens have the opposite effect.”

And so it follows that ingestibles that cause a drop in testosterone will cause a droop in the action. While this may be a good thing for parents of hyperhormonal teenagers or as treatment for sex offenders, most folks don’t want to lose that lovin’ feeling too quickly. It’s best to avoid buzz kills, or use them in moderation when possible.

American’s most commonly ingested anti-aphrodisiacs are alcohol and cigarettes. Both decrease testosterone production and are highly addictive. (It kind of makes you wonder how bars became the singles’ widespread place of choice to meet and mate, considering the high consumption rate of both in these venues.)

And don’t rely on Kellogg’s Corn Flakes for healthier eating. J. H. Kellogg originally promoted his cereal as an anaphrodisiac. He wrote a book of moral codes, Plain Facts for Old and Young, in which he spoke of the need to “quell the beast within” and to restrict one’s desires.

Other buzz kills fall under the category of bad odor producers. No doubt there are BO, bad breath and fart fetishists, but it’s probably safe to exclude the general population from such fetid forms of enjoyment. Red meat, especially when eaten in conjunction with a diet low in vegetables and fiber, may stagnate and putrefy in the digestive tract, causing terrible gaseous odors. Eggs, fish and liver contain chlorine, often resulting in fishy and sulfurous smells post-digestion. Oral bacteria also feast on anaerobic proteins such as red meat and fish, producing the waste products that cause halitosis.

And the “musical fruit” of children’s rhymes—beans (and legumes)—are notorious gas producers. While the song promises that “the more you eat the better you feel,” no doubt your date will wish you hadn’t ordered that super-burrito. Processed foods, heavy in sugar, refined white flour, rancid fats and hydrogenated oils can be responsible for highly objectionable BO. Think Homer Simpson and his interminable intake of doughnuts, if a visual turn-off is needed.

Even though “a picture of your mother” (as one blogger responding to the question “What is an anti-aphrodisiac?” answered) may instantly kill any libidinous thoughts, mom still looms large in the good advice department. A diet high in veggies and low in fat, moderate in alcohol intake, no ciggies and lots of exercise will keep the buzz going longer than the Energizer Bunny. Maybe not what mom had in mind, but that’s probably how you got here in the first place.

Alcohol As Ogden Nash noted, “Candy is dandy but liquor is quicker,” but the juice popularly used to loosen inhibitions is actually the number one cause of libido loss. Numerous scientific studies conclude that alcohol diminishes arousal and makes it more difficult for both women and men to climax. And here’s a twofer: quinine, widely used in tonic water, is toxic to the testicles, reduces sperm production and decreases testosterone. So if you’re looking for some action, lay off the gin and tonics, or you may go down like the British Empire.

Cigarettes The primary active ingredient in cigarettes, nicotine, decreases sexual libido. Plus, cigarettes yellow the teeth and skin, and make the breath taste like a used ashtray, hardly a conducive way to set the mood. And we are all well aware that they kill far more than the buzz. Furthermore, forget trying to hide the odor with breath mints or toothpaste. In large doses, spearmint and peppermint reduce testosterone levels and cool the heat.

Black Licorice Licorice root extract, which is used to flavor a wide variety of products such as candies, liqueurs (think Schnapps), soft drinks, herbal teas, medicines and ice cream, contains ingredients that impede the production of testosterone. Considerable amounts of licorice are used to flavor and sweeten the taste of tobacco with a woody flavor. The New England Journal of Medicine recently published a study concluding that components in licorice suppress the sex drive, partly due to their estrogenic content. Why not market this to teens—or to parents, who can slip it into their offspring’s diet? Twenty-five grams—less than an ounce—are cheap, and offer strong anti-aphrodisiacal effects when ingested.

Tofu and other soy products Soy products contain high amounts of isoflavonoids, which mimic the effects of estrogen. It is conjectured that the Buddhist monks in China and elsewhere consumed much of it in order to inhibit their libidinous tendencies and keep them focused on the straight and narrow path to nirvana. Many cooks use garlic and onions to enhance the bland taste of tofu, and garlic breath hinders hooking up with that special someone. But garlic has been considered an aphrodisiac since the days of the ancient Greeks. A 2005 study has proven it a vasodilator, sending blood into the appendage in need of a stiff drink. It’s best to use an alternate seasoning if inaction is the aim.