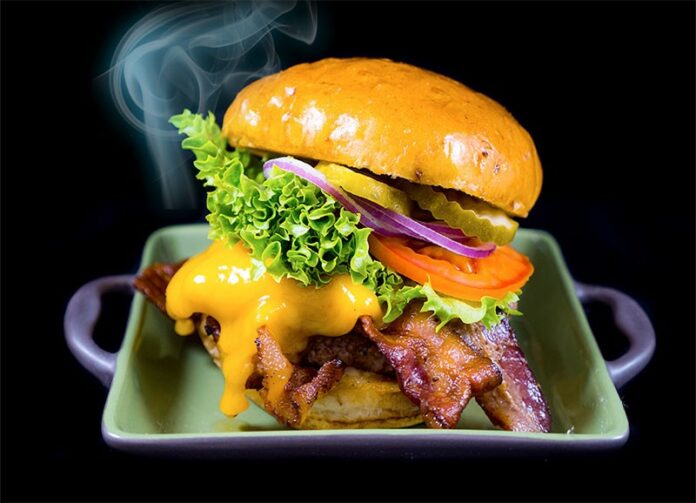 It’s risky to open a burger joint. I mean, aren’t there enough already?

When Sonu Chandi purchased Flipside Burgers and Wings on Third Street in Santa Rosa late last year, he gambled on locals’ appetite for meat patties and buns. His new place, Bibi’s Burger Bar, doesn’t look a whole lot different from the former occupant, but so far so good. It’s got a retro-cool vibe with clean lines and plush booth seating. And the burgers are good.

The place serves an extensive variety of burgers and seems to be drawing an appreciative crowd. And it succeeds on its simplicity: burgers, sandwiches, a few salads, soups, nachos, fat, crisp fries and thick milkshakes. There’s a full bar, too, so if you want bourbon in your shake, you can get it.

At $11–$13, the burgers are a step above fast food in price, quality and variety. Classicist that I am, I tried the Classic Bacon Cheeseburger ($11). It’s just what it says it is. It wasn’t quite medium rare as I requested, but was still a very respectable, plump burger. If you want something less traditional, there are variations like the Thai burger with chile-lemon grass slaw and lime mayo ($11) and the Cabernet burger ($13), layered with Carmody cheese, a portobello mushroom, horseradish sour cream and whole-grain mustard. Too bad there’s not a grassfed-beef option.

Chandi co-owns Stout Brothers Irish Pub & Restaurant in Santa Rosa and six North Bay Mountain Mike’s pizza franchises. He’s also opening Craft 535 Kitchen & Bar on Fourth Street, the location of the former restaurant Portofino. That was supposed to open in January, but like every restaurant project, it’s taking much longer than planned to open. While you wait for that, wander over to Bibi’s for a burger. 630 Third St., Santa Rosa. 707.523.1400.