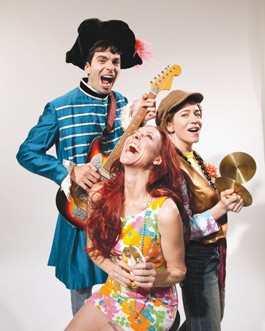 There is no escape from Shakespeare. But why should there be? In the North Bay, Shakespeare is an escape, a way to detach ourselves and place our focus on something as different from everyday life as possible, something full of drama and vision and magic and beauty. How else to explain the vast number of theater companies offering the works of Shakespeare all over these three counties every single summer?

Most regions of this size are lucky to see one or two of wild Willy’s plays. In the North Bay, it’s hard to keep track of all of them. Even with the apparent demise of North Bay Shakespeare (aka Shakespeare at Stinson), even with Windsor’s Shakespeare on the Green having concluded its offerings for the year, even with the Sebastopol Shakespeare Festival having just completed its hugely successful open-air run of A Midsummer Night’s Dream (with its one non-Shakespeare offering, The Three Musketeers, still to come), there are numerous Shakespearean extravaganzas still on the boards or waiting in the wings.

In San Rafael, where the Forest Meadows Amphitheatre reigns as the most enchanting and secluded venue for Shakespeare in the North Bay, the Marin Shakespeare Company has been delighting fun seekers and offending purists with its ’60s-era musical adaptation of Twelfth Night, here subtitled All You Need Is Love. Adapted and directed by Lesley and Robert Currier, Shakespeare’s tale of love, mistaken identity, cross-dressing and practical joking has been frosted over with tasty songs from the Summer of Love, borrowing from the Beatles, Bob Dylan, Donovan and others. The show runs weekends through Sept. 27.

On Aug. 21, the company adds a traditional staging of the epic Julius Caesar, featuring Barry Kraft in the title role and television actor Jay Karnes (The Shield) as the conflicted conspirator Brutus. Julius Caesar runs through Sept. 27. 50 Acacia Ave., on the Dominican University of California campus, San Rafael. 415.499.4488. www.marinshakespeare.org.

Santa Rosa’s Narrow Way Stage Company has established itself as being fearlessly eager to present the Bard in unexpected, subversively political ways, and is about to launch a double shot of Shakespeare with two shows in repertory. First out of the gate is a Wild West, post&–Civil War staging of the intense drama Coriolanus. Notable as one of the best Shakespearean plays that no one ever produces, Coriolanus follows the tragic trajectory of a Roman warrior, here re-imagined as a returning Yankee war hero, whose pride, unfamiliarity with politics and extremely meddlesome mother result in his banishment and doom. The show, directed by Merlyn Sell, will be presented in the outdoor courtyard of the Glaser Center on Aug. 6&–9, 14, 16, 20 and 22.

Running side by side with Coriolanus is Twelfth Night (yep, that’s two productions of TN in the North Bay!), with heightened emphasis placed on the play’s physical comedy and pent-up sexual tension. Directed by Nick Christenson, Twelfth Night runs Aug. 13, 15, 21, 23 and 27&–30. Glaser Center, 547 Mendocino Ave., Santa Rosa. For information and tickets, visit the website, www.narrowwaystage.com.