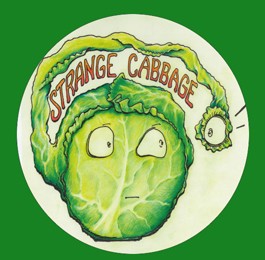 S trange Cabbage are in their own little world—the Sonoma County eclectic rock band’s fans are known as “Cabbageheads,” and each member of the band has a name involving the vegetable: the bassist is Cabbage Loco, singer-guitarist is Professor Cabbage (a respected local philosophy teacher), Fuzzy Cabbage is on drums, Uncle Cabbage on guitar and Country Cabbage on vocals. They describe their music as the “Cabbage sound,” and, of course, their north Santa Rosa rehearsal studio is the “Cabbage Patch.” They appear Dec. 8 at the Black Cat.

In the grand tradition of the joke band that simultaneously mocks and pays homage to the absurdities of rock music, the Cabbage don’t take things too seriously, while also penning evocative songs that don’t hide behind the safety of fashionable PC culture. Song titles like “Love Stain,” “Rasta Bartender,” “Old Hairy” and “Please Don’t Be Offended” are indicative of a band doing things their own way; their website carries a Parental Advisory and a button to push agreeing you are 18 or over to hear song clips.

Along the lines of Ween and Tenacious D (who the band agree are influences), there is a pleasant unpredictability to Strange Cabbage—one song’s goofy and sardonic, the next is serious. “We’re not out to blow anyone away, but most people seem intrigued by our satirical edge,” Professor Cabbage explains. The Cabbage sound is upbeat, funny, groovy, stylistically diverse and down-to-earth. Everyday objects are puzzling, enigmatic, bizarre—if looked at in the right light. Which is all Strange Cabbage are asking you to do.