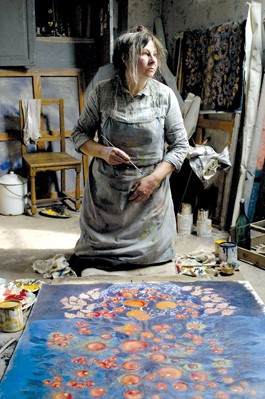 
The date and location give us a clue: “1914, Senlis.” The year is the beginning of the modern era by anyone’s calculation—the first year of the Great War, which broke out that autumn. But then there’s “Senlis.” Where in the world is Senlis?

The haunting biopic Séraphine takes us there, to a silent, small French village, with a full moon caught in the tree limbs and a lumpy, even troglodytic woman stirring the water of a creek with her hands. This woman clops up to pray in a stone church. It’s shot at a low angle so that the heavily leafed shade trees around the church seem to be growing into the stones, like the jungle vines into the towers of Angkor Wat.

The impression at first is of remoteness and overgrown vegetation. Director Martin Provost fills up the screen with green and the shape of a hunched scrubwoman named Séraphine Louis, later known as Séraphine de Senlis. As played by Yolande Moreau, Séraphine is a burrower, head held down at most times and on all fours sometimes.

She shuffles through her rounds in a shawl and an Eliza Doolittle straw hat, sometimes forgetting her shoes as she works. She pockets the breadcrumbs off the table of a woman she works for and siphons off some beef blood from the butcher shop. More mysteriously, she bottles the melted wax from the church votive candles. Her newest job is tending a vacationing gentleman, a tenant for her regular employer, making tea for him and cleaning his room. She notes that he sketches sometimes and keeps to himself, nursing some great unhappiness.

We learn that this vacationing German is William Uhde (Ulrich Tukur). Uhde is a lawyer and Paris gallery owner, noted as the first biographer of the artist Henri Rousseau. He was a patron with the discernment to buy Picasso and Braque back in 1905. We also learn that Séraphine, a seemingly cracked charwoman, is an artist herself—that she uses the stolen church wax as fixative for her hand-ground pigments. This untrained and uncelebrated artist paints pictures because the angels told her to do it.

Séraphine’s story is unique. Firstly, it isn’t conventional—she wasn’t bought short and sold high like Van Gogh. Uhde’s find seems ridiculously convenient: a gallery owner discovering that his chambermaid is a brilliant unschooled artist. Such was the man’s perception, though; the film doesn’t mention this, but Uhde’s first purchase of a Rousseau was from a janitor who had bought it as a souvenir of his time in Paris, demonstrating both that Rousseau had qualities apparent even before he was praised by critics, and that Uhde had a common touch, enough to make the deal. Sensibly, Séraphine neither makes him the hero of the story nor a symbol of the art market that gives a painter just enough to live on and takes his soul.

Provost takes an unsentimental view of Séraphine’s art; her raptures and her loose grip on sanity are closed off to us. It’s a private world we can watch from the outside and marvel at. Moreau inhabits this poor woman’s shell—it’s uncompromising, brawny acting. Provost provides a strong but not overstressed rhyme of this woman working in solitude with the life of this collector who had covert tendencies of his own.

After the war separates artist and patron, Uhde returns to Senlis to see a display of local artists, and he glances quickly at the work of giftless amateurs. Later, he is grimly amused at listening to a provincial newspaper critic trying to praise Séraphine’s work, but Uhde doesn’t really have the words for Séraphine’s art either; at one point, given pause by a large canvas, he merely stutters that it is “trés, trés belle.”

This very good movie hasn’t received the attention it deserves in America. In France, Moreau won the César for best actress. Possibly the reason it doesn’t have the word-of-mouth it needs is because the film doesn’t traffic in the upbeat idea of artistic after-life. Provost’s reserve is as fascinating as Séraphine’s vibrancy. As Moreau acts it, and Provost tells it, the feeling Séraphine had for trees was like the feelings of those pre-Colombian artists who had no word for art.