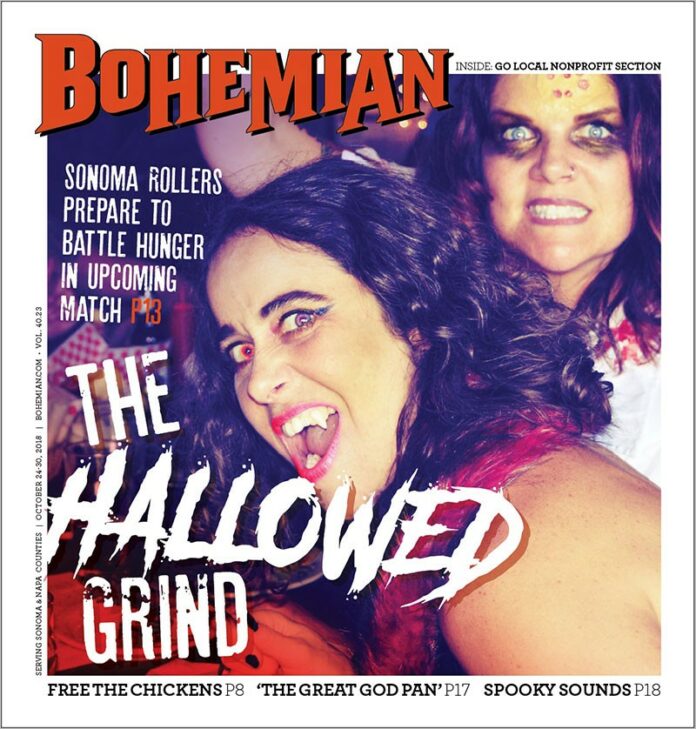 Eat to win with the women of Sonoma County Roller Derby

It was an otherwise quiet Saturday afternoon at the Toad in the Hole, the downtown Santa Rosa English pub off of Railroad Square. Couples hovered over pints of ale and plates of pasties, conversations steered toward “What the hell happened to you last night?” and there was subdued talk to my left that was centered around a wacko possum that had apparently gone nuts the night before near a fire pit.

Then the roller-derby women rolled in. And just like that, the Toad in the Hole was slammed, was rocking, was transformed, as about eight members of the Sonoma County Roller Derby, along with a couple of male hangers-on and a junior roller, wheeled in decked out in phreaky-hip Halloween attire for a photo shoot.

It should be a good one. The theme of the latest SCRD match is “Harvest,” and when the NorCal Vigilantes square off against the Ol’ Derby Bastards—the North Bay Bruisers will also do battle with the Wine Country Wreckers—well, know that there’s also a food drive underway under the lights of Grace Pavilion, just in time for Thanksgiving. Donations will be accepted at the match (doors open at 4pm) for the nonprofit Redwood Empire Food Bank.

Speaking of being hungry, I lingered for a while over a Toad in the Hole cheeseburger, whose sturdy countenance was verily meatloaf-ian, in an enjoyable and very British and stolid manner, and watched with amusement as various platters of sausages and salads, beers and other bevies, arrived at the boisterous Roller Derby table. As she rolled by again, I asked Swole Deztroyer if I could take a few pictures—and the crew, to say the least, was accommodating, as our cover photo this week amply demonstrates.

The local roller derby league is part of the national Women’s Flat Track Derby Association, founded in 2004 as Riot Grrrrl–inspired roller-derby redux took hold across this great land. The Derby Association is a business-league organization—a nonprofit in its own right—that exists to “promote and foster the sport of women’s flat track roller derby by facilitating the development of athletic ability, sportsmanship and goodwill among member leagues,” says Wikipedia, “and its governing philosophy is ‘by the skaters, for the skaters.'” I’d give the SCRD high marks in the goodwill-to-reporter department.

The SCRD club was itself formed in 2007—the same year, as it happens, that the Toad in the Hole opened for business (though given the homey vibrato that jukes this joint, it feels like the bar has been here forever). I grabbed a to-go box for the second half of the hamburger and the side of steak fries, and finished off the last of the pint and thrummed my pen for a while over a notebook—with an ear and eye tuned to the proceedings, now amusingly frantic and loud.

The bartender was getting a little harried but he’s a total pro. A platter of abandoned sausage tidbits hit the floor as a four-top prepared to pay their tab. On the TV screens behind the bar, men beat the crap out of each other in various sports postures.

And at the long table under the Toad’s chalkboard menu announcing $14 steak pasties, the SCRD women were totally whooping it up, polishing off pints, whaling away on greasy sausages and adjusting their wigs and their fake Dracula teeth for maximum photo effect. Nobody’s hungry on this otherwise quiet Saturday afternoon in this popular downtown bar for tattooed miscreants—and thanks to the efforts of the Redwood Empire Food Bank, nobody needs to go hungry during the holidays.