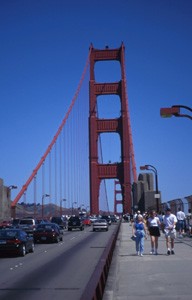 Making the bridge safe is a touchy subject

As a Santa Rosa High School senior, Renee Mulligan, now 47, completed a report on the Golden Gate Bridge for one of her final class projects. Despite her fear of heights, she walked across the bridge to conduct her research, marveling at the immense towers and cables suspending the steel span above the bay. She of course had no way of knowing that one distant day in the future, her 14-year-old daughter, who also grew up to attend Santa Rosa High School, would leap from that bridge and take her life.

Marissa Imrie, Mulligan’s daughter, jumped to her death on Dec. 17, 2001. Depressed and distraught over her daughter’s suicide, Mulligan seriously contemplated making the same leap for nearly a year. But therapy and a support group of mothers who had also lost children to suicide pulled Mulligan back from the brink. Today, she helps troubled teenagers at Santa Rosa High School talk about one of society’s last remaining taboos, suicide.

“I’m trying to take suicide out of the closet,” Mulligan says. “My path today is to educate teens that there is help out there, that there are people who love them, that suicide is a permanent solution to a temporary problem.”

Mulligan had hoped that The New Yorker article would generate renewed local interest for installing suicide barriers on the bridge. But aside from a few national news outlets, it appears that no one has followed up on the story. It seems that publicly discussing the installation of suicide barriers on the Bay Area’s most notable landmark is almost as taboo as suicide itself.

“There are some who will say that by doing this article, you’re killing someone,” says Mary Currie, spokeswoman for the Golden Gate Bridge District. When the number of suicides was approaching 1,000 in the 1990s, psychologists and suicide-prevention experts urged media to stop publishing suicide reports from the bridge because it might encourage others to jump. The blackout is still in effect today, Currie says. “The Bay Area media does not cover suicide at the Golden Gate Bridge.”

That hasn’t stopped people from jumping. The bridge district has considered several designs for suicide barriers over the years, the most recent being the so-called Z-Clip system, proposed in 1997. A series of guy wires linked together with clips, the system was designed to prevent would-be suicides from climbing over the bridge’s three-and-a-half-foot high pedestrian railing. The district rejected it because it failed to meet the criteria established for aesthetics, cost and effectiveness, Currie says. New alternatives are currently being explored.

But proponents of suicide barriers say the bridge district has no intention of addressing the problem.

“It’s the suicide icon of the world, and they have consistently done nothing about it,” says John Vidaurri, chairman of the Golden Gate Suicide Barrier Coalition, a group comprised of police officers, health-service workers and others who deal with the aftermath of suicide. The Eiffel Tower and the Empire State Building, once popular places to make the leap, have installed suicide barriers, but not the Golden Gate Bridge, he notes. “It’s the only public structure in the world that allows suicide.”

However, these protections are far from perfect, as an ABC 20/20 camera crew recently discovered. While filming a member of the bridge’s bicycle patrol, a man jumped to his death and the cameras caught the pedestrians gathered at the edge of the railing craning their necks downward to the bay.

“The suicide issue has been going on for years,” says Robert Guernsey, chairman of Citizens for a Safe Golden Gate Bridge. A self-taught engineer, Guernsey designed and patented a movable roadway barrier to divide traffic lanes on the bridge that was ultimately rejected by the bridge district in the 1990s. Since then, Guernsey has incorporated the suicide issue into his own efforts to make the bridge a safer place. “Anything to do with the bridge and safety, I’ve been there.”

Guernsey saw the demonstration of the Z-Clip system and disagrees that the suicide barrier was aesthetically displeasing. “You can’t see it because it’s real thin stainless steel cable; it allowed you to see over the rail.” He doesn’t have a lot of respect for the bridge district. “They’re supposed to do things by the book, but they don’t. They say they’re in the process of doing something, but then nothing happens.”

For her part, Currie says no one from the public is currently clamoring that loudly for suicide barriers. Vidaurri, admits that because local government budgets, including the bridge district’s, are currently strapped, his organization had been keeping a low profile, waiting for the time when such projects will become financially feasible. Public opinion over the years has tended to favor leaving the bridge as it is.

“I just think it is so archaic,” says Mulligan. “Someone is taking their life there every two weeks.” Her lawsuit is currently on appeal in U.S. District Court. It may be years before it is decided, but she remains patient. “I don’t want any money, I just want the barriers to go up,” she says.

“I don’t want any other families to experience the pain I did.”