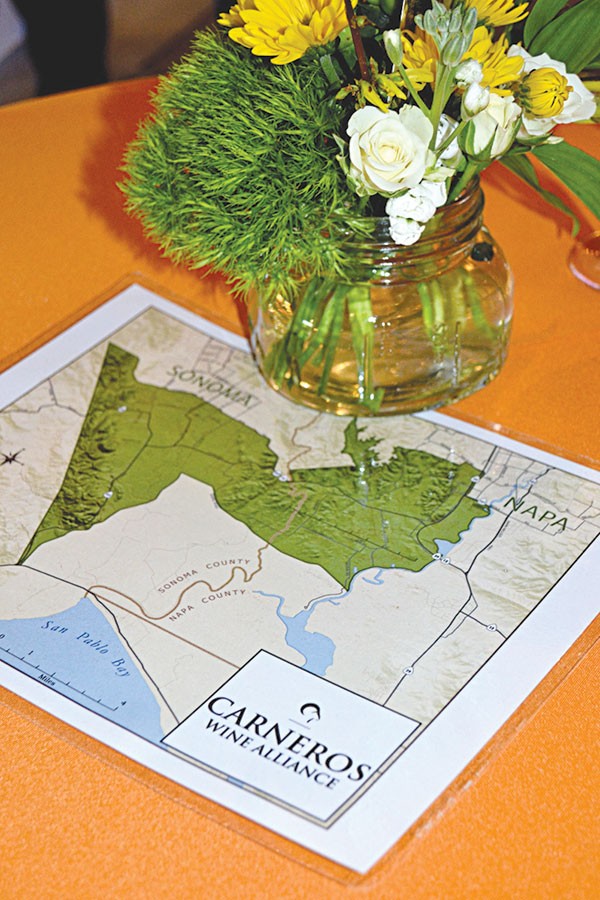 Zip up that windbreaker and take a closer look at Carneros

I have been attending the Carneros Wine Alliance’s annual barrel tasting for several years now, only partly because of the high-quality commemorative coffee mugs they hand out at the end of the event. I’m also trying to answer a question: Is there such a thing as a Carneros style?

But let’s back up for a minute—I realize that, if you aren’t familiar with the wines from this region, Carneros does sound a bit like an optional filling for your burrito. Taking a historical name for the region, Spanish for “the rams,” Los Carneros was established as an American Viticultural Area (AVA) in 1983. The region is unusual in that it’s shared between Napa Valley and Sonoma County, and was the first AVA to be defined mostly by its cool, windy climate rather than arbitrary boundaries—resulting in the ugliest mug on the map. I think it resembles the head and shoulders of a dragon, with whiplash.

The wines are much prettier. Carneros may seem dominated by sparkling wine producers, but most of the wines on offer recently at an intimate tasting at Cornerstone Sonoma were Pinot Noir and Chardonnay table wines. Sparkling wine producer Domaine Carneros offered a 2015 White Pinot Noir, a surprisingly fleshy, toasty wine infused with red fruit notes in the way a mineral water might be—with hardly more hue. After all, Pinot Noir is a major ingredient in traditional sparkling wines, and it represents
44 percent of the grape varieties grown in Carneros.

Chardonnay trumps Pinot at 46 percent of the appellation’s 8,000 vineyard acres. The 2015 Chardonnays I tasted were extraordinarily lean and refreshing, with the sweet tang of pink grapefruit and crisp apple; they were barrel-fermented but saw little if any malolactic fermentation. Is that what you can expect from Carneros Chardonnay? Not at all. Carneros is a top source of Chardonnay for Napa Valley’s butterball leaders—it’s all in the winemaking.

So what’s the point of an AVA designation, if not to guarantee a style of wine? An AVA is more of a signpost. To my eyes—or nose, rather—the Carneros signpost points mostly to a style of Pinot: waxy aromas of Christmas candle, cinnamon, dried rose petals and fruits—a smoky, sensuous potpourri.

While this impression held up for some of the member wineries’ exciting 2015 Pinots, consistency was, unfortunately, elusive, even for the most iconic of Carneros Pinot Noir vineyards. Case in point, Garnet Vineyards’ bright, lively, red-cherry-toned Pinot from Stanly Ranch, which dates from the 1950s, reminiscent of Jayson Woodbridge’s Cherry Pie Pinot from that same vineyard. So, aha? Not according to Starmont Winery’s lush, darkly fruited 2015 Stanly Pinot Noir. More study required.