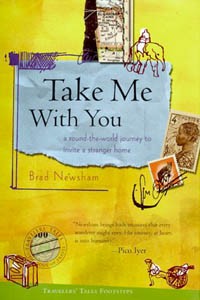 S.F. cabdriver circles the globe in search of the perfect guest

THE TOURIST is a fairly recent invention of social history. Before the end of World War II, most people who ventured outside their own countries were engaged in serious tasks, like diplomacy or battle. There certainly weren’t enough leisure travelers to support an entire industry.

Today, of course, tourism is a huge business. For some, it’s an affordable luxury; for others, a source of survival. Even a lower-middle-class American can scrape together the money for a Third World tour. But in countries where there is no middle class, many people barely earn enough to stay alive. Travel for its own sake, for something as intangible as adventure, is out of the question.

When San Francisco cabdriver Brad Newsham decided to use the money from the sale of his first book to finance a trip around the world, he was thinking about an idea that had intrigued him for years. “When this trip was over,” he writes, “I would surprise one of the people I had met along the way, someone who had never been out of his (or possibly her) native country, with an invitation to visit and travel around the United States with me for one month–my treat.”

From this generous impulse sprang the journey that would lead to Newsham’s second book, Take Me with You (Travelers’ Tales; $24). Over the course of 100 days, as Newsham traveled a crescent path through the Philippines, India, Egypt, Kenya, Tanzania, Zimbabwe and South Africa, he encountered an array of friendly strangers. And from each one who seemed like a promising guest, he collected an address.

“I was uncertain as to just how I would decide whom to invite,” Newsham writes. “Maybe I would meet someone so compelling–so kind, eccentric, or just so much fun–that the choice would be obvious. But if that didn’t happen, I would simply drop everyone’s name into a hat and draw one out.”

Newsham is an observant and genuinely respectful tourist, the kind one wishes was more representative of Americans in other countries. As a cabdriver, he’s well versed in the art of striking up a conversation, and he writes with the fascination of someone who talks and listens with equal enthusiasm.

The tale of his journey through some of the poorest and most beautiful places in the world is an engaging read, sprinkled throughout with snapshots of the potential guests. There’s Tony, an easygoing Filipino mountain guide with a glass eye; Shubash, the hippest rickshaw driver in the holy city of Varanasi; Mohammed Ali, a professional ear cleaner in New Delhi; and Takesure, a restless Zimbabwean office worker. There are also the beggars of Manila, Calcutta, and Cairo whose names Newsham never learns, like the girl whose English is limited to “No mama, no papa.”

Before he began his trip, some of Newsham’s friends told him that it seemed to smack of Western paternalism. Newsham considers this possibility, wondering just how altruistic his gesture really is–and how many mouths he could feed for the price of a plane ticket. Ultimately, though, he chooses to follow through with the plan.

“It seems unquestionable to me that every act a person performs tips the balance of the world,” Newsham writes. “Do something nice and the world is immediately a nicer place. . . . Share your blessings and the world is instantly more generous, easier, happier. And I want to live in a happier, easier world. What better way to bring that about than by giving away the thing that, so far in life, had meant the most to me–the chance to travel?”