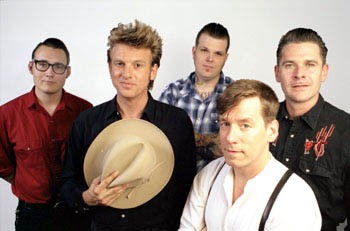 It was like having a really great ’58 Ford Fairlane that had a tired engine but is a really old car that you want to save,” says singer and guitarist Chuck Mead, describing the restoration of the alt-country band BR5-49. “We overhauled it with a new Mustang engine, and it runs great now!”

Following the departure last year of founding member and co-lead vocalist Gary Bennett and longtime bassist Smilin’ Jay McDowell, Mead and the remaining members of this highly regarded act set out to “retool” BR5-49 (the name is taken from a phone number in a Junior Samples Hee Haw sketch). Bennett’s loss could have spelled doom: he founded the band a decade ago while working at Robert’s Western Wear, a clothing store and bar located in Nashville’s old-town district on lower Broadway. And it was Bennett who set the standard for the band’s virtuosity and irreverent songwriting.

At the height of Music City’s 1990s’ big-hat parade–one that saw Nashville usurped by Garth Brooks, Shania Twain and other pop acts–BR5-49 became the first retro-country band to gain national attention and a major label contract, releasing their eponymous debut in 1996. The band quickly became known for its impressive instrumental chops, what music critic Mark Deming once dubbed “grits and high spirits,” and a penchant for penning songs about such quirky pop-culture artifacts as 1950s pinup girl Bettie Page (immortalized in BR5-49’s homage “Bettie Bettie”).

A Grammy nomination followed, Playboy dubbed them “Nashville’s hippest band” and BR5-49 opened tours for Bob Dylan, the Black Crowes and other stars.

“After the guys quit, we didn’t know what to do,” says Mead. “We just thought we’d go back to playing on lower Broadway.”

And that’s what they did–for a while.

In the clubs, Mead and the other surviving band members encountered a loose-knit network of young alt-country players known as the Hillbilly All-Stars. Mead soon started feeling energized about playing again and decided to climb under the hood, so to speak, to rebuild his old band. He recruited All Stars vocalist and guitarist Chris Scruggs–whose grandfathers were the legendary Earl Scruggs and Louisiana Hayride performer Tex Dickerson, and whose parents were the famed Nashville musician Gary Scruggs and maverick singer-songwriter Gail Davies–as well as bassist Geoff Firebaugh, a veteran of several Pacific Northwest punk bands.

The revamped lineup hit the road last year for tours of the United States and Europe before entering the studio to capture the band’s newfound magic on record. “We had no record deal,” says Mead. “We had no schedule to meet. We paid for the studio out of our own pockets. We simply wanted to get in there and make our songs sound like we’d always wanted them to sound, and we wanted to have fun doing it. The only expectations we had to live up to were our own.”

The resulting work, Tangled in the Pines, proves that BR5-49 can still crank out twangy, beer-soaked, honky-tonk anthems. The new material, like the swampy blues-drenched “Run a Mile,” which Mead describes as “straight-up creepy hillbilly music,” and the juke-joint reverie “When I Come Home,” stack up with the best the band has forged in the past.

“We dug deep for this record,” says Mead. “And putting all the songs together unwittingly ended up being kind of a story. In a sense, it tells a tale about guys trying to ‘make it’ and their journey through themselves and their world. It’s a record about chasing away–and in some cases trying to outrun–your demons, and then coming back for more. It’s a story about us.

“It just goes to show you what you can do when you decide to outlast the bastards.”

The similarities between the Vietnam War and the mess in Iraq are striking. So this incendiary work by avant-garde composer Phil Kline (a member of the Bang on a Can All-Stars) is uncanny in its simple brilliance. On this new CD, Kline pairs “Three Rumsfeld Songs” (with text culled from a worldwide e-mail that mocked the skewed logic heard at those surreal press briefings given by Secretary of Defense Donald Rumsfeld) with “Seven Zippo Songs,” which contain lyrics drawn from the inscriptions U.S. troops serving in Vietnam scratched on their Zippo lighters–lighters that were sometimes used to torch the thatched roofs of rural huts. The latter is a stirring series of themes on going to hell, getting bummed, getting high, getting horny, getting bored, dying and finding God. The disc concludes with an eerie rewriting of the Doors’ 1967 Oedipal epic “The End,” included in its original form on the Apocalypse Now soundtrack. Life imitating art imitating art . . .