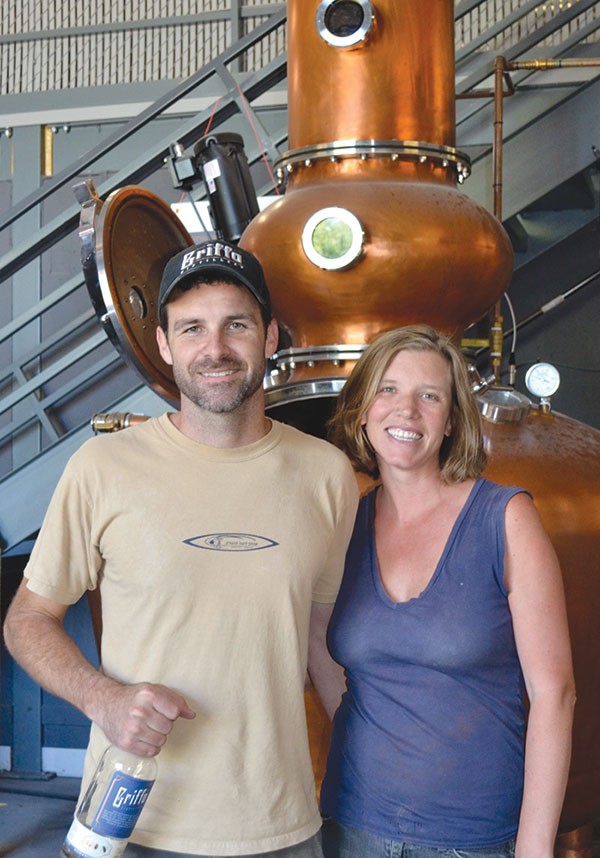 Among the buzzwords in craft spirits, a very buzzy category of late, is “London-style” craft gin. It’s more than just a marketing tag, according to Griffo Distillery’s Michael Griffo.

“It’s harder to do London-style,” Griffo says above the roar of the grain mill in the Petaluma distillery that he opened in 2015 with his wife, Jennifer, who is standing on a ladder, banging away on a hopper so that the milled rye doesn’t stick in the chute. The Griffos don’t seem to mind doing things the hard way.

To make London-style, Griffo explains, herbs and citrus are infused during the distillation process, instead of being added later and separately. During a three-year period of recipe experimentation, they tried it the other way but found that the aromas and flavors remained distinct, and the gin was not as complex as they wanted.

They also had to decide which method of infusion they preferred: the botanicals may be dangled in the path of the alcohol vapors, steeped like tea inside a bag, or left to swirl randomly in the copper still. Choosing the latter, Griffo says, gives each aroma and flavor “equal opportunity” for extraction.

Griffo’s Scott Street gin ($35), named for the industrial stretch of road they share with several craft breweries, is made with organic, non-GMO corn, which they feel makes a softer, sweeter spirit than other grains. Opting for organic ingredients wasn’t necessarily a philosophical move, says Griffo. “The organic stuff tasted far better.”

They can’t call the gin organic because two of the 10 botanicals are wild-harvested, like the Meyer lemons rounded up from friends’ backyard trees when they do a gin run. Juniper berries from the local landscaping, however, didn’t compare to the Croatian version. To hit just the right notes for their heady, juniper-forward gin, which was recently awarded a gold at the 2016 San Francisco World Spirits Competition, they tried dozens of sources. Even the qualities of coriander seed vary, Jennifer Griffo explains after milling the rye, so they settled on a coriander that’s 10 times more expensive than what you get in the store.

Standing in an empty side room that will be their tasting room in a month or two, Griffo says that such obsessive attention to their process, as well as the transparency of their operation, is essential to the business. “I think it’s an extension of the farm-to-table movement,” Jennifer Griffo says of craft spirits. “People care about what they are consuming.”

Previous ArticleCelebrate Halloween in July with Isaac Rother & the Phantoms