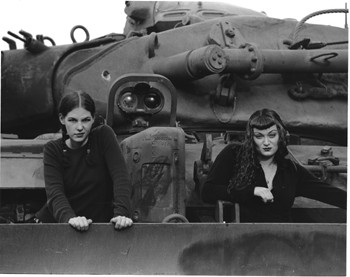 ‘Untitled’: Santa Rosa Junior College student Dillon Crossman used his roommates Rose and Jacquie as models, posed here on the weapons moldering at the Santa Rosa Armory near their home.

Wow. A huge shout-out to all who entered our second annual photo contest, this year focused on visions of the visage.

We received some 60 submissions via e-mail and filled an emphatically nonstatistical shopping bag with the hard-copy submissions (they had to be toted around for judging, thus the bag . . . oh, you don’t care).

Having thus winnowed the submissions down to the purely amateur, we are thrilled with the richness of the offer, the thoughtfulness given to the project, the efforts extended and the breadth of humanity our contestants strove to reproduce.

Our cover boy this week, nine-year-old Vaughn Higginbotham, was just goofing around at his grandma Lauralee Aho’s Sebastopol home, putting clothespins on his ears, nose, eyebrows and finally, his tongue–like you do when you’re nine, I suppose.

Aho grabbed her camera when Vaughn pinned his mouth wide and we thought that his insouciant attitude makes a great Christmas week image. We hope that you agree!

Thanks to all who took the time, imagination and effort to enter. It’s always a gas to see what others see, and the full overview of the North Bay as represented in your photographs was informative, enlivening and, frankly, quite stunning.

‘Untitled’: Bodega Bay social worker Jude Mariah captures octogenarian Doddie Spuelda enjoying the roses at the Burbank Heights and Orchards senior housing complex. Having moved here from Colorado three years ago to be closer to her family, Mrs. Spuelda is an avid horsewoman and outdoor enthusiast.

‘Sonoma Barn Couple’:Sonoma County health worker Steve DiVerde, a Guerneville resident, was walking past this couple’s barn, located now near Sonoma’s bustling downtown district. He asked to take their picture as they discussed the ever-shortening distance between their farm and the encroaching sprawl.

‘Sonoma Gardener’: Santa Rosa dental assistant Amanda Burton was out roaming for photos when she came across this gentleman working outside the Ferrari-Carano Winery. With no language in common, he allowed her to take three photos before returning to his work.

‘This is Chris’: Speaking from way off the grid over the wavering fuzz of her cell connection, Cynthea Knight explains that Chris Marquand is not only an organic farmer but also a human beatbox master.

‘Ranger Rick’: Occidental resident Bonnie Macias found erstwhile town champion Ranger Rick perfectly aligned with a stop sign. A well-known West County character, Rick ‘sweeps up, gives directions, keeps the kids in line, trims trees, directs traffic and has an opinion for you whether you want one or not,’ Bonnie reports.