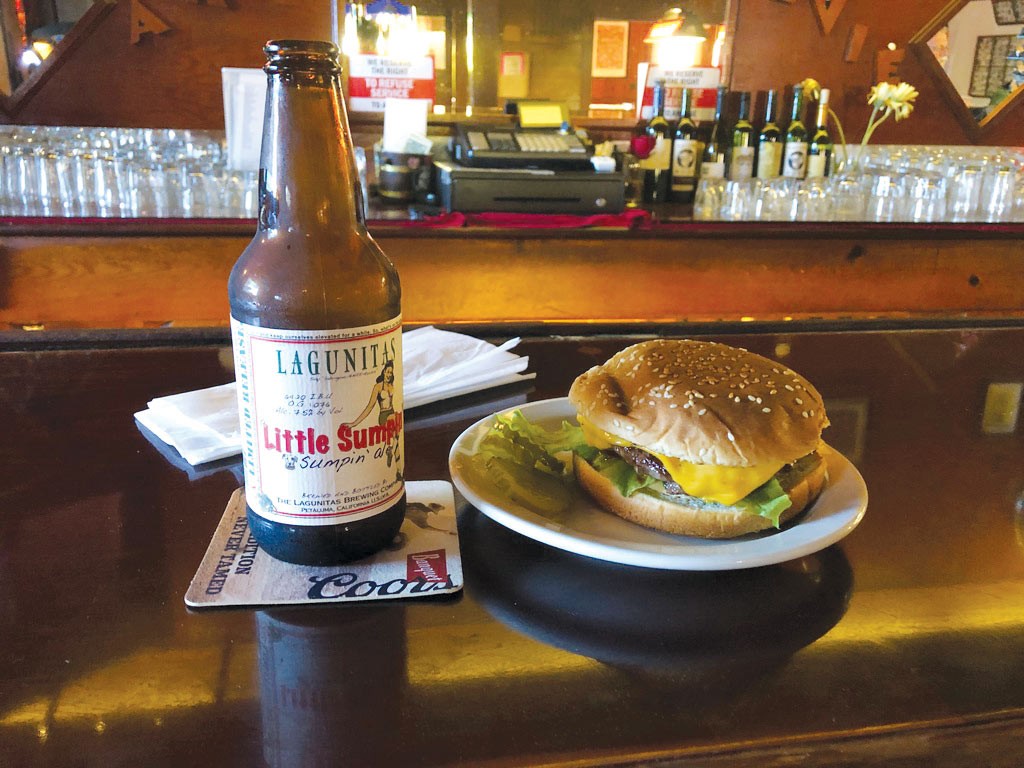 There are towns. There are towns that tourists visit. And, finally, there are touristy towns. I’m happy to report that Bodega and Bodega Bay fall into that middle category.

They are two places that, thanks to quirks of history (and probably a ton of zoning laws), it’s impossible for stores selling only vegan oatmeal cookies to exist in. And yet they provide just about everything visitors want in a memorable day trip: good food, beautiful nature and a few places tobuy meaningful souvenirs. And, most importantly, Bodega and Bodega Bay are towns where locals and tourists mingle without any grumbling on either side.

Bodega Burger
Growing up, I lived under the impression that the Casino Bar & Grill was California’s tiniest Indian casino. But, stepping inside for the first time, I discovered there was nary a slot machine nor poker table in sight. Instead, I found rustic décor and what is likely the shortest Sunday lunch menu in the North Bay:

To the grill’s credit, the menu expands considerably later in the day to offer diners BBQ oysters and dishes featuring local ingredients. Chef Mark Malicki creates inspired dinner menus that change daily. But for someone stopping by for a quick lunch, the burger was the perfect pairing with a Lagunitas Little Sumpin’ Sumpin’ Ale.

My belly more than satisfied, I spent my change indulging in my favorite childhood pastime: pinball. With everything in the North Bay getting more expensive all the time, getting five balls for a single quarter on the Grill’s Indianapolis 500 pinball machine was a welcome treat.Souvenirs and Stories
Visit Bodega on the weekend, and you’ll find two excellent places to pick up an enduring memory of your trip. Seagull Antiques Gifts & Collectables (17190 Bodega Hwy) sells knickknacks of every shape and size. Visit on the right day, and you might find a prop from The Birds for sale.

At Bodega Landmark Studio Collection (17255 Bodega Hwy), proprietor Lorenzo De Santis offers much more than just lithographs, photography, and ceramics from some of the North Bay’s most talented artists. Upon telling him I was a writer, he mentioned he was writing a book on music in the early 1970s. Then he motioned behind the counter, to one of his photographs of George Harrison performing just a few years after the Beatles’ breakup.

He opened a drawer and showed me additional photographs of Harrison, Steve Van Zandt, Bruce Springsteen and Grand Funk Railroad. “Were you a journalist or band photographer?” I asked, noting he’d taken the pictures from either the front row or on stage. A little bit of everything, he said. By this time, a group of visitors had joined us to hear more stories. De Santis pulled out a photo he’d taken of Grand Funk Railroad performing in 1974. He told us it wasn’t until he’d enlarged the image that he discovered a news camera had been pointed right at him at them moment he’d taken the photo. One YouTube search later and—lo and behold—he found himself, 45 years younger, face obscured by a long telephoto lens.

Alfred Hitchcock’s furious fowl may have made Bodega and Bodega Bay famous around the world, but it’s the locals who keep this place special.

Up on The Head
Bodega Head is much more than Sonoma County’s best place to escape the summer heat. Not only are there level walking trails with great views, there are plenty of flat areas where you can unfold your chair, look out over the ocean, and imagine yourself the lord of all creation. If you should visit empty-handed, relax at what is likely the county’s most secluded picnic table. From there you can gaze upon Tomales Bay and the seals perched on Bodega Rock.

Although the weather report had called for fog, clouds, and chilly temps, I was greeted by clear skies, a warm sun and just the slightest breeze. The parking area was nearly full, and families were taking out lawn chairs and coolers. One teenage girl even had a guitar. Photographers sporting the latest DSLR cameras waited for the perfect shot of the crashing waves and birds.

I’ve been to Bodega Head more times than I remember, but each visit brings something new. Sometimes it’s the flowers or butterflies, but on this visit, it was the water. Maybe it was the time of day or year, but the water didn’t look like what you’d associate with Northern California. The bright blue was something reminiscent of Capri or the Amalfi Coast. I’ve never been to either of those places, but at that moment it was easy to imagine Roman ruins along the Sonoma coast.

Bodega Head is big enough that even if the parking lot is full, it never feels crowded. On my walk around the cliff, I heard no fewer than three foreign languages. Yet, there were plenty of locals. That’s the great thing about this place—it brings all kinds of people together.

Battle of the Oysters
It would be an injustice to write about Bodega Bay and not discuss the seafood. In the winter, crab is the star, but since the crab pots are still tied up for a few more months at Spud Point Marina (1818 Westshore Rd.), I had to turn to the Bay’s year-round favorite: oysters.

“Come Shell or High Water” greets visitors when they step inside Bodega Bay Oyster Company (12830 Valley Ford Rd.), a local institution that, despite its name, is actually in Petaluma. I ordered the sampler ($12)—two extra-small, two small, and two Kumamoto oysters—and took a seat outside. Valley Ford Road may get a bit congested on the weekends, but you can’t beat the view. A little trash can in the bottom right-hand corner of my vision would have made the Windows XP background experience complete.

Having traveled to the Pacific Northwest the week before to sample the region’s oyster offerings, I needed to reacquaint my palate with our beloved bivalves. The sampler arrived, and I dug in. In my completely biased opinion, I’m happy to report that Washington state oysters don’t hold a candle to ours. And, if you should make Bodega Bay Oyster Company a stop during your summer travels along the coast, the Kumamotos are definitely worth the splurge. Yes, each oyster may have no more than a grape-sized amount of meat inside, but the buttery, briny flavor sure packs a punch.

Branching Out…or Not
From Bodega or Bodega Bay, it’s possible to drive to so many places in less than an hour: Sebastopol, Dillon Beach, Jenner, Occidental, Marshall, Point Reyes Station, etc. By all means, take some side trips this summer if you’re so inclined. But if you’d instead relax than wander, there’s no better place to end a lazy summer day than watching the sunset from Bodega Head.

I’ll see you there.