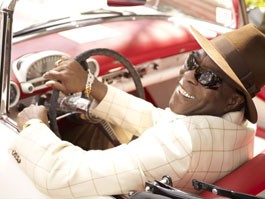 Blue to the Bone

Despite his hard-drinking, hypermasculine persona—a hulking physical presence, guitar licks that singe, a voice like a wolf and a huge mouth ready to bite your head off—George Thorogood is pretty modest. “My writing ability is very limited, as is my singing ability,” says the longtime purveyor of raucous blues rock, who plays the Marin Center with Buddy Guy on July 30. “As far as my songwriting ability—what limited ability I have—it’s just about used up. How many more Chuck Berry/Elmore James/Bo Diddley things can I do without making it a joke?”

According to Thorogood, there’s “genius” and also “clever.” And for him, there’s no such thing as self-delusion. “I’m not Bob Dylan, where I know I’m going to work the rest of my life,” he admits. “I only got two or three licks in me, and as far as my vocals go, let’s face it, I’m no Aretha Franklin.”

This type of brutal honesty is jarring, sure. But Thorogood sees it as the way of the world. “There are actors like Marlon Brando and there are actors like Bridget Fonda,” he claims, “but Bridget knows what she’s good at.” And by mastering his own expertise, no matter how limited, Thorogood has been one of the most consistent American performers since he and the Destroyers emerged from Delaware in the early ’70s. He and his band still play to packed houses, delivering airtight sets of raunchy, barroom classics like his abrasive cover of Bo Diddley’s “Who Do You Love” and “Bad to the Bone,” his universal hit.

It’s not like modest chart success bothers the ever-humble Thorogood. “A guy once asked me, ‘How does it feel to be a one-hit wonder?'” he recalls, “and I said, ‘A lot better than being a no-hit wonder.'” Possessing a refreshing sense of old-school professionalism, he’s happy to play fan favorites like “One Bourbon, One Scotch, One Beer,” even if his peers begrudge the obligation. “Steve Miller and John Fogerty, I see those guys periodically and they say, ‘I don’t want to play my hits, I want to get creative,’ and I say, ‘Why?'” Thorogood says. “If a promoter came up to me and said, ‘I don’t want you playing anything off your last five records,’ I’d say, ‘Great! How much do you want to pay me?'”

Thorogood’s levelheaded work ethic has stemmed from a fear of “getting fired” since his teenage years, but it’s also just reality. “The level of competition for entertainment now is sky-high,” he says. “You can’t just be good anymore. You can’t even be very good—you have to be great, all the time, every night.”

This refreshing desire to please his audience naturally extends to his opinion of releasing new albums, an act to which he’s grown increasingly reluctant. “I went to see Paul McCartney live, and nobody wanted to hear his new stuff,” he remembers. “Are you a fan of the Rolling Stones? Do you really think they need another album? I’m just gonna play live, baby.”

Although one last album is on its way, don’t expect it to reveal anything new about Thorogood. “I never said, ‘I went through this really bad divorce or my father passed away and I wrote this song,'” he says. “I share pleasure, but I keep the pain to myself.”

Chicago blues master Buddy Guy, on the other hand, has made a fruitful career of bringing pleasure through the expression of pain. And the Rock and Roll Hall of Famer—who unwittingly taught a young Hendrix his stage tricks and bridged the gap between blues and rock—is loving the studio, thanks to the just-released Skin Deep. “This is the most excited I’ve been about an album in quite a while,” Guy says of the new album, his very first fully comprising original material. “Even the first time Muddy Waters ever asked me to play with him, I don’t know if I was as excited about that as I am this.”

While not a confessional songwriter in the traditional sense, Guy calls Skin Deep his most personal record yet, continuing the back-to-roots trend of 2001’s Sweet Tea. The songs are largely informed by his upbringing in Lettsworth, La., including the poignant anti-racism title track. It was inspired by his memories of a white childhood friend whom he was forced to stop playing with around age 13. “We used to have a flashlight, and at night we would shine it through our hands,” he recalls, “and all we saw was red.”

While some may think the song is timely considering Obama’s candidacy, they’d be wrong. “I didn’t have the slightest idea I’d live to see a . . . I’m not going to call him African American or black, because he’s not,” Guy says, practicing what he preaches. “He’s as much white as he is black.”

Throughout his career, though, Guy has found observance to be his greatest source of creative inspiration. “You could be working construction and hear someone say something and turn it into a song,” he says. “You don’t have to live a bad life to write a good blues song, but you probably know someone who did go through it, even if you didn’t.”

Guy turns 72 the day of the upcoming Marin Center show, yet the desire to make Skin Deephad nothing to do with impending mortality. “I’ve wanted to do that from Jump Street,” he says. “Fifty-one years ago, I wanted to do it, but I didn’t have any power.” Shady business methods turned him off to the process in a big way. “Even if I wrote a song in the Chess [Records] days, my name wouldn’t even be on some of these songs,” Guy says. “Like, someone would come in and say ‘Skin Deep’ is all right, but you should change it to ‘Skin Weep.’ Then they’d claim the song.”

As an expert of spontaneous performance, Guy was also annoyed with producers’ constant tinkering. “There’s no time when you’re making a professional record and a producer’s telling you, ‘You sound too much like Tom, Dick and Harry,'” he insists. “When I was in the studio, I was being taught how to play, and I think you’re supposed to play what you already know.”

Like Thorogood, Guy still relishes playing live the most, although his wild-man antics are not what they once were. “You slow down when you get to 72 years old,” he says laughingly. “I can’t jump off the stage like I used to do, but I’ll still give you the best I got.” Judging from his scene-stealing turn last year in the Rolling Stones’ Shine a Light, he means it. It’s a good thing for us that true bluesmen never quit. “I don’t know no blues player who’s ‘retired,'” Guy says. “Blues players just drop.”